Raffaele Marciello and Timur Boguslavskiy are back on top of the Sprint Cup standings after the Akkodis ASP Mercedes-AMG duo scored a resounding victory in today's race at Magny-Cours.

The #89 crew earned their second victory in four races and, like the previous triumph at Brands Hatch, it was the result of a blistering opening stint by Marciello and a composed finish from Boguslavskiy. This gave Akkodis ASP a one-two on home turf, while AF Corse earned Silver Cup honours with its Ferrari and McLaren squad JP Motorsport bagged Pro-Am victory.

Marciello set a new series lap record to take pole for this afternoon's 60-minute contest and maintained his advantage from teammate Maximilian Götz (#88 Mercedes-AMG) at the start. The Swiss driver immediately set about building an advantage, posting a succession of rapid laps as he disappeared into the distance.

Chris Mies (#33 Team WRT Audi) moved into third thanks to an excellent getaway from fifth on the grid, but there was disaster for teammate Dries Vanthoor who ran out of space as the pack streamed through turn 1. The Belgian skated across the gravel and was lucky to keep the #32 car pointing in the right direction, losing 10 places to run 14th at the conclusion of the opening lap.

Götz held on to second spot during the early stages, but Mies was on the hunt. The two experienced German drivers went wheel-to-wheel shortly before the 15-minute mark, the Audi man holding his nerve to complete the pass. Patric Niederhauser (#25 Saintéloc Junior Team Audi) was determined to follow Mies through and made contact with the #88 car in the process, opening the door to take third.

Vanthoor spent much of the first stint in 11th, running behind the #54 Dinamic Motorsport Porsche of Christian Engelhart. Unable to make a move, Vanthoor elected to take an early stop and hand over to Charles Weerts. Despite a characteristically fast turnaround from Team WRT the #32 Audi remained behind the #53 AF Corse Ferrari, which had stopped at the same time.

The top three ran long, with Marciello pulling out a 15-second advantage by the time he made his stop to hand over to Boguslavskiy. Jean-Baptiste Simmenauer replaced Mies at the wheel of the #33 Audi, while Aurélien Panis took over from Niederhauser. Once the stops were complete Boguslavskiy enjoyed a commanding lead over Simmenauer, while Jim Pla split the Audi runners after assuming control of the #88 Mercedes-AMG from Götz. Pierre-Alexandre Jean held fifth in the #53 Ferrari, followed by Weerts in the #32 Audi.

The action now centred on the battle for second, with Pla closing on to the rear of the #33 Team WRT Audi and Panis coming with him in the #25 Saintéloc machine. Simmenauer did well to keep his cool and hold second spot, but his podium chances were scuppered by a 10-second penalty for an unsafe pit release. The #33 had been sent out into the path of the #188 McLaren, a move that the stewards deemed worthy of punishment.

The #25 Audi was also hit with a penalty as a result of Niederhauser's forceful pass on Götz during the opening stint. With the Saintéloc entry docked five seconds, the battle for the podium was effectively settled. The victory was also beyond doubt as Boguslavskiy brought the #89 Mercedes-AMG home to win by 13.6 seconds, a margin rarely seen in the Sprint Cup. Pla took second to secure an Akkodis ASP one-two, while the #25 Audi was third to give Saintéloc Junior Team a podium finish on home turf. The #33 Audi was classified fourth after its penalty. 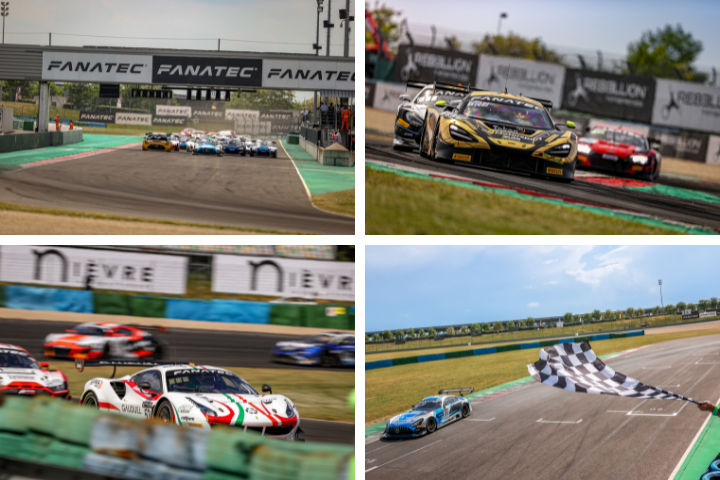 The #53 AF Corse Ferrari came home in fifth overall to ensure a comfortable Silver Cup win, the third in four races for Jean and De Pauw. The former was at the wheel for the finish, holding off Weerts in the #32 Team WRT machine. The Belgian led a quartet of Audi runners with the #66 Attempto Racing car followed by the #12 from Tresor by Car Collection and the #99 Attempto entry, the latter taking runner-up in the Silver classification. The #54 Dinamic Motorsport Porsche captured the final points-paying position as Adrien De Leener held off Valentino Rossi (#46 Team WRT Audi) for 10th.

Pro-Am honours went to the #111 JP Motorsport McLaren, which earned its second class win of 2022 after starting from pole position. Indeed, Christian Klien ran among the overall top-eight before handing over to teammate Patryk Krupinski. The car dropped down the order due to the minimum pit stop time served by Pro-Am runners, though its class advantage was not in doubt. Its winning margin was more than eight seconds over the #21 AF Corse Ferrari, which secured its second runner-up finish in succession.

Like yesterday's opening race there were no major incidents in today's contest. A number of drivers took to the gravel as they pushed to complete the weekend on a high, but the safety car was not called into service. A clash between the #26 Saintéloc Junior Team Audi and the #52 AF Corse Ferrari briefly left the latter stranded at the Adelaide hairpin, though Andrea Bertolini was able to recover to the pits and retire.

Today's result sees Akkodis ASP move back to the top of the Sprint Cup teams' and drivers' standings, with Marciello/Boguslavskiy holding an 11.5-point advantage over reigning champions Vanthoor/Weerts. Marciello has also leapfrogged the Belgian duo at the top of the overall Fanatec GT World Challenge Europe Powered by AWS classification, while Akkodis ASP has closed to within 3.5 points of WRT in the combined teams' championship.

Indeed, the 2022 season is quickly developing into a fierce confrontation between two of the most accomplished outfits in global GT racing. They will resume battle in three weeks' time when Fanatec GT World Challenge Europe Powered by AWS tackles one of its annual highlights: a six-hour race into the sunset at Circuit Paul Ricard (3-5 June).