Belgian Laurens Vanthoor and Brazilian Cesar Ramos dominated the Qualifying Race for the opening round of the 2014 Blancpain Sprint Series at the Circuit of Nogaro. The #1 Belgian Audi Club Team WRT Audi led from start to finish having started 2nd on the grid. Belgian Audi Club Team WRT pairing Rast-Ide crossed the line in second, but were later disqualified due to a technical infringement. That promoted the #6 Phoenix Racing Audi of Winkelhock and Mayr-Melnhof to second and the #0 BMW Sports Trophy Team Brasil BMW of Jimenez and Bueno to third. The first Silver Cup win of 2014 was conquered by the #4 Belgian Audi Club Team WRT Audi of Vincent Abril and Mateusz Lisowski, finishing an excellent seventh overall as well. Pro-Am winners Peter Kox and Marc A. Hayek finished in 12th overall.

When an endless stream of rain clouds arrived over the Nogaro Circuit on Easter Sunday morning, it was obvious that the first Qualifying Race of the 2014 Blancpain Sprint Series would be declared a wet race. Polesitter Jeroen Bleekemolen, driving the #28 Grasser Racing Team Lamborghini, had never before driven on the Nogaro track in the wet, and that lack of experience would cost him dearly at the start.

Belgian Audi Club Team WRT team-mates Laurens Vanthoor and René Rast passed the Dutchman in the first couple of corners, but Bleekemolen managed to hold on to third, in front of his countryman and Lamborghini-colleague Peter Kox. Behind, Alex Zanardi, in the #33 ROAL Motorsport BMW, was caught out by the wet conditions and slid into the grass. The former F1 driver managed to continue however.

Shortly afterwards, the pit window opened. The driver change on the #28 Grasser Racing Team Lamborghini took more time than scheduled, but Hari Proczyk still managed to hold on to second. The lead of Cesar Ramos’ Audi – who had taken over from Vanthoor – had doubled from 12 to 24 seconds. Proczyk was also under pressure from Enzo Ide in the #2 Belgian Audi Club Team WRT Audi, and fifteen minutes before the end of the race there was contact between the Lamborghini and the Audi. Proczyk ended up in the gravel trap and dropped to 18th.

Going into the closing stages of the race, Audi occupied the top three positions, with Niki Mayr-Melnhof in the #6 Phoenix Racing Audi in third. Sergio Jimenez in the #0 BMW Sports Trophy Team Brasil, having started the race in ninth, tried to close the gap with the Austrian, but the Brazilian eventually had to settle for crossing the line in fourth. The disqualification of the #2 Audi moved up the #6 Audi and #0 BMW, giving the Brazilian BMW team their first podium finish since they entered the Series. The final points in the first Qualifying Race of the 2014 Blancpain Sprint Series went to the #3 G-Drive Racing Audi of Guilvert and Ortelli, the #84 HTP Motorsport Mercedes of Buhk and Götz, and their HTP team-mates Dusseldorp and Afanasiev.

In the Silver Cup the Audi pairing of Vincent Abril and Mateusz Lisowski coped very well with the difficult conditions, leading the category from start to finish. A late push of the Polish driver meant the duo ended up in an excellent seventh overall as well. Pro-Am winners Peter Kox and Marc A. Hayek, President & CEO of Blancpain, also looked set for a great overall result, but gearbox problems in the second half of the race saw them drop to 12th overall.

Laurens Vanthoor (#1 Belgian Audi Club Team WRT Audi): “I knew Jeroen lacked some experience on a wet Nogaro track and last night in my bed I figured out how I would overtake him in the first or second corner. The plan worked marvellously. It made my life during the opening half of the race a whole lot easier. If we manage to repeat this process for the main race – have a good start, create a gap, and win – it would be a dream start of the championship.”

Cesar Ramos (#1 Belgian Audi Club Team WRT Audi): “This was my first race in this Series and to be on the highest step of the podium afterwards is just amazing. Laurens gave me the car in an excellent position and all I had to do was to bring it home. Of course, now the pressure is on me to do the same during the main race, but I am convinced that together with the Belgian Audi Club Team WRT we can manage to win again on Monday.”

Niki Mayr-Melnhof (#6 Phoenix Racing Audi): “Markus had reported a slight lack of grip during the opening laps, but when the handling of our Audi improved he still managed to give me the car in third position. After the driver change, I immediately felt that it was indeed in excellent shape, and I managed to catch up with Enzo and the Lamborghini. Then the track was drying up however and Enzo increased his pace, so I could no longer challenge him for second. To be able to start the main race from the front row should give us the possibility to at least have another podium finish tomorrow.”

Cacá Bueno (#0 BMW Sports Trophy Team Brasil): “This first trophy is a huge reward for all the hard work we put in. This team has improved a lot over the last twelve months. One year ago we knew none of the tracks of this Series, but now we are getting there. Taking a win will still be difficult, but podium finishes are now a real possibility. Maybe we can take one in the main race tomorrow. You never know, it might rain again.”

Vincent Abril (#4 Belgian Audi Club Team WRT Audi, Silver Cup): “This weekend is really going well for us. I had a great start, and I could have gained even more positions if I hadn’t been squeezed in turn five. Our aim was to win the Silver Cup and there is no better way to start the season, especially since we can start the main race from the fourth row now.”

Marc A. Hayek (#24 Blancpain Racing Lamborghini, Pro-Am): “Peter gave me the car in a great position and the team had a great pitstop as well. So all was looking well for a top ten result overall, but then the car suffered a small gearbox problem, when it was stuck in fifth gear. Unfortunately that meant we lost some places overall, but all in all this was a good race for us.” 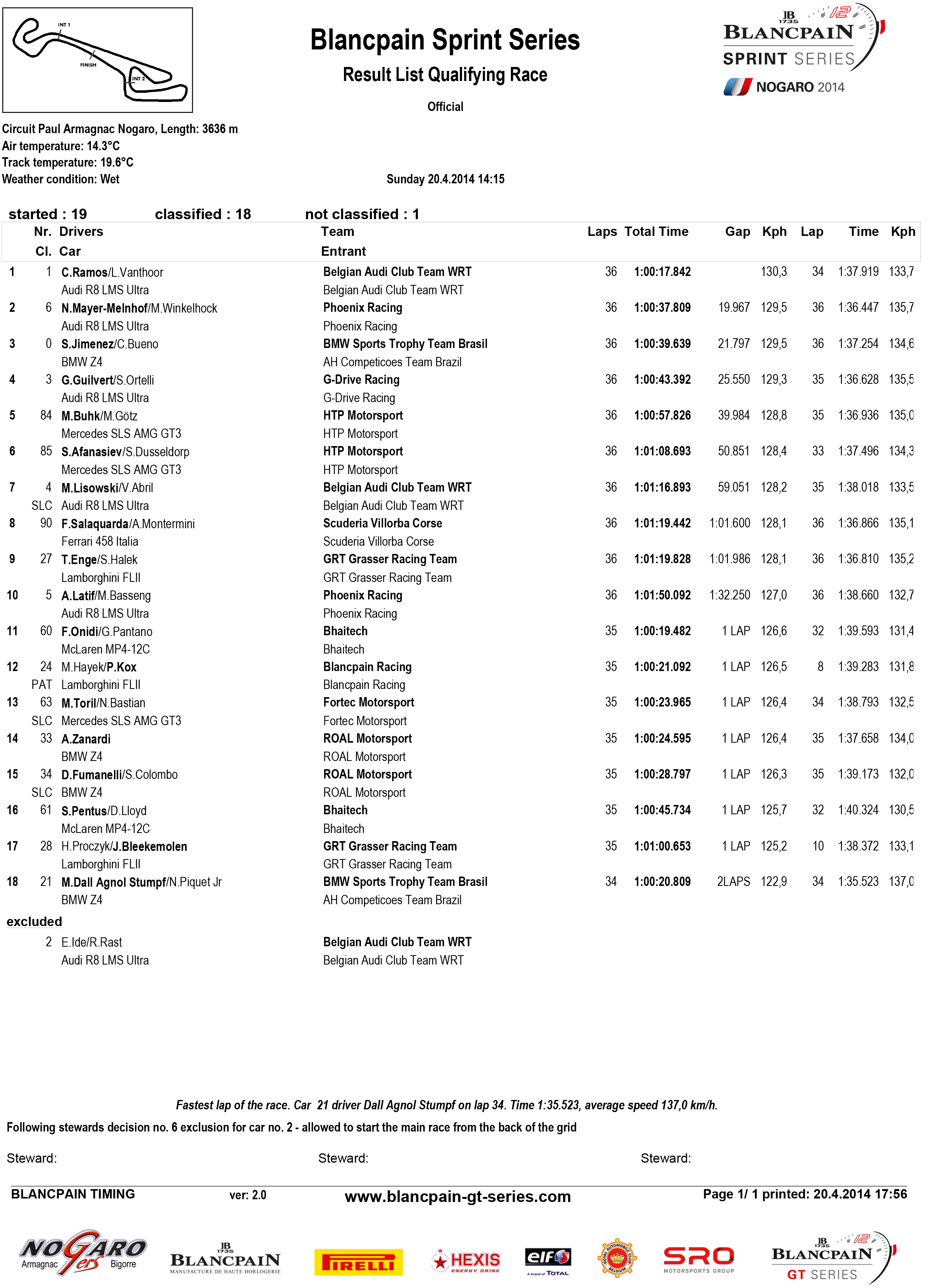 The 60-minute Main Race starts tomorrow at 14.15cet. For a full schedule of times, including details on live web streaming and live timing of the event please click here

Follow @BlancpainGT for the latest updates over the race weekend

Over 275 years of tradition in motion:
Founded in 1735 by Jehan-Jacques Blancpain, the watch brand bearing his name is the oldest in the world. Blancpain is currently engaged to the renewal of mechanical watchmaking and to passing on exceptional expertise from one generation to the next through constant investment in human resources, production facilities and research. This approach is its strength and the expression of our long-term vision, even though it goes against the tide of a certain tendency to seek immediate profit.From the creation of components through to watch design, Blancpai is distinguished by its ability to develop exceptional movements. Over the past nine years, the Manufacture has indeed developed no less than 32 new calibres.

The slick tyres used for GT racing are branded Zero: just like the slicks that have become a central feature of Formula One. The name P Zero is used in the highest categories of motorsport such as GT racing.