The historic Monza parkland will resonate to the sound of GT3 engines next weekend (20-22 April) as the Blancpain GT Series Endurance Cup roars into life for 2018.

A packed grid representing 12 different manufacturers will tackle a three-hour race at the Italian venue, where 54 cars will compete for outright and class honours. With the Endurance Cup champions beginning their title defence and several new and returning drivers set to be among the protagonists, it promises to be a thrilling weekend of racing in Italy.

The Pro class will be the most fiercely contested at Monza, with 24 high-calibre entries fighting for top honours.

Two manufacturers will be debuting new machinery in Italy. Bentley Team M-Sport are set to bring a pair of their 2018-spec Continental GT3s to the event. The reigning  Endurance Cup Teams’ Champions will have Steven Kane, Guy Smith and Jules Gounon handling the #7 and Andy Soucek, Maxime Soulet and Vincent Abril aboard the #8.

Though the Lexus RC F GT3 has already made its Blancpain GT Series debut, Monza will represent the machine’s maiden appearance in the Endurance Cup. The Japanese brand has partnered with Emil Frey Racing this season and is fielding a brace of entries throughout 2018, with Monza providing the first opportunity for the team to test the car over an extended distance.

There is a return to the top class for Aston Martin, with Swiss outfit R-Motorsport fielding a pair of V12 Vantages for an accomplished group of drivers that includes factory stars Nicki Thiim and Maxime Martin. Meanwhile Porsche’s first full-scale assault on the Endurance Cup begins at Monza, with Romain Dumas, Frederic Makowiecki and Dirk Werner sharing a Manthey Racing-run 911 GT3 R.

The best-represented brand will be Mercedes-AMG, with five of the German marque’s cars competing for Pro class honours. Strakka Racing will field two of these, with Maxi Buhk leading the #43 line-up and Christian Vietoris among the drivers aboard the #44. French squad AKKA ASP will also enter two Pro cars, one of which competes under the SMP Racing banner and sees Vitaly Petrov making his series debut. The Black Falcon crew complete the impressive Mercedes-AMG contingent in the Pro class with their #4 machine.

Lamborghini arrive at their home event on a high having won last year’s Endurance Cup and overall titles in partnership with Grasser Racing. The combination is back with a trio of their Huracan GT3 machines, led by last year’s title-winning #63 car of Mirko Bortolotti, Christian Engelhart and Andrea Caldarelli.

Fellow German manufacturer BMW will also be present in the Pro category, with two of the Bavarian marque’s M6 GT3s fielded by ROWE Racing. Total 24 Hours of Spa winners Nick Catsburg and Alexander Sims are among their chosen drivers.

There will be a single McLaren 650 S GT3 among the Pro ranks, with factory driver Come Ledogar joined by Brits Ben Barnicoat and Andrew Watson. Finally, the iconic Ferrari brand gets Pro class representation at Monza thanks to the SMP Racing squad. The Russian effort will tackle the event with an impressive trio of drivers in Mikhail Aleshin, Davide Rigon and Miguel Molina.

While there is a single Ferrari entry in the Pro ranks, the local favourite will have the biggest presence in the Pro-Am class. Five of the Italian marque’s 488 GT3s will contest the Monza event, with former Ferrari grand prix driver Giancarlo Fisichella returning to Blancpain GT Series competition aboard the 961 Corse entry.

There will be a brace of AF Corse cars on the grid, including the #51 of Duncan Cameron and Matt Griffin, while Rinaldi Racing deploy their #333 for Alexander Matschull, Rinat Salikhov and Dominik Schwäger. The Ferrari Pro-Am effort is completed by Kessel Racing, whose #11 machine will be driven by Michael Broniszewski and Alessandro Pier Guidi at Monza.

There will be four Mercedes-AMG entries on the grid in Pro-Am, with one a piece from Black Falcon, Strakka Racing, AKKA ASP, and RAM Racing. The latter entry sees Turkish racer Salih Yoluc return to the series alongside regular teammate Euan Hankey.

An exciting contest is in store for the Silver Cup category, which mixes young talents and experienced drivers. The #55 Attempto Racing Audi took overall victory last time out at Zolder and will be heavily fancied for class success in Italy. Kelvin van der Linde is joined aboard the R8 LMS by the Schothorst brothers, Steijn and Pieter.

There will be four Silver Cup entries for Lamborghini, making the Italian marque the manufacturer of choice in the Silver Cup. Ombra Racing, Daiko Lazarus Racing and Barwell Motorsport will each field a Huracan GT3, while Reiter Engineering will add a Gallardo R-EX to the mix.

Black Falcon and AKKA ASP will each field a Mercedes-AMG GT3, with the Silver Cup line-up completed by the G3 Jaguar of Emil Frey Racing. The Swiss squad will run Adrian Zaugg, Alex Fontana and Mikael Grenier at the Italian event, the first of three confirmed Blancpain GT Series outings for the G3 this season.

Stars of TV and football among Am Cup contenders

A pair of Mercedes-AMG efforts lead the line in the Am Cup category. AKKA ASP will field a car for Eric Debard, Philippe Giauque and World Cup-winning footballer Fabien Barthez, bringing the team’s total entries at the event to five across all four classes. With a further Am Cup Mercedes-AMG entry from ARC Bratislava, the German marque will be represented by no fewer than 13 cars at Monza.

There is further German machinery on show in the Am Cup thanks to Walkenhorst Motorsport, who field their BMW M6 GT3, and Herberth Motorsport with a Porsche 911 GT3 R.

Garage 59 will be present with their McLaren 650 S GT3, which will see Top Gear presenter Chris Harris among the drivers. The Am Cup grid is completed by a brace of Italian machines: Rinaldi Racing will field a Ferrari 488 GT3, while Barwell Motorsport are set to run a Lamborghini Huracan GT3.

The on-track action begins on Saturday (21 April) with free practice at 11.30 and a pre-qualifying session at 17.00. Sunday sees qualifying take place at 09.45, with the three-hour Endurance Cup race scheduled to begin at 15.00.

A trio of support categories will join the Blancpain GT Series for the Monza weekend. The Lamborghini Super Trofeo begins its 10thseason of European competition on home turf, with the popular one-make category introducing a new and improved car for 2018. The ultra-competitive Formula Renault Eurocup adds single-seater action to the mix, with the brightest young talents in racing looking to make a name for themselves at one of the sport’s most iconic venues.

Finally, the Blancpain GT Sports Club makes the first of four appearances on the Blancpain GT Series support bill at Monza. Now entering its fourth season, the category gives gentlemen drivers  the opportunity to fight for overall victories and provides the perfect stepping stone from club competition to international motorsport. 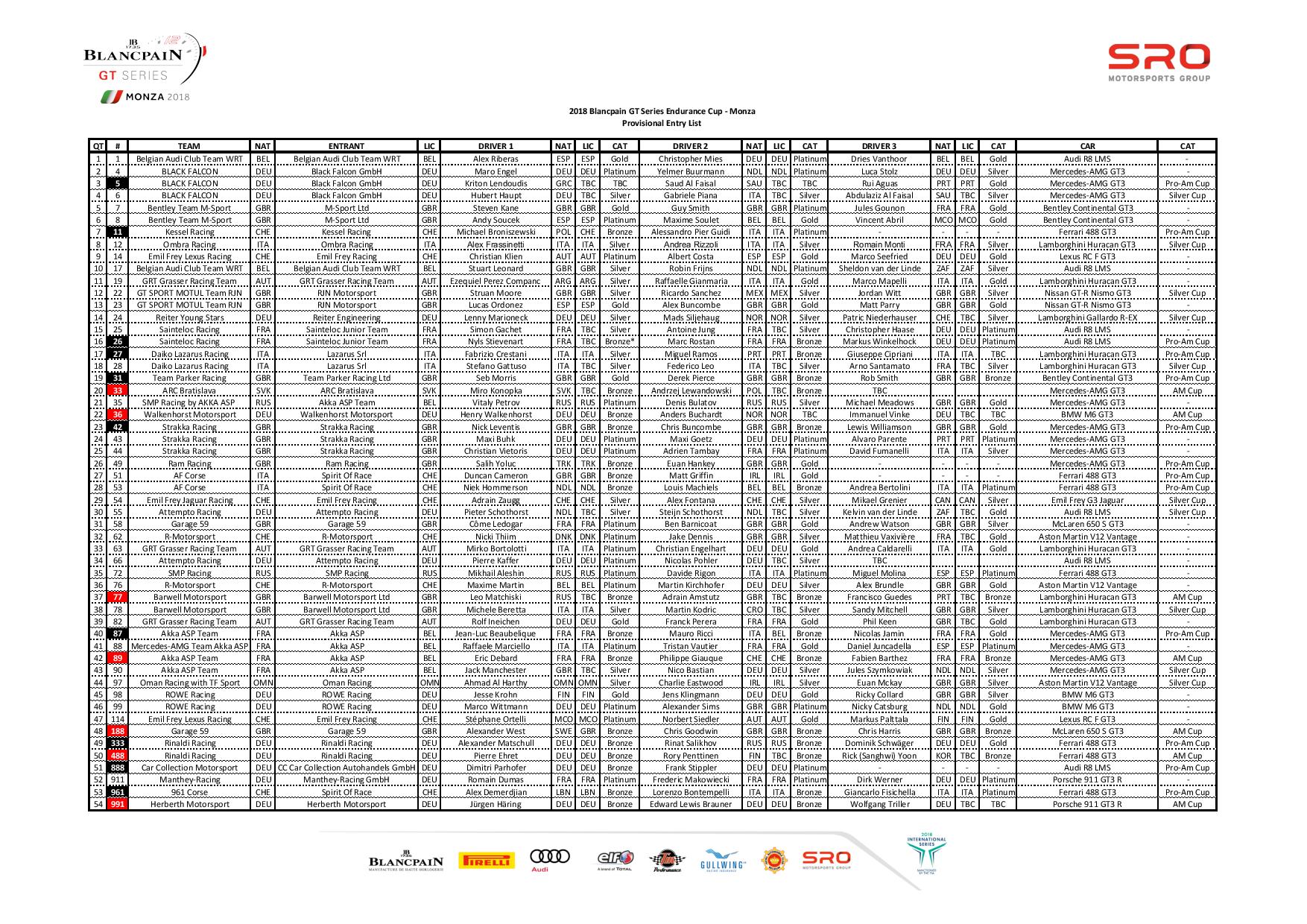