The Ferrari 296 GT3 represents the future of the Prancing Horse in GT racing, a sector that has always seen the closest relationship with customers and the greatest transfer of technology and innovative solutions to production cars. The 296 GT3 grew out of the 296 GTB, the latest evolution of the Maranello company’s two-seater mid-rear-engined sports berlinetta concept.

The Ferrari 296 GT3 is an innovative project, on and off the track, that the Prancing Horse manufacturer decided to develop to continue a winning tradition dating back to 1949 when the 166MM triumphed in the 24 Hours of Le Mans. This is a new approach in terms of design, car management at all stages of a race weekend, electronics, and even the engine architecture, a 120° turbocharged 6-cylinder. A new concept built to meet the needs of teams, professional drivers and gentlemen drivers, on whom Ferrari has always focused. This car has been meticulously designed in every detail and from every angle, in compliance with the new GT3 regulations.

The 296 GT3 marks the return to the track of a six-cylinder-engined Ferrari even though, in compliance with technical regulations, it doesn’t have the electric unit featured in the 296 GTB. A 120° vee configuration with equally-spaced firings was introduced for the 296 GT3’s V6 combustion engine. This is based on its road-going twin, as is the positioning of the turbos inside the vee. All this brings significant benefits in terms of compactness, lower centre of gravity and reduced mass, and also helps to achieve very high power levels. The engine, which has always been at the heart of Ferrari’s designs, is farther forward and lower down than in the road version, to the benefit of a lower centre of gravity and torsional rigidity, which is around 10% higher than in the 488 GT3.

Ferrari’s engineers worked with those of its partners to design and fine-tune all the engine’s internal fluid dynamics and the specific components adopted for the track version of the power unit. They aimed to provide uncompromising performance, reliability and driveability for both ‘Sprint’ and ‘Endurance’ races. For this type of competition, they did everything to limit consumption significantly without sacrificing performance, aiming for more flexible race strategies and reduced intervention times. For example, the alternator is attached to the gearbox to improve the unit's compactness and rigidity and make it easier for technicians to access.

The gearbox of the 296 GT3 is new and specially developed for this car. The designers opted for a single-disc clutch unit with six gears, arranged transversely for better aerodynamics and weight distribution. Clutch actuation is now electronic and can be controlled from the steering wheel, rather than mechanical via the foot pedal, while the gear change is electrically actuated. The miniaturisation of the components and the use of premium materials made it possible to keep the weight of the Xtrac gearbox down, benefiting performance.

Ferrari’s future in GT racing is sinuous in form, enfolding the volumes of the 296 GTB, redefining them to meet the requirements of the track and performance thanks to the teamwork between Centro Stile, aerodynamicists and designers. This is why the car’s design, minus the aerodynamic devices or features specific to the racing version, has retained its connection to the production model. The design of the latter already refers back to vehicles such as the 250 LM of 1963, a perfect combination of simplicity and functionality.

The Ferrari engineers have been able to define an aerodynamic configuration within the homologation performance window by reducing ride height sensitivities with the aim of improving handling and driveability. This precise and detailed work on the shapes yielded a gain of 20% in downforce on the car over the previous generation. From this perspective, the 296 GT3 lives in symbiosis with the air around it, exploiting it to maximise grip and handling, benefiting gentlemen drivers and professionals alike. The challenge met by the designers was to limit the car’s sensitivity to the forces generated by aerodynamics, to provide an extraordinary balance for the benefit of driveability and driver confidence. The geometry of all the components, from the body to the wing appendages, was designed in detail under varying operating conditions and in mutual aerodynamic interaction to optimise performance and make it robust in different racing contexts, also when in the slipstream of other cars. From the front splitter to the rear extractor, which has a diffusor with a sophisticated three-dimensional design, the 296 GT3 stands out through a refined design that aims to achieve the lowest possible drag. 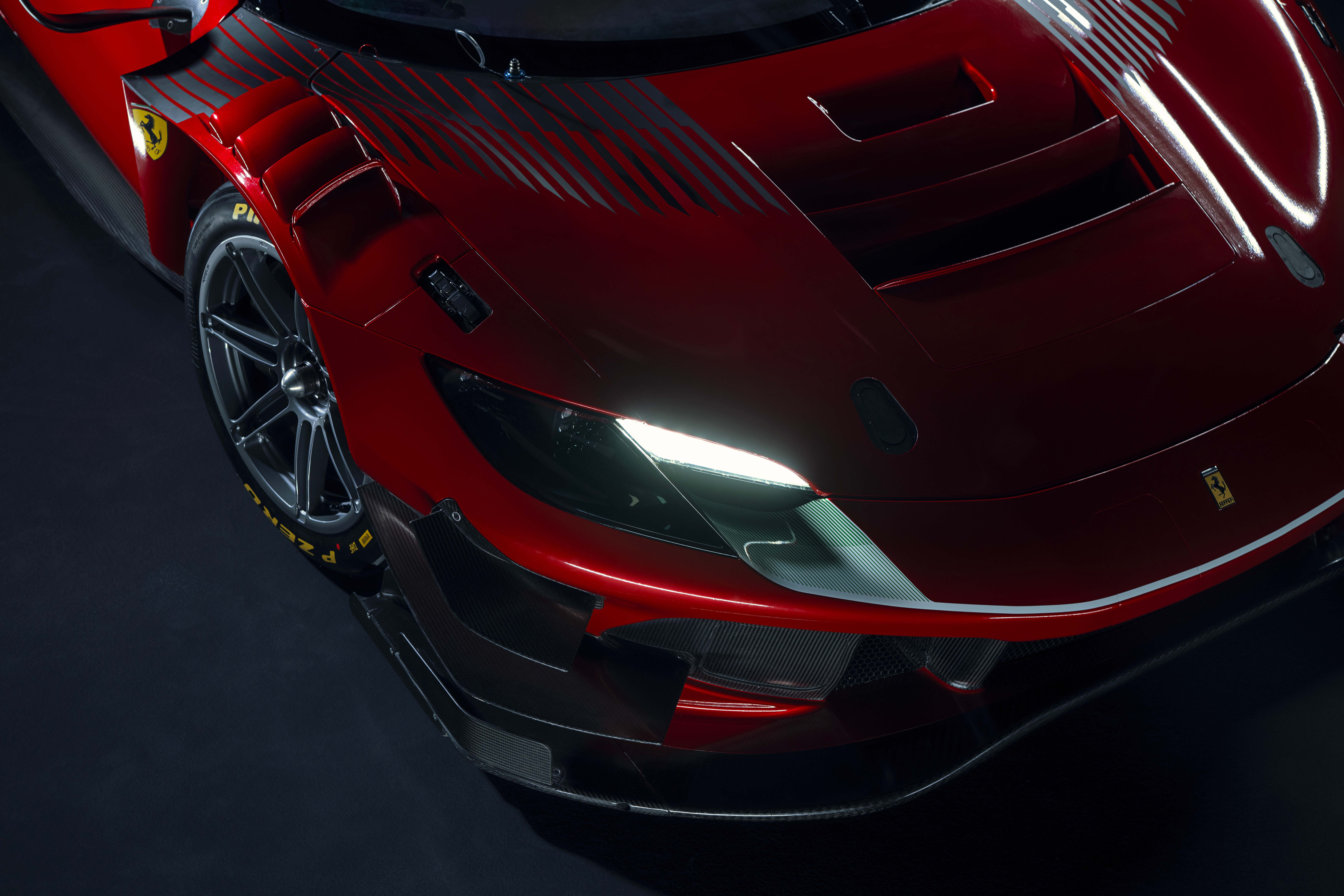 Intuitiveness, visibility and accessibility are critical to the development of the cabin design without neglecting essential aspects such as safety and comfort. In endurance racing, performance depends on these features, particularly for gentlemen drivers. The cabin was completely redesigned over the 488 GT3, in response to input from factory drivers and customers. The result is a cockpit that allows its occupant to quickly and effectively find the best driving position, with the main functions always within easy reach. Many controls and functions have moved to the new Formula 1 single seater-inspired steering wheel, while the position of the Sabelt seat provides optimal visibility, both day and night. It also adds a new level of comfort for drivers of different sizes and statures who can use the adjustable pedals and steering to find their best position in the car. The air conditioning system and airflow inside the cabin were designed to provide adequate ventilation in all conditions, helping the driver to concentrate during every stage of a race.

While the 296 GT3 chassis draws on the experience of the 488 GT3, it is entirely new and is made of aluminium. Besides being extremely easy and fun to drive, the 296 GT3 can exploit the grip potential offered by the tyres without compromising their integrity in just a few laps, benefiting performance and repeatability. The chassis’ extreme lightness, which in the 296 GT3 also allows better and more efficient ballast management, contributes to this. The safety structure has been carefully designed using the most sophisticated simulations and innovative technologies and research, especially in alloys and materials.

The 296 GT3 has a longer wheelbase than its road-going counterpart, within the regulatory limits, and a different suspension design to the 488 GT3, with dedicated kinematics and structures. The double wishbone arms in the front and rear suspensions are designed to offer maximum grip even at high speeds, limiting stress on the tyres as far as possible, to the benefit of tyre life, performance and reliability. The suspension, like the anti-roll bars, features the widest possible range of settings providing drivers with the best possible setup. The braking system was also revised and upgraded, with newly designed callipers and discs (now 400 mm at the front). Rotiform has developed an all- new, forged wheel homologated specifically for the 296 GT3. Encompassed in the partnership, the new Rotiform design will be the exclusive wheel offered for all factory Ferrari 296 GT3 professional level racecars.

In designing the 296 GT3, Ferrari’s engineers focused on speeding up track operations on the car during the race and pre-race. From this point of view, it is easier to modify the 296 GT3’s setup than the previous model due to more accessible mechanical and elastic components. Operations related to checks on the engine or major accessory systems were also significantly improved to cut intervention time on the car. However, the new Ferrari also differs significantly from its rivals in terms of replacing significant parts of the car. The front and rear portions can be switched in seconds due to a series of devices and solutions that ensure a quick return to the track after any damage affecting aerodynamics or performance. 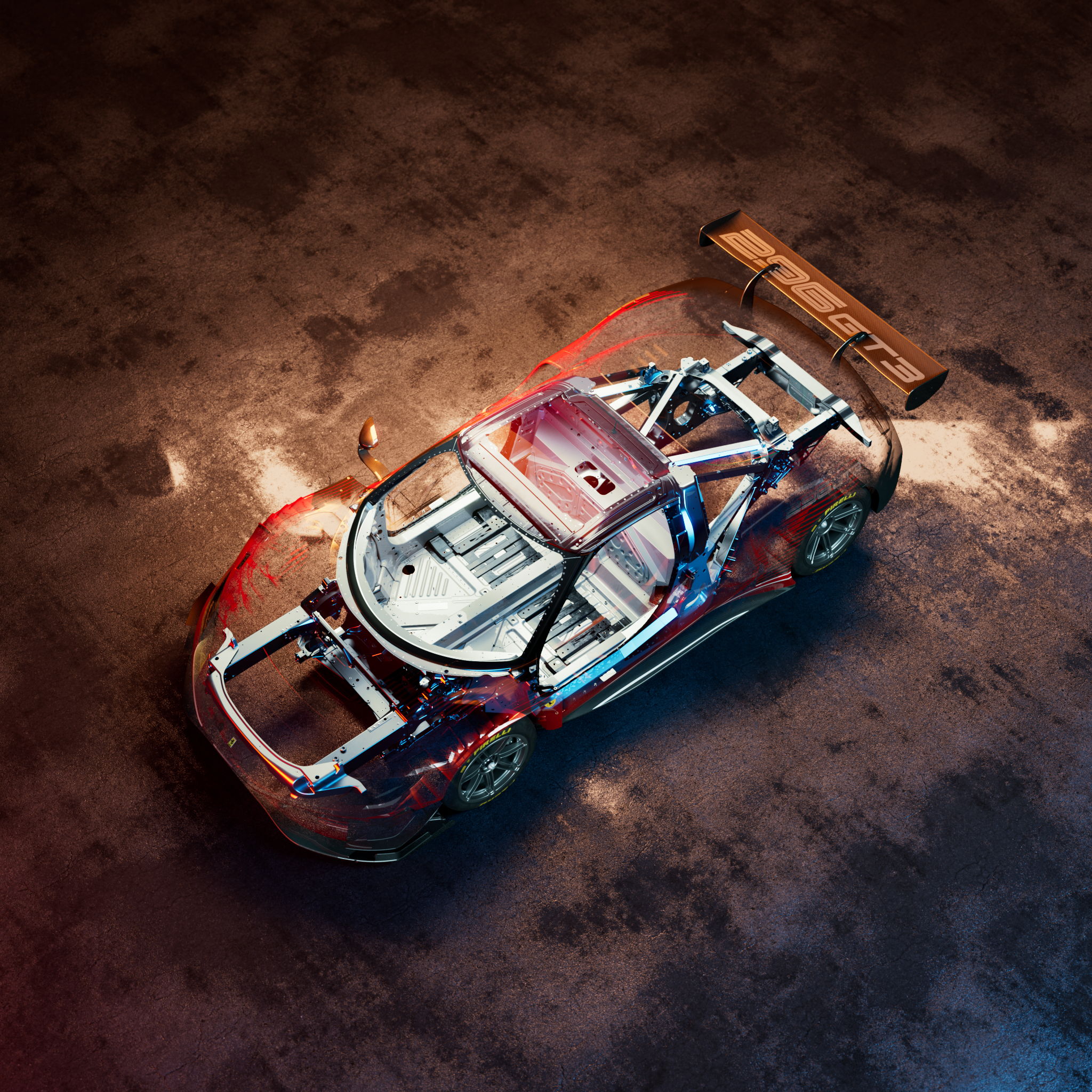 The 296 GT3 was developed with extreme use in mind, typical of the “Pro” classes where victory is the ultimate goal, and for gentlemen drivers, for whom racing is first and foremost about having fun. The entire project concept emerged in 2020 and went live with with the first CFD simulations and simulator models. Then came the indoor testing, which defined the car’s aerodynamic shape in the wind tunnel, the bench-tuning of the engine and rigidity testing the vehicle chassis. The car finally completed the endurance tests in Maranello’s 4WD Dyno. Since the first shakedown at the Fiorano track on 12 April 2022, the new Ferrari has completed tens of thousands of kilometres preparing it for racing, the toughest challenge of all.