2022’s Fanatec Esports GT Pro Series reaches its halfway mark in Belgium this afternoon when drivers take a break from their TotalEnergies 24 Hours of Spa build-up to battle for real-world points on Assetto Corsa Competizione.

The 74th running of the world’s biggest GT race is also a Fanatec GT World Challenge Europe Powered by AWS Endurance Cup round. As such, a maximum of five additional Overall and Silver teams’ championship points are up for grabs inside the Fanatec Arena.

ROWE Racing’s Neil Verhagen dominated Imola's season opener for BMW but could do nothing about Tommaso Mosca at Paul Ricard where the Silver class driver led home a Akkodis ASP and Mercedes-AMG one-two.

They’re two of 27 drivers eager to begin Round 3 on a high before thoughts turn to the twice-around-the-clock enduro that begins tomorrow afternoon.

24 outright victories make BMW the 24 Hours’ most successful manufacturer, and it added another last season – albeit over a somewhat shorter distance – when David Pittard overcame Arthur Rougier and Matt Campbell in a fabulous sim racing encounter.

But Pittard, Walkenhorst and the M6 GT3 do not feature on this year’s entry, which leaves the door open for the likes of Rougier to claim his first win of the season. The Frenchman starred in 2021 but struggled at Imola before bouncing back with a class podium last time out. Could Spa be his and Emil Frey Racing’s chance to stand on the top step once again?

His real-world Pro rival Raffaele Marciello bagged second overall and maximum Pro points at Paul Ricard, and now heads to a circuit where he’s annexed real-world pole positions for the past two years. The Italian is still searching for an overall esports win, however, and will find it tough to change that fact with the extra 30kg of success ballast carried by class as well as outright race winners.

It's for the same reason that his team-mate Mosca could struggle on Friday. Just ask Verhagen who, at Paul Ricard, was a shadow of the driver that had utterly dominated Round 1.

On the flipside Alex Aka had far less trouble managing the additional weight in France where his Attempto Audi swelled by 30kg as ‘reward’ for winning Imola’s Silver Cup class. Qualifying just 0.02s shy of pole, he remained a thorn in Mosca’s side throughout the opening stint before slipping behind Marciello. Still, second in class and third overall represents an exceptional early return for the German whose team has collected nine real-world points from a possible 10 in Fanatec Esports GT Pro Series this year.

Juuso Puhakka has also marked himself out as the Pro to watch after collecting a third and then second place finish in the first two rounds. The arc of improvement suggests victory might also be on the cards for Attempto’s other Audi later today when Ricardo Feller takes the reins.

That will likely depend on Nicki Thiim whose fourth place last time out allows him to race success ballast-free. The Dane has already banked six real-world points for Beechdean AMR this year on Assetto Corsa Competizione – one fewer than only Puhakka – and finished third overall in the TotalEnergies 24 Hours of Spa 12 months ago.

Each of the 27 entries have been assigned a Fanatec rig for the entire season, which they can either set up using data provided by official SRO Esports partner, Coach Dave Academy, or according to their own preferences. They must also use the same manufacturer as their team has entered in real life. 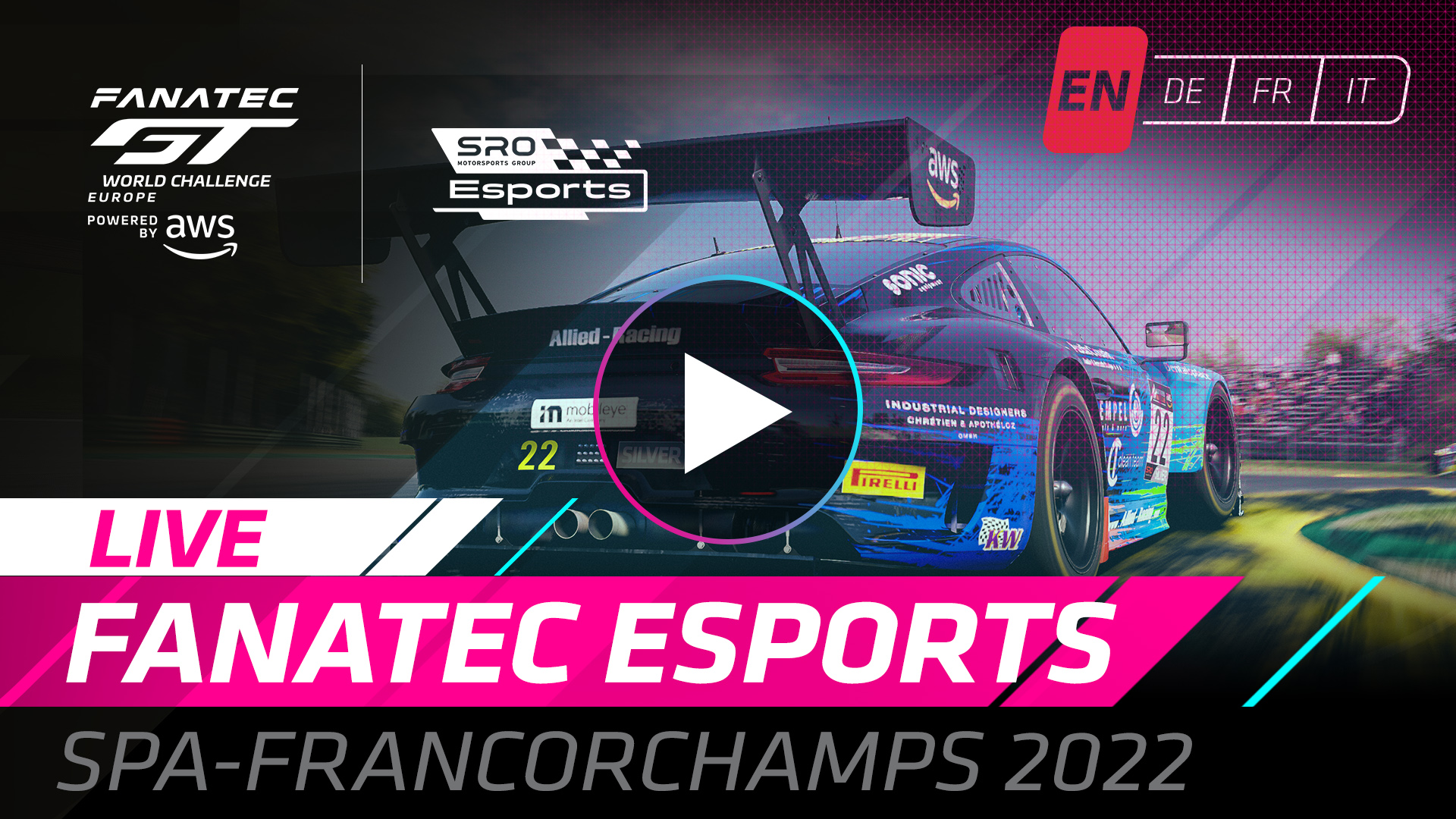