The penultimate stop on the Fanatec Sprint tour took the championship to the Adriatic coast for what will very likely prove to be the hottest event of the season.

Despite the soaring temperatures, there was rarely cause for Dries Vanthoor and Charles Weerts to break sweat. The Team WRT Audi duo must wish the series raced at Misano every weekend after securing both wins for the second year in succession. Nevertheless, a strong showing from Akkodis ASP has kept the Mercedes-AMG squad in the title hunt ahead of the season finale at Valencia.

The Silver Cup crown will not be up for grabs at the Spanish venue after AF Corse Ferrari duo Ulysse De Pauw and Pierre-Alexandre Jean wrapped up the championship with a round to spare. Pro-Am does go to the wire, but a stellar weekend for McLaren outfit Garage 59 has put Miguel Ramos and Dean MacDonald within sight of glory.

The Valentino Rossi effect was in full force at Misano. A record attendance of 18,000 spectators turned The Doctor's home track yellow and watched their hero score his best Fanatec Sprint result yet on Sunday afternoon. That was just one of the stories to emerge from a red-hot weekend on the Adriatic.

Vanthoor and Weerts took top spot in both races to maintain their incredible form at Misano. The pair now have seven wins from nine starts together at the Italian track, including clean sweeps in 2021 and 2022.

Sunday was Vanthoor's 14th series win, drawing him level with elder brother Laurens as the most successful driver in Fanatec Sprint history. Both took all of their victories for the Team WRT Audi squad.

Both races at Misano were won from pole position. Weerts scored his fifth Fanatec Sprint pole on Saturday morning, briefly drawing level with teammate Vanthoor's total. The latter hit back on Sunday, topping qualifying for the first time since the series visited the Nürburgring in 2019.

This was very much a weekend for the Audi runners. The German marque made up six of the top-seven finishers in race 1 and four of the top-five on Sunday. The only exception on both occasions was the #89 Akkodis ASP Mercedes-AMG of Raffaele Marciello and Timur Boguslavskiy, which finished as runner-up in both races.

Though they have slipped 11.5 points back in the title battle, this could be seen as a very good weekend for the #89 crew given the Audi runners' superiority at Misano. Marciello/Boguslavskiy minimised the points loss to Vanthoor/Weerts and are very much in the title hunt ahead of the Valencia finale.

The #30 Audi of Thomas Neubauer and Benji Goethe completed a brilliant Saturday for Team WRT by sealing the final spot on the overall podium, earning Silver Cup honours in the process. Goethe matched his career-best finish, which came at the same event last year, while Neubauer finished among the top-three for the first time since his sensational debut win at Brands Hatch in 2019.

The #11 Tresor by Car Collection Audi captured the final spot on the podium in race 2 after a last-lap pass by Simon Gachet on Jean-Baptise Simmenauer (#33 Team WRT Audi). This was the #11 crew's third podium of 2022 and gives them a shot at finishing P3 in the overall Fanatec Sprint standings.

Valentino Rossi scored his best Fanatec Sprint result and matched his highest finish in the Endurance Cup by taking fifth in race 2. Fred Vervisch had made great progress in the #46 Team WRT Audi before Rossi withstood pressure for Mercedes-AMG factory driver Jules Gounon until the chequered flag.

Imperiale Racing made a solid Fanatec Sprint debut by finishing seventh in race 2. The #663 Lamborghini would likely have been towards the front in the opening contest, but Alberto Di Folco qualified at the back due to multiple track limits violations. Albert Costa started the second race 13th but quickly progressed to sixth and spent much of his stint fighting Fred Vervisch.

The #88 Akkodis ASP Mercedes-AMG qualified fourth for race 1 but was sent to the back of the grid after fielding the wrong driver in the session. Jim Pla was at the wheel, but Jules Gounon was the nominated participant. This mix-up was caused by an administrative error prior to the weekend.

The #111 JP Motorsport McLaren starred in Saturday's qualifying, with Vince Abril taking second on the grid. The Monegasque ran P2 throughout the opening stint, only for the car to lose significant time in the pits. Dennis Lind recovered to cross the line in seventh, but a post-race penalty for an unsafe release dropped the Polish squad out of the points.

AF Corse duo Ulysse De Pauw and Pierre-Alexandre Jean were celebrating on Sunday night after clinching the Silver Cup title with a round to spare. They did so with a final-lap pass for the class win in race 2, though finishing second would also have put them beyond the reach of their competitors. 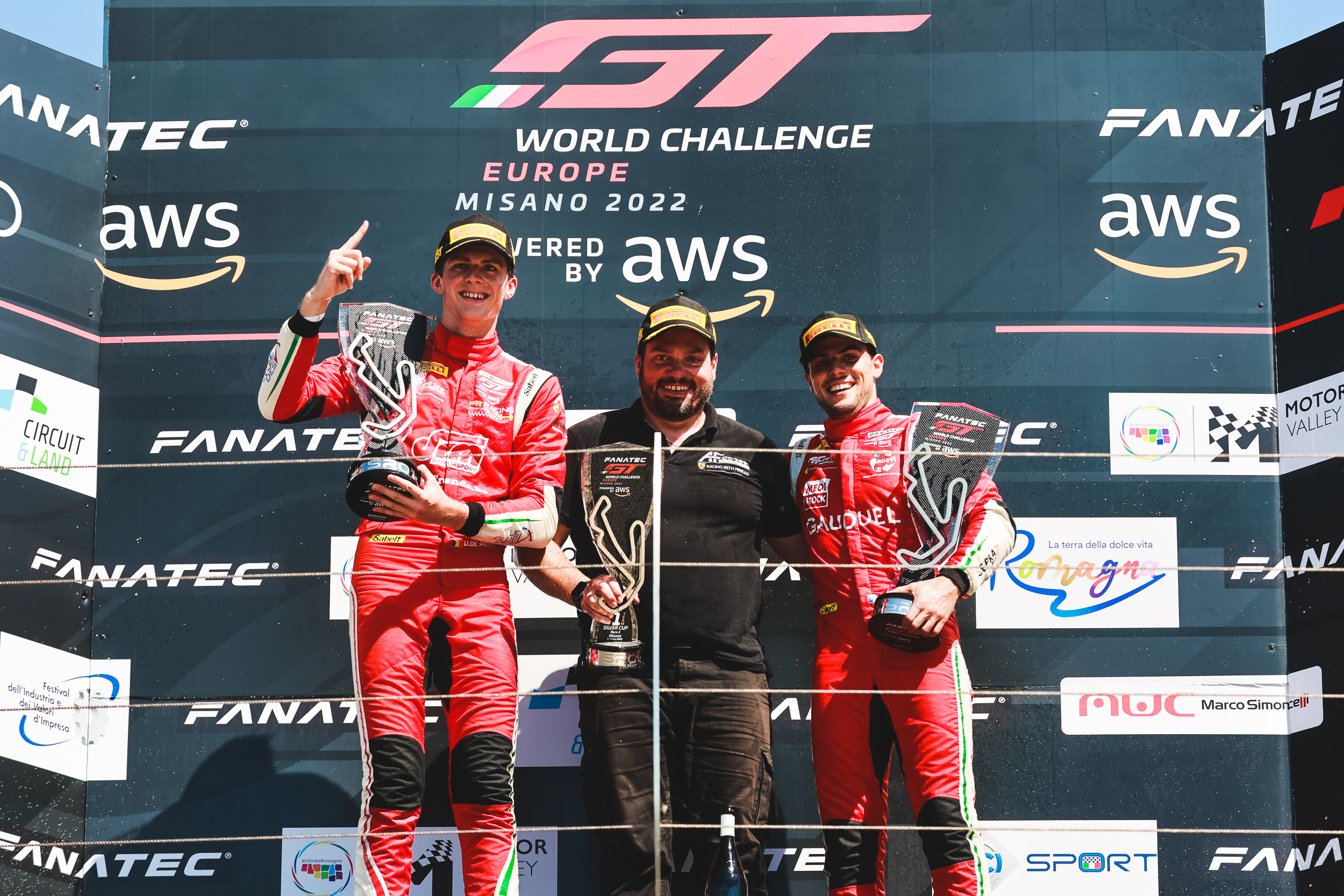 The #53 Ferrari has looked a cert for the title since taking a sensational overall win at the season-opening Brands Hatch event. They have thus far amassed a total of five wins and finished on the class podium in the other three races. They also lead the combined Silver standings despite not competing in Fanatec Endurance.

Team WRT's combination of Neubauer/Goethe took race 1. This was their first victory of the season in Fanatec Sprint, though they secured an Endurance Cup win at Imola alongside Jean-Baptiste Simmenauer. By finishing third in race 2 they completed their best weekend of the season, though the disappointment at losing the lead so late showed clearly on the drivers' faces.

The Misano weekend could not have gone any better for Pro-Am squad Garage 59. Miguel Ramos and Dean MacDonald banked maximum points, while both of their chief championship rivals failed to score at all. This gives the #188 McLaren crew a 20.5-point advantage and a golden opportunity to wrap up their class title at Valencia.

Having entered the weekend as Pro-Am leader, Cédric Sbirrazzuoli did not contest a racing lap at Misano. His #21 AF Corse Ferrari was eliminated from the opening contest in unfortunate circumstances, with Hugo Delacour unable to avoid heavy contact with the stricken #25 Saintéloc Junior Team Audi. Both cars took no further part in the event.

The #111 JP Motorsport McLaren also endured a torrid weekend. Patryk Krupinski was eliminated from the opening race after clashing with the #18 Lamborghini, while Norbert Siedler was tipped into a spin on the opening lap of Sunday's contest and took no further part.

The #52 Ferrari finished both races in runner-up spot, helping Louis Machiels and Andrea Bertolini to jump to second in the Pro-Am standings. The Ferrari pair are now on a roll of four successive second-place finishes but are yet to score their first win of 2022.

Two drivers pulled double duty at Misano with Jim Pla and Simon Gachet both tackling the third round of the GT4 European Series for Akkodis ASP. Pla enjoyed an especially strong weekend, winning the first race and taking runner-up in the second at the wheel of the #87 Mercedes-AMG to build a comfortable Pro-Am championship advantage.

Misano represented the second of two events this season at which Fanatec GT World Challenge Europe Powered by AWS was joined by both the Fanatec GT2 European Series and GT4 European Series. All three also came together at the season-opening trip to Imola.

With a field of 27 cars taking the start of race 1, Misano attracted the biggest Fanatec Sprint grid of the season. Both additions ran Lamborghini machinery: Imperiale Racing made its first start since Imola in 2020, while LP Racing contested its maiden Fanatec GT World Challenge Europe Powered by AWS event.

LP Racing also competes in the Fanatec GT2 European Series and was present at Misano with four cars, including the #88 Audi driven by team owner Luca Pirri and SRO Motorsports Group founder and CEO Stéphane Ratel.

There were also several driver changes for the Misano weekend: Lorenzo Patrese received a late call-up to replace Luca Ghiotto in the #12 Audi; Daan Pijl joined fellow countryman Danny Kroes in the #18 Lamborghini; Hugo Delacour returned to the #21 Ferrari; Lucas Légeret subbed for Gilles Magnus in the #26 Audi; and Norbert Siedler deputised for Christian Klien in the #111 McLaren.

Jonathan Cecotto, Mattia Di Giusto and Daan Pijl all made their Fanatec GT World Challenge Europe Powered by AWS debuts at Misano. Patrese and Légeret both made their first Fanatec Sprint starts having previously run at Endurance events.

With the Misano weekend complete, the home stretch towards the 2022 TotalEnergies 24 Hours of Spa now lies ahead. Track action in the Ardennes begins with the traditional Bronze Test on Tuesday 26 July and is followed by a packed week of activity on and off the track. It culminates on Saturday 30 July, with the main event getting underway at 16:45 CEST.