One week after the sunny and successful British round of the Blancpain Sprint Series at Brands Hatch the Circuit of Silverstone hosts the second race of the 2014 Blancpain Endurance Series. The already impressive entry list of the opening round at Monza has increased to 45 GT3 cars, proving that the Blancpain GT Series is still the best supported and most competitive GT competition in the world.

The opening round of the 2014 Blancpain Endurance Series proved to be a success. In the three categories the battle for the win raged on during the whole three hours of racing at the Italian temple of speed, with emotional wins for ART Grand Prix McLaren (Pro Cup), ROAL Motorsport BMW (Pro-Am Cup) and GT Corse by Rinaldi Ferrari (Gentlemen Trophy). But during the six weeks since the Italian season opener, the competitors have worked hard to try and improve their cars. Whether they have done enough will be shown at the three hour race at the Silverstone Grand Prix Circuit.

Pro Cup – Will Bentley be victorious on home soil?

In the Pro Cup the French team of ART Grand Prix will give its all to repeat its magnificent performance at Monza. With two cars on the rostrum they could have hardly done better and the McLaren MP4-12C should again be among the frontrunners in Silverstone. But on home soil, both M-Sport Bentley Continental will be supported by thousands of fans, which could lead to impressive performances by the Series newcomers. Before suffering from fading brakes, one of the Continental GT3 was running in second in Monza. The Aston Martin Vantage GT3 of Oman Racing Team – already a winner in the British GT championship this year – and that entered by Leonard Motorsport AMR will be the other crowd favourites in the Pro Cup. Both teams will do their utmost to emulate the win of Aston Martin in last year’s Blancpain Endurance Series’ race at Silverstone.

Pro-Am Cup – The Brits are coming

Winning in front of their home crowd was one of the highlights in the careers of ROAL Motorsport drivers Stefano Comandini, Eugenio Amos and Stefano Colombo. Thanks to a regular and consistent pace they took a well-deserved win. In Silverstone Michela Cerruti – unable to race in Monza due to professional obligations – will join Comandini and Amos in their quest for a repeat performance, but it will not be easy. Especially since three strong contenders have been added to the Pro-Am Cup entry list. British GT regulars Generation Bentley will enter its impressive Continental GT3 for its driver trio James Appleby, Steve Tandy and Jody Fannin. Two more British teams will join the 23 cars in the Pro-Am field: Beechdean AMR – like Leonard Motorsport AMR a partner team of Aston Martin Racing – and Triple 888 Racing, which brings the total number of BMW Z4 GT3 in the Pro-Am Cup to five. They will not be the only British teams vying for top honours as Blancpain Endurance Series regulars Nissan GT Academy Team RJN, MP Motorsport AMR and Ecurie Ecosse will certainly do the same.

Gentlemen Trophy – And then there were nine

In the Gentlemen Trophy the Audi and Ferrari teams no longer have the playground solely to themselves. British GT regular Horse Power Racing Aston Martin, entering a Vantage GT3 for Paul Bailey and Andy Schulz, will certainly be aiming to break the Prancing Horse’s hegemony in the category.

Alvaro Parente (#98 ART Grand Prix McLaren): “Silverstone means quite a lot to us, as it’s a home race for McLaren. It's great to see that a lot of the people working at McLaren GT will come to the race, so it's very important that we have a good weekend. It would be nice to show that the work everyone has been doing is culminating in good performances on track. McLaren, ART Grand Prix, my team-mates and I will do the very best so we can all have a great weekend and keep up the performances we've had since the beginning of the year. I am really looking forward to the weekend and hopefully we can achieve another great result.”

Duncan Tappy (#8 M-Sport Bentley): “We're definitely looking to improve on our 7th place finish from Monza. The team has worked incredibly hard on every detail of our race operation to give us the best chance of success, and I can't wait to take the car racing in our home country. We're expecting a good crowd, and particularly a large turnout from the Bentley factory in Crewe. It's a real honour to be one of the drivers bringing Bentley back to racing in the UK again.”

Stefano Comandini (#43 ROAL Motorsport BMW): “Racing in Silverstone is always very exciting. I competed here for the first time 14 years ago, in the V6 Renault Clio Trophy, when the track lay-out was a little bit different. Last year we suffered some problems with the car and only finished eighth, but I am convinced that this year will be another story. We have improved a lot, but we were surprised to be able to take the win in Monza. It’s not really a track where our BMW performs at its best.  We all believe that Silverstone is more suitable for our car than Monza, so we are aiming for a great performance, to keep the lead of the Pro-Am Cup.” 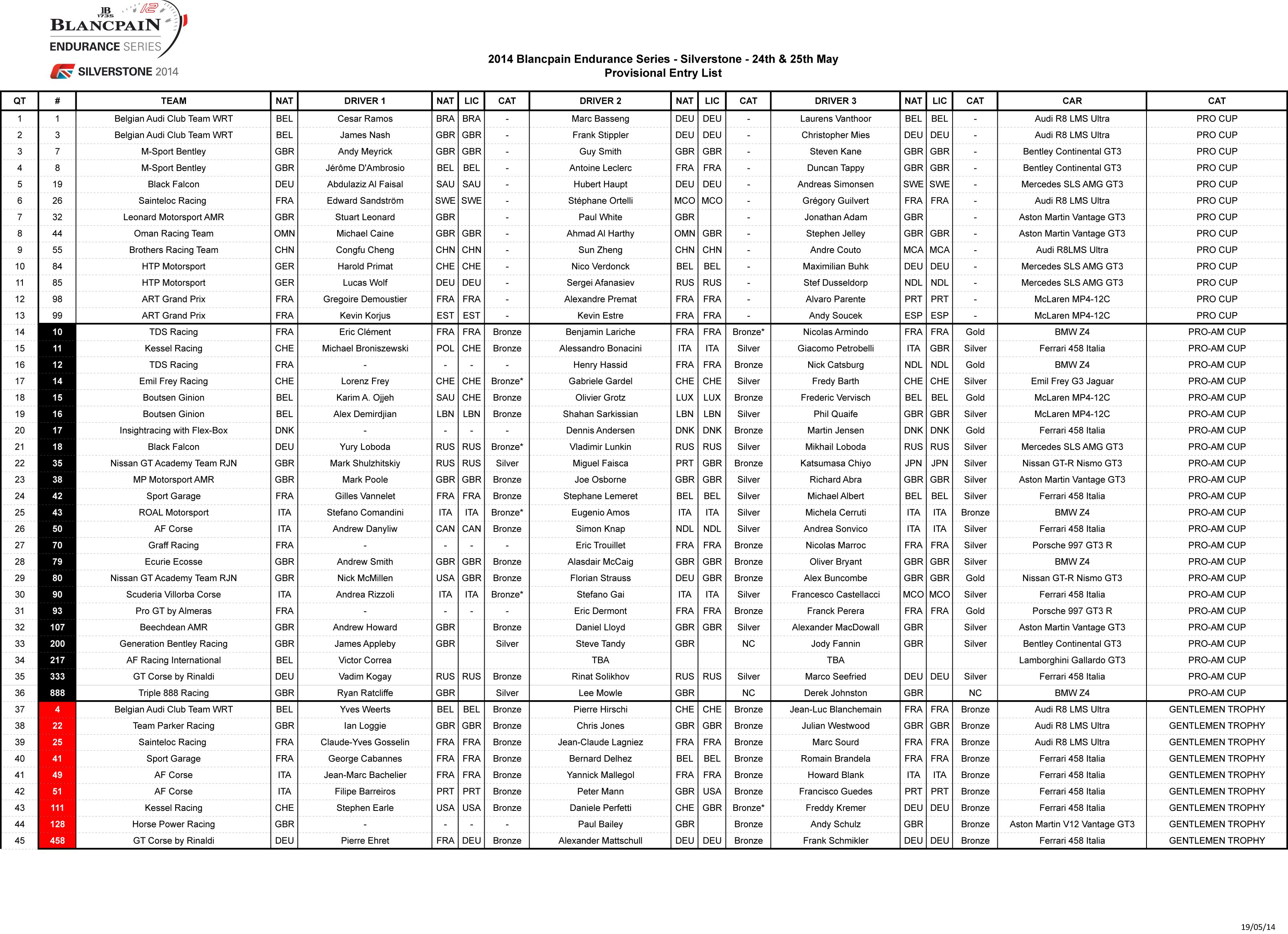