The squad's full-season driver Alessandro Pier Guidi was crowned drivers' champion after taking top spot alongside Tom Blomqvist and Côme Ledogar, both of whom were making their maiden appearances with the Italian outfit this weekend, while AF Corse/SMP Racing triumphed in the teams' classification.

The battle for the overall Endurance Cup drivers' title looked very different before the weekend got underway, with crews representing Dinamic Motorsport (Porsche) and AKKA ASP (Mercedes-AMG) level at the top of the standings.

Qualifying told another story as SMP Racing and AF Corse locked out the front row of the grid for Ferrari. It was the #51 AF Corse machine that got the jump at the start in the hands of Blomqvist, putting co-driver Pier Guidi in position to capture the title.

But the Ferrari challenge appeared to have faded during the opening hour as the #163 Emil Frey Lamborghini charged to the front in the hands of Giacomo Altoè. Both the AF Corse and SMP machines slipped back further as the #12 GPX Racing Porsche moved to the head of the field during the second hour, handing the Dubai-based squad the upper hand in the title battle.

As the race progressed it looked increasingly likely that GPX would be celebrating as the Porsche pulled out a gap of more than 14 seconds at the head of the field, while the AF Corse Ferrari fell to the lower half of the top-10. The #51 machine would need to return to the lead to capture the title, a scenario that looked unlikely at this stage of the race.

But their challenge was by no means over. Ledogar took the controls at the two-hour mark and began to make progress towards the front, climbing to third spot by half-distance and then cutting the gap to the second-place #63 Orange1 FFF Racing Lamborghini.

The #51 Ferrari moved into P2 during the fourth round of stops, releasing Pier Guidi to chase down Mathieu Jaminet in the leading GPX Porsche. The experienced Italian applied significant pressure, cutting a lead that had been as much as 12 seconds down to seven. The race had come alive, but the final twist was still to come.

The GPX Porsche stopped for the final time with 45 minutes left on the clock, while the AF Corse Ferrari ran longer. Indeed, the Italian squad was one of the very last to make its deciding stop and, crucially, changed only two tyres on the #51 machine.

It was enough to give Pier Guidi the narrowest of leads over Jaminet, but the decision was a gamble, with the Ferrari needing to hold off a Porsche running with a full complement of fresh Pirelli tyres. In a championship contested over 39 hours, the outcome went down to the final stint of the deciding race.

Jaminet had one clear shot at the lead with 30 minutes on the clock but could not get fully alongside the Ferrari and lost crucial time. Thereafter Pier Guidi was able to maintain a small gap all the way chequered flag, ultimately winning the race by just 1.6 seconds. Having looked to be out of the fight at one-third distance, Ferrari could now celebrate its maiden overall title.

The podium was completed by last year's Endurance Cup champion, with the #63 Orange1 FFF Racing Lamborghini taking third to end the season on a high. A pair of Belgian Audi Club Team WRT cars completed the top-five as the #32 machine came home ahead of the #31.

This was to prove significant as the Belgian squad clinched the combined GT World Challenge Europe Powered by AWS teams' championship for the first time since 2015, beating rival outfit AKKA ASP after the #88 Mercedes-AMG suffered damage and slipped out of the points.

A back-and-forth battle for Pro-Am victory would decide the outcome of the Endurance Cup title at Circuit Paul Ricard. The #93 Sky Tempesta Racing Ferrari secured pole, ensuring a one-point advantage ahead of the race. Chris Froggatt slipped back at the start, allowing Chris Goodwin to take both the lead and the championship advantage in the #188 Garage 59 Aston Martin.

Froggatt fought back and had re-passed the Aston by the conclusion of the opening stint. He remained there after the first round of stops, but at this stage Barwell Motorsport entered the frame as Sandy Mitchell charged into the lead at the wheel of the #77 Lamborghini.

The #93 Ferrari slipped back and did not feature in the lead battle thereafter, leaving the Garage 59 and Barwell cars to fight over the title. The next change came at the three-hour mark when Marvin Kirchhöfer took the wheel of the #188 Aston Martin and moved into top spot, showing excellent pace in slippery conditions.

With two hours left on the clock Mitchell was back in the Barwell Lamborghini and had soon closed down Alexander West to swap positions once more. When the final round of pit stops arrived Barwell held the advantage, but there was still another change to come. Leo Machitski would handle the concluding stint in the #77 Lamborghini, while Kirchhöfer returned to the #188 Aston Martin. The German driver quickly cut the advantage and made the race-winning pass with 30 minutes left on the clock.

West and Goodwin were therefore crowned Endurance Cup Pro-Am champions for the first time, while the addition of Kirchhöfer, who was making his first appearance for the squad this season, proved to be inspired. The Barwell crew of Machitski, Mitchell and Rob Collard secured second on-track and third in the standings, while Sky Tempesta took the reverse result. The Ferrari squad had already sealed the GT World Challenge Europe Powered by AWS Pro-Am teams' and drivers' titles at the Total 24 Hours of Spa.

In contrast, the Silver Cup produced a relatively straightforward contest as Barwell secured the race win and title honours in the Endurance Cup. The #78 Lamborghini crew entered the finale with a 17-point advantage and completed the job in style by adding a second victory of 2020.

The #15 Tech1 Racing Lexus was out front early on but was pegged back by a drive-through penalty for contact with the #14 Emil Frey Racing Lamborghini. This promoted the #78 Barwell machine into the class lead that it only surrendered during pit stop cycles. Patrick Kujala, Alex MacDowall and Frederik Schandorff were more than a minute clear at the finish, settling the drivers' title and adding the teams' championship for Barwell.

The #15 Lexus recovered to take second in class, capturing its best Endurance Cup result to date, while the #5 HRT Mercedes-AMG completed the podium and secured runner-up spot in the Endurance standings. Further back, the #90 Madpanda Motorsport Mercedes-AMG finished seventh among the Silver runners to seal the GT World Challenge Europe Powered by AWS Silver Cup title for teams' and full-season driver Ezequiel Perez Companc.

In the Am Cup, CMR won its battle with fellow French outfit Sainteloc Racing. The Bentley squad prevailed thanks to Philippe Chatelet, Nicolas Misslin and Stéphane Tribaudini, the latter having already collected the Endurance Cup title at the Total 24 Hours of Spa.

As such the Circuit Paul Ricard contest saw all four Endurance titles going to the race-winning crews. It also featured just one brief safety car intervention during six hours of ultra-competitive action, ensuring that more laps were completed at this year's contest than any previous Endurance Cup event at the track.

The race wrapped up the 2020 GT World Challenge Europe Powered by AWS season, bringing the curtain down on a campaign that posed many challenges but ultimately delivered a fitting sporting spectacle. In what was the Endurance Cup's 50th event, this was a contest that more than matched the occasion. 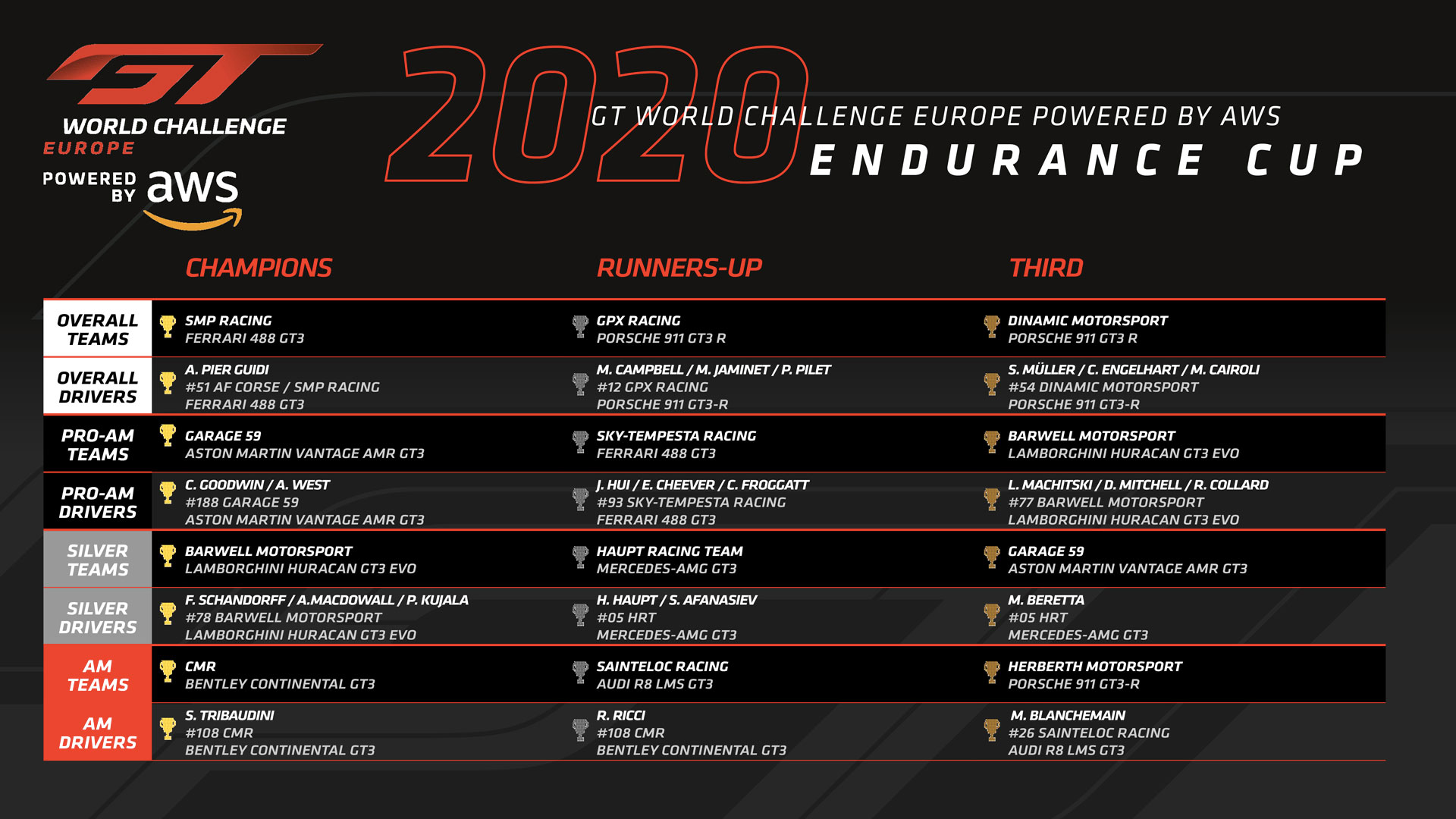 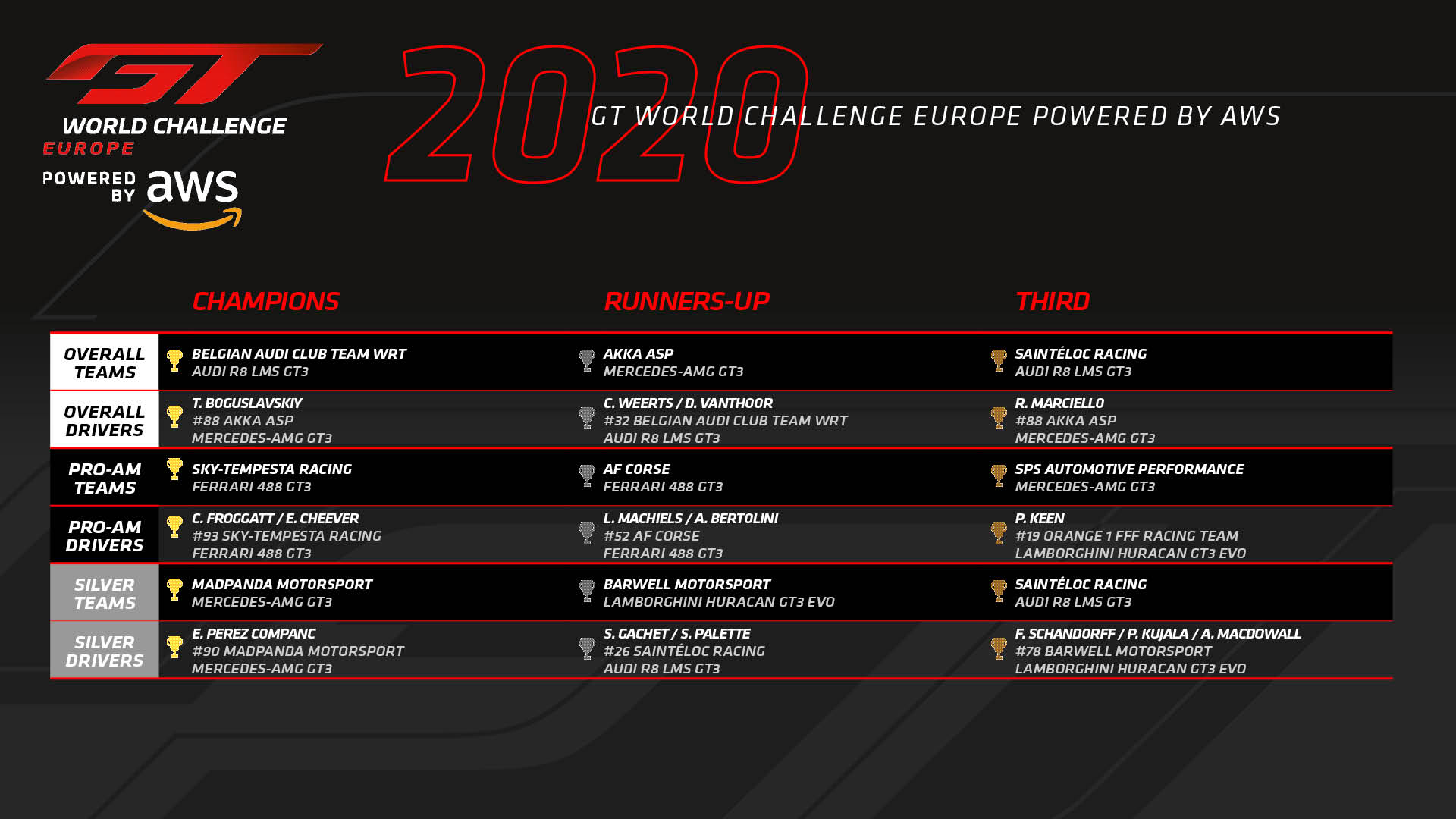