By adding BT Sport in the UK, RAI Sport in Italy and terrestrial network Rede Bandeirantes in Brazil, while expanding coverage on Eurosport and renewing a successful partnership with RTL in Germany, in addition to an already impressive distribution on all five continents, SRO Motorsports Group is pleased to announce the strongest TV broadcast by any GT series worldwide.

Both the Blancpain Sprint Series and Blancpain Endurance Series will be covered worldwide, in a fast moving mix of live broadcasts and highlight reports. The total TV audience will be in excess of 1.4 million viewers around the world. Several tens of thousands web viewers increase that impressive figure during every Blancpain GT Series event.

* Bloomberg: highlights across Europe, the Middle East and Asia

Other live pan-European coverage will come from Motors TV, which will bring live coverage of all Blancpain Endurance Series races, starting with Monza next weekend. An extensive build-up to the race completes their coverage, with highlights of the races programmed in the week following the race weekend.

In the UK BT Sport is SRO Motorsports Group new partner for the coverage of the Blancpain GT Series. The newcomer in the British television world will add live reports of the Blancpain Sprint Series to its already comprehensive sports coverage, and also show highlights of all Blancpain Endurance Series events.

In Germany the agreement with RTL, the leading entertainment network in Europe, has been renewed. This guarantees millions of viewers for the highlights broadcast prior to the live Formula One qualifying programmes on Germany’s leading terrestrial channel. The RTL programmes also enjoy a big audience in Switzerland and Luxemburg.

The Italian viewers will be served by RAI Sport, who will bring highlights of both the Blancpain Endurance Series and Blancpain Sprint Series. The same goes for the Belgian RTBF, which – being a partner of the event – adds extensive live coverage of the Total 24 Hours of Spa to the mix.

Worldwide, there will be broadcasts in all European and African countries, across the whole of the Middle East, in the USA, Brazil and Mexico and reaching out to Australia, Thailand, Malaysia and Indonesia. Panregional coverage will be strong with Bloomberg continuing its extensive coverage, and widely distributed motorsport programmes such as Mobil 1The Grid will feature races from both series.

Also available for each race is a huge news distribution that offers short news items from the series that are made accessible on three satellites worldwide, through the Eurovision WorldFeed services. The news content is kept available for one month on different formats (screen/web/broadcast) through the Worldlink Eurovision service. Both services reach 1000 TV stations worldwide and all TV news agencies.

And last but not least, there is the live coverage on the official Blancpain GT Series website, www.blancpain-gt-series.com, coverage which is embedded in several other global motorsports websites. 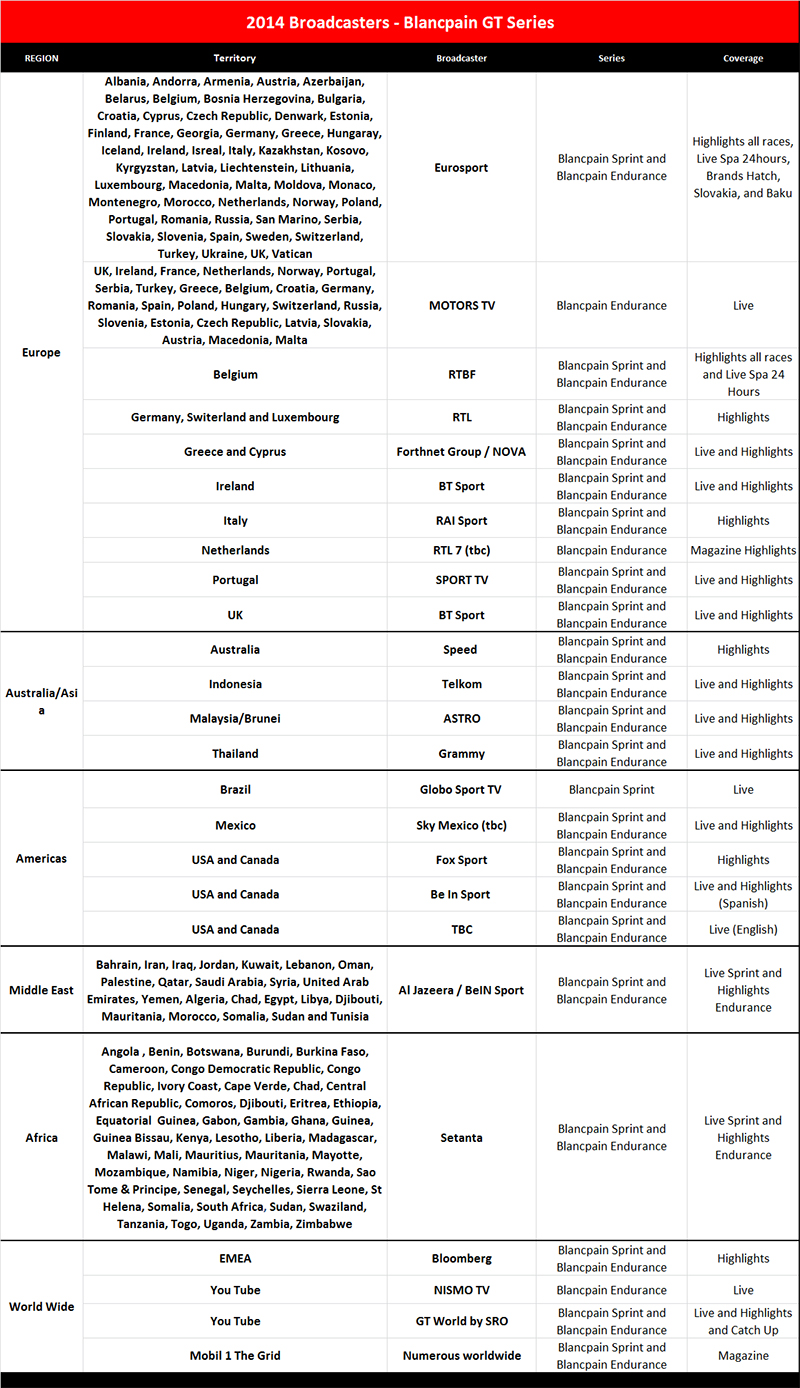