The 60-minute contest was won by the #88 AKKA ASP Mercedes-AMG of Raffaele Marciello and Timur Boguslavskiy, the latter entering the race as the only remaining rival to the WRT duo. Weerts and Vanthoor knew that a spot on the podium would guarantee them the title and did exactly what was required, finishing a comfortable second to the AKKA ASP car.

It means that, at 19 years of age, Weerts becomes the youngest overall champion in GT World Challenge Europe Powered by AWS history. Vanthoor emulates brother Laurens, who won the Sprint Cup's forerunner, the FIA GT Series, with the same squad in 2013. For Belgian Audi Club Team WRT, the 2020 title represents a seventh in eight seasons.

The final Sprint Cup race of a rapid-fire 2020 campaign began in dramatic fashion when contact in the pack sent the #93 Sky Tempesta Racing Ferrari into the outside wall on the dash to turn one. Eddie Cheever III suffered a heavy impact, but was able to walk away from his stricken car unaided.

Once racing resumed Marciello was peerless, pulling away from the competition by several tenths each lap. The Italian made his pit stop with a commanding lead and, thanks to a quick service from the AKKA ASP crew, handed over to Boguslavskiy with a clear advantage over Weerts.

The #31 Audi driver was faster than his rival during the closing 20 minutes of the race, cutting a gap of more than seven seconds to just over two at the finish, but there was no need for Weerts to risk his position. While Boguslavskiy crossed the line to secure his and Marciello's second win of the campaign, the #31 WRT Audi completed a mature run to the 2020 title.

The #14 Emil Frey Racing Lamborghini of Mikäel Grenier and Ricardo Feller finished third overall and clinched the Silver Cup class. What's more, Feller provided some of the race's best entertainment as he fought with Ryuichiro Tomita (#31 Belgian Audi Club Team WRT) for the final step of the podium. The young Swiss made his move with just eight minutes left on the clock, forcing the Japanese ace into a small error before surging around the outside and completing his pass.

Tomita held fourth despite late pressure from Giacomo Altoè in the #163 Lamborghini, the Emil Frey Racing crew having lost their shot at the title following a race two penalty. The #66 Attempto Racing Audi was sixth, followed by a quartet of Silver Cup cars. The title-winning #26 Sainteloc Racing Audi finished as runner-up, followed by the #15 Tech1 Racing Lexus, the #89 AKKA ASP Mercedes-AMG and the #108 CMR Bentley.

A spot on the podium was the perfect way for French outfit Sainteloc Racing to celebrate winning the Silver Cup teams' and drivers' championships, a job that was completed in race two. The #26 Audi of Simon Gachet and Steven Palette has been a class front-runner throughout the campaign, capturing a pair of wins at Misano and another at Magny-Cours. The latter was particularly memorable, with Gachet and Palette taking a superb overall triumph on home soil.

Pro-Am honours went to the #52 AF Corse crew of Louis Machiels and Andrea Bertolini, who ensured that Ferrari machinery swept all 10 races this season by finishing well clear of Mercedes-AMG runners SPS Automotive Performance and ERC Sport. The #93 Sky Tempesta Ferrari registered its only DNF of the season, but the teams' and drivers' titles had been secured with victory in the second race. Indeed, Cheever and teammate Chris Froggatt have been the standout performers all season, scoring five wins and as many pole positions in 2020.

Six cars failed to finish the season-ending race, including the #4 HRT Mercedes-AMG. Like the #163 Lamborghini, the German squad had already lost its shot at the title after receiving a penalty in race two. The championship therefore ended with Vanthoor and Weerts just four points clear of Boguslavskiy, while Marciello secured third despite missing the Zandvoort weekend. Tomita and Kelvin van der Linde took fourth, while the HRT duo of Engel and Stolz finished fifth.

While the Sprint Cup campaign is over, the season's main event is still to come. The Total 24 Hours of Spa will run from 22-25 October, posing a very different challenge from that faced at Circuit de Barcelona-Catalunya this weekend. Taking place during the autumn months for the first time, the marquee race has attracted a 56-car field to compete for victory in the Belgian Ardennes. 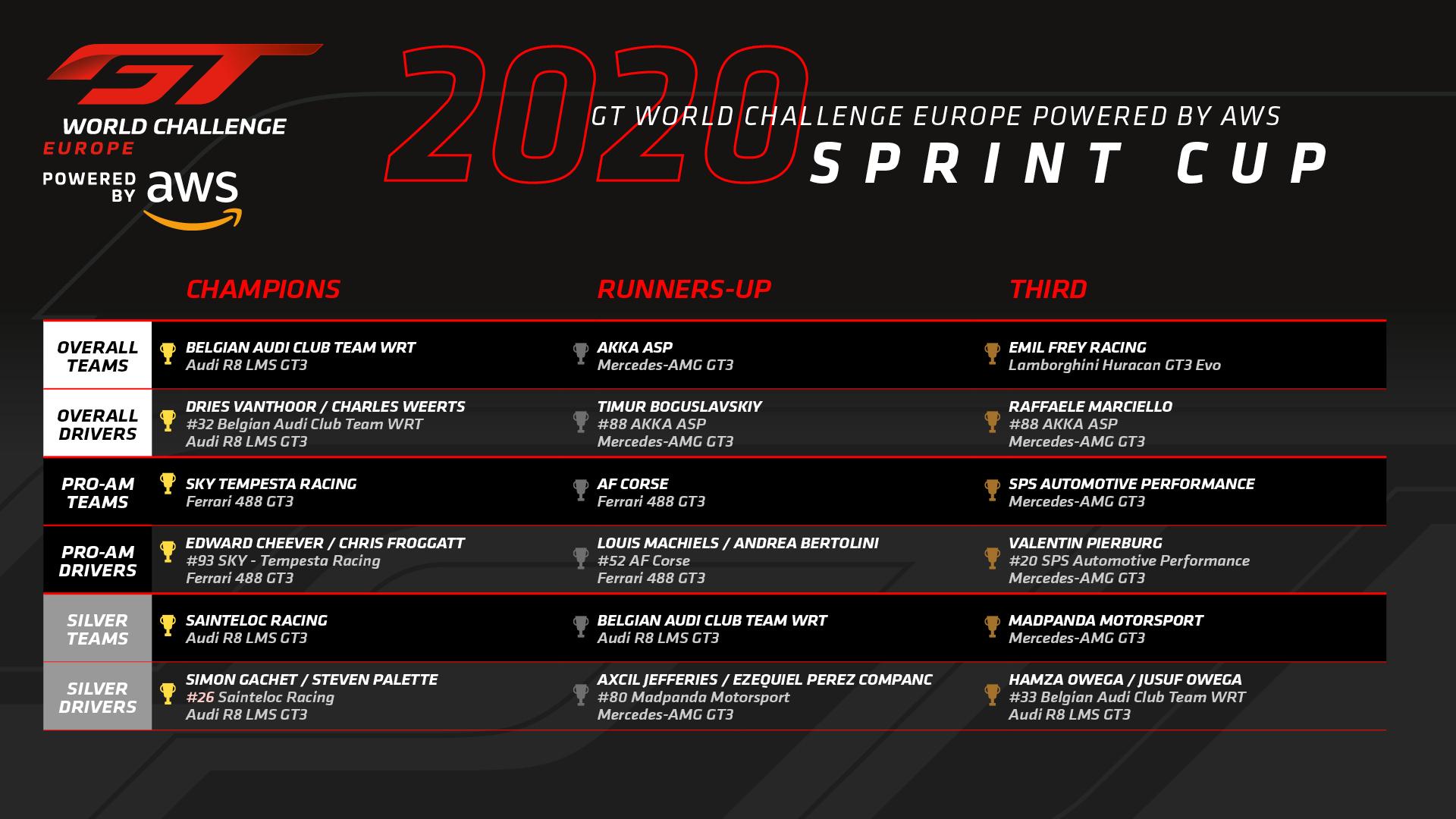