Deletraz had already impressed by scoring points in each of the previous three events and came agonisingly close to sealing victory last time out at the Nurburgring. The youngster scored a richly deserved win in today's race, resisting significant pressure throughout the one-hour Pro Series contest to capture a maiden series triumph for Porsche.

Starting from pole in his GPX Racing-liveried machine, Deletraz maintained the advantage into turn one ahead of fellow Porsche man Federico Leo. The Italian was making his first appearance in the series as a wildcard and showed instant speed at Circuit de Barcelona-Catalunya.

While there was contact further back the leading runners were unaffected and quickly settled into a rhythm, with Deletraz heading a three-car pack consisting of Leo, Lorenzo Marcucci (Audi) and Arthur Rougier (Audi). The majority of the race ran in this order, with overtaking proving tricky at the Spanish circuit.

When a move came, it was expertly executed. Marcucci got a run on Leo on the approach to turn 10 and forced the Porsche to hug the inside line as they approached the apex. This gave Marcucci a significantly better exit and the Audi was able to sweep past and into second spot.

While his rivals squabbled over position Deletraz made his escape, establishing a gap of two seconds that would prove crucial over the final few laps. Marcucci made progress, but Deletraz had enough in hand to win by a little under a second from the Audi racer.

Leo completed the podium after a fine showing, though as a wildcard the Italian was not eligible to score championship points. Rougier was fourth ahead of Ivan Pareras, ensuring that a trio of Audis joined two Porsches among the top-five.

Dan Wells was classified sixth, the best result this season for the championship’s leading Lamborghini representative. Behind him, Ezequiel Perez Companc (Mercedes-AMG), David Fumanelli (Ferrari), Nicolas Hillebrand‏ (Ferrari) and Andy Soucek completed the top-10. David Perel, who dropped from sixth on the road to 11th following a 30-second post-race penalty, took the final point thanks to wildcard Leo finishing third.

By winning today's contest, Deletraz moves to the top of the Pro Series standings with 59 points, 10 clear of Marcucci. Ben Barnicoat slips to third after a difficult race at Circuit de Barcelona-Catalunya, while consistent performer Pareras jumps to fourth thanks to another strong finish. 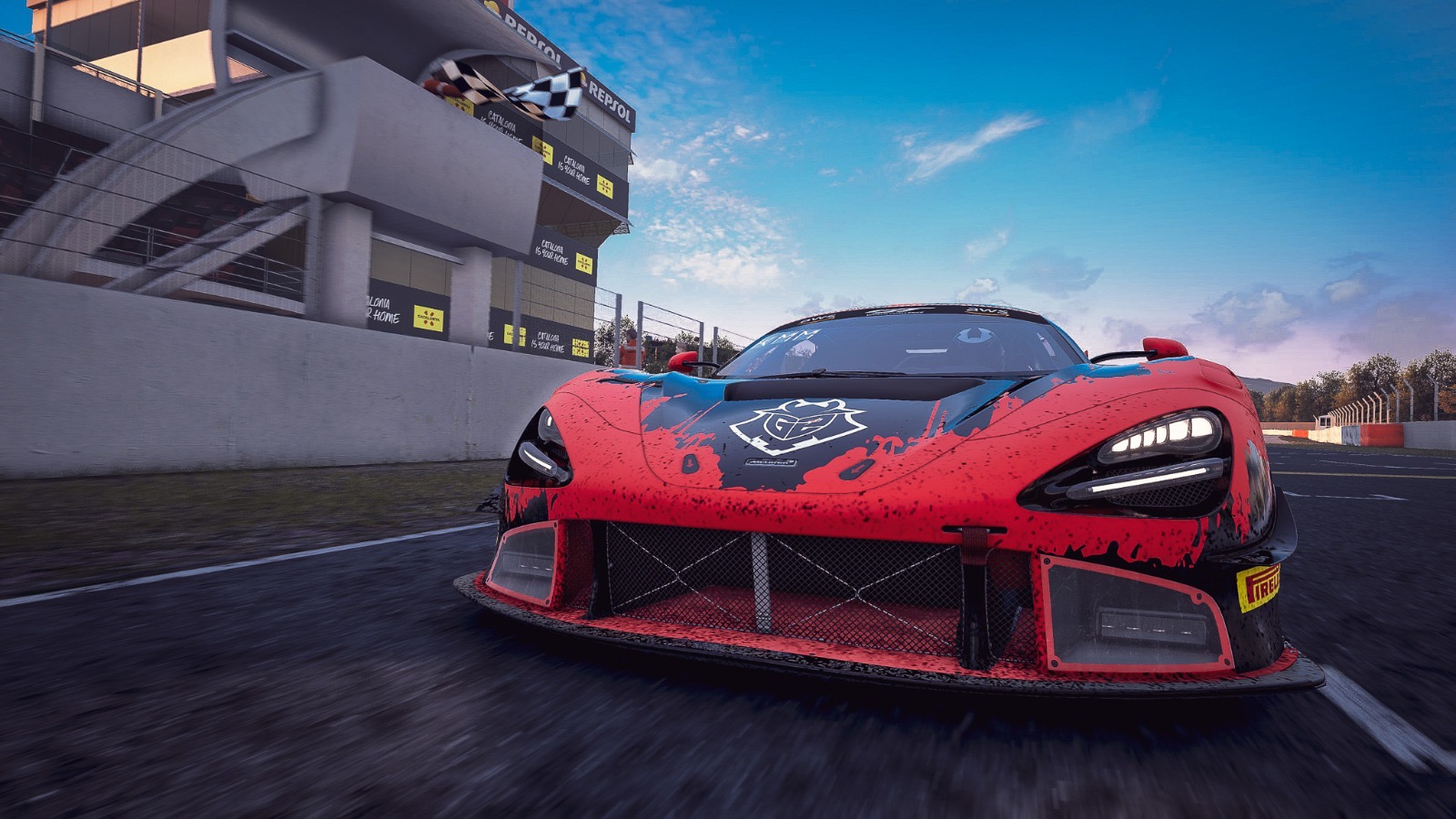 While it was Porsche and Audi that dominated the Pro contest, McLaren equipment was unstoppable in the Silver Series. Arthur Kammerer earned his first win of the season at the wheel of the 720S GT3, jumping ahead of poleman Patrick Selva at the start and keeping his cool throughout the race. Kammerer needed to be faultless, with no margin for error as Selva looked to reclaim the lead, and delivered an inch-perfect performance to claim victory.

Nils Naujoks took third place in his McLaren, charging past the Lamborghini of Kamil Franczak shortly before the half-way mark. This freed him up to hunt down Selva and, by the closing stages, Naujoks was right on his fellow McLaren driver's tail. The two fought until the final corner, with Selva just hanging on to take runner-up spot. The McLaren of Jura Petritchenko also passed Franczak to complete a dominant top-four sweep for the British marque – and ensure significant success ballast next time out.

After fifth-placed Franczak, Jan-Marcel Dietrich (Porsche) was sixth ahead of Spa winner Andrea Capoccia (Audi). Chris Hoeke (Porsche), Tobias Pfeffer (Audi) and David Tonizza (Ferrari) completed the top-10, the latter extending his record of scoring at every race. This was not enough to maintain his championship lead, however, with Selva now top of the table on 45 points. Kammerer heads the chasing pack on 43, while Tonizza slips to third with 32 points.

Organised in collaboration with Kunos Simulazioni and Ak Informatica, the SRO E-Sport GT Series is staged using Assetto Corsa Competitzione, the official video game of GT World Challenge Powered by AWS. The Pro and Silver Series will conclude their five-round campaigns on 21 June at a venue to be decided by an online fan poll, with Bathurst, Kyalami, Laguna Seca and Suzuka up for selection. Voting will take place across the SRO social media channels and is open from 21.00 CET tonight (31 May) until Friday 5 June at 20.00.

Where the action moves to next remains to be seen. But, with four world-class circuits to choose from, there is no question that round five will deliver another must-see sim racing contest as the SRO E-Sport GT Series reaches its climax.

Voting will take place across the SRO social media channels 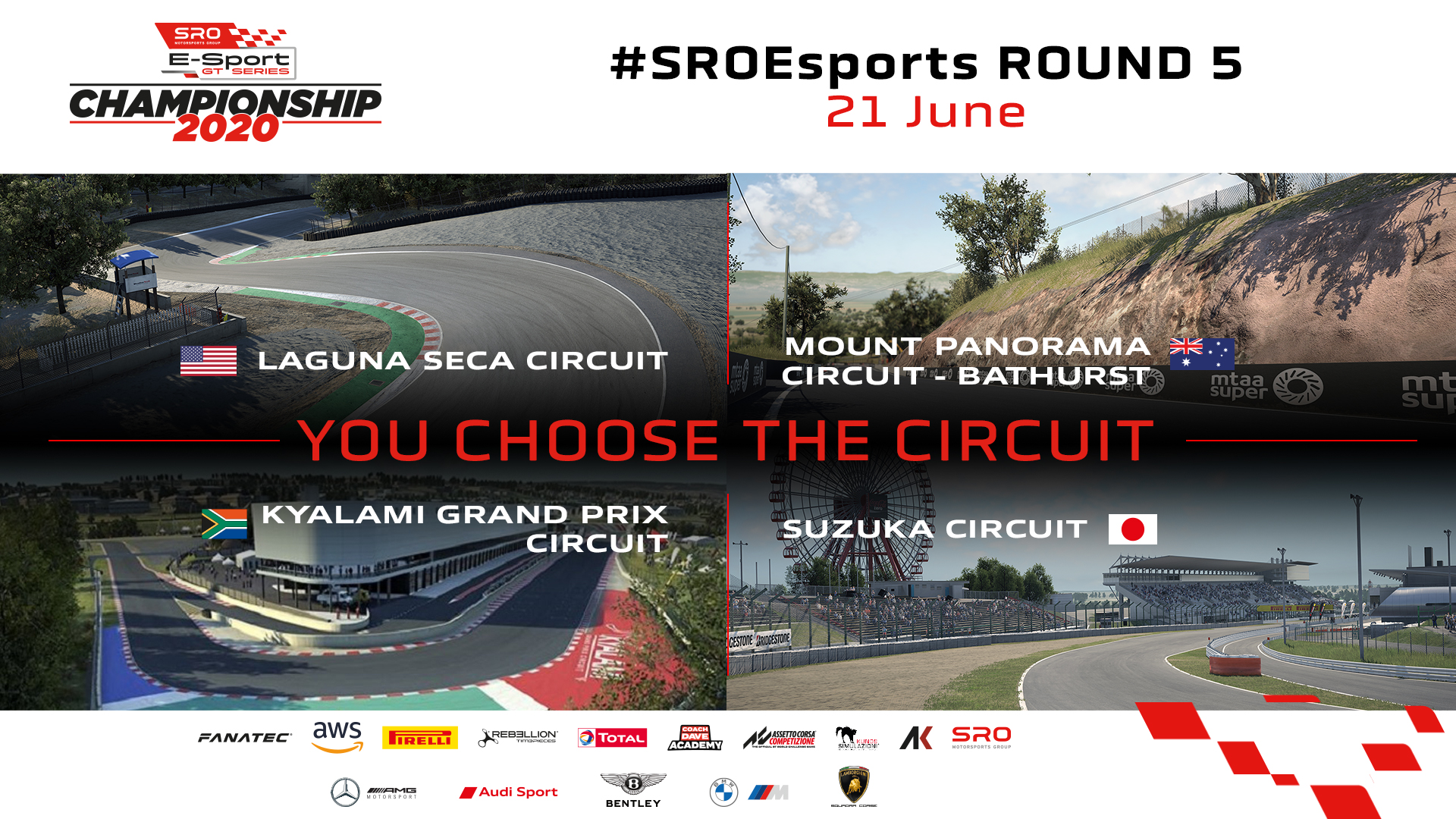