Skip to Main Content
The 2019 Blancpain GT Series will be officially launched at Circuit Paul Ricard this week (13/14 March) with two days of testing setting the scene for another action-packed season of GT3 competition.


Staged one month ahead of the opening event at Monza (12-14 April), the test will see more than 30 professional teams representing 11 globally significant brands travel to the South of France hoping to lay the foundations for a successful campaign.

With this in mind, the participants will be targeting clean running from start to finish. The forecast for the test is favourable, with sunny spells and temperatures of around 15°C predicted on both days, making it unlikely that the wet weather Pirelli tyre will be called into action.

The Lamborghini Huracan GT3 will be among the best-represented car at the test, with nine of the new-spec machines set to hit the track at Circuit Paul Ricard. Three of these will come from series newcomer Orange 1 FFF Racing, which is led by 2017 Endurance Cup drivers’ champion Andrea Caldarelli.

The Mercedes-AMG contingent will be out in force following a standout 2018 campaign that saw the German marque earn a clutch of championship trophies. Among their representatives will be reigning overall champion AKKA ASP Team and defending Endurance Cup winner Black Falcon.

Audi (R8 LMS GT3) and Ferrari (488 GT3) also remain popular. Belgian Audi Club Team WRT, Phoenix Racing and Sainteloc Racing will each field a pair of cars from the Ingolstadt brand, while seven of the Maranello-built machines will travel to the South of France.

Aston Martin (Vantage GT3), Porsche (911 GT3 R), Bentley (Continental GT3) and Honda (NSX GT3) will also be represented by multiple cars at Circuit Paul Ricard. There will be a single Lexus RC F GT3 courtesy of series newcomer Panis-Barthez/Tech 1, a McLaren 720S GT3, while BMW will be present thanks to the returning Boutsen Ginion outfit and its M6 GT3.

Though they will feature many of the contenders set to compete on-track during the year ahead, the test days will not fully reflect the makeup of the 2019 grid. Indeed, the complete entry list for the 2019 Blancpain GT Series will be revealed during the test.

The trip to Circuit Paul Ricard is the first of several official test sessions set to be staged during the 2019 season. In addition to the annual Total 24 Hours of Spa test – which this year expands to two days on 2/3 July – further running will be available ahead of the Monza, Silverstone and Barcelona rounds of the Endurance Cup, and the Blancpain GT World Challenge Europe events at Misano and Budapest.

For now, however, the focus is on Circuit Paul Ricard and two crucial days of running ahead of the new campaign. The battle to be crowned 2019 Blancpain GT Series champion begins here. 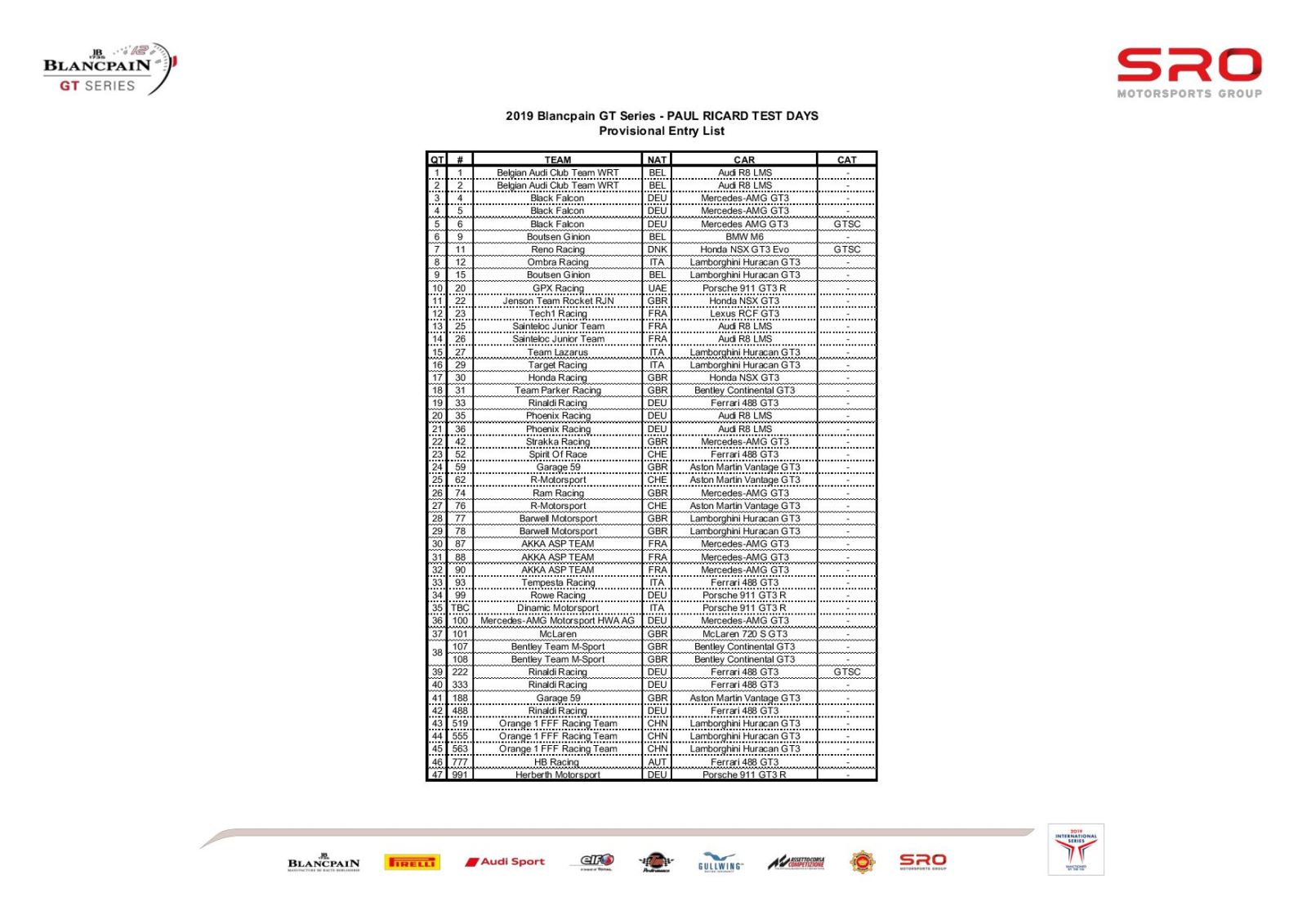