The #34 Walkenhorst Motorsport BMW M6 GT3 scored a truly memorable victory at the 70th edition Total 24 Hours of Spa thanks to a superb team effort from the German squad and its driver trio of Philipp Eng, Tom Blomqvist and Christian Krognes.

It was a remarkable achievement for the Walkenhorst outfit, which was fielding the #34 BMW M6 GT3 as a one-off effort for the 70th edition 24 Hours and making its first appearance in the Pro class at Spa.

Its driver line-up had never previously contested a 24-hour race together and, while the squad has no shortage of experience as a full-time Blancpain GT Series entrant in the Am Cup category, its ability to beat the best GT racing teams in the world was nothing short of phenomenal.

While this was a memorable first for the team, for BMW the victory represented a record-extending 24th triumph at the Belgian endurance classic and a third in four years. Eng now has two wins at the Total 24 Hours of Spa to his name, having also triumphed in a BMW at the 2016 edition.

The #34 crew was among the front-runners throughout the race, moving into the lead by the nine-hour mark and remaining there into the early hours of Sunday morning. This proved their ability to manage the most challenging hours of an endurance contest, with the car navigating several full-course yellow periods during the 24 Hours.

Indeed, the Walkenhorst car was at the head of the pack when the race was red flagged for the only time following a sizeable accident involving the #31 Team Parker Racing Bentley of Andy Meyrick and Jürgen Krebs in the #666 Attempto Racing Lamborghini Huracan GT3. Both men were extracted and transferred to hospital with non-life-threatening injuries.

The Walkenhorst car was shuffled back on pit strategy when the race hit three-quarters distance, but patient driving and a shrewd pit strategy eventually returned the #34 BMW to the front of the pack.

Their chief rival from the 18th hour onwards was another BMW M6 GT3, the #99 fielded by the ROWE Racing squad, which had made gradual progress from 11th on the grid.

The #99 BMW leapt up the order and into the lead during the morning hours, but the Walkenhorst machine remained within striking distance. Crucially, the #34 crew were able to reach the end of the race by making one fewer pit stop than the other BMW, which placed them back at the head of the order for the final quarter of the race.

They managed this high-pressure situation perfectly, edging away from the ROWE car over the final two hours to eventually claim victory by 10.4 seconds. The #99 BMW followed them home to secure a one-two finish for the Bavarian marque on a circuit it has enjoyed so much success on throughout the years.

The final place on the overall podium went to the #29 Montaplast by Land-Motorsport Audi R8 LMS, whose young crew of Kelvin van der Linde, Sheldon van der Linde and Jeffrey Schmidt delivered a performance that belied their years.

The Land car led at the six-hour mark and was a factor in the race from start to finish. The #29 Audi made more stops than any other top-20 crew, but the drivers – two of whom are silver-graded – delivered a mistake-free 24 Hours to secure their place on the rostrum.

Audi Sport Team Sainteloc narrowly missed out on backing up their win at last year’s race with another podium after running out of fuel during the final hour, costing the #25 R8 LMS significant time as it retuned to the pits. The #4 Mercedes-AMG Team Black Falcon car of Maro Engel, Yelmer Buurman and Luca Stolz completed the top five.

The crew made impressive progress during the 24 Hours, having qualified 11th out of 12 Pro-Am runners and 53rd overall. The Ferrari 488 GT3 moved into the lead during the final quarter of the race, then edged away to win their category by a lap.

They beat the #42 Strakka Racing Mercedes-AMG GT3, which had led Pro-Am for much of the middle phase of the race but slipped to second during the closing hours.

Third place belonged to the #175 SunEnergy1 Team HTP Motorsport Mercedes-AMG GT3 machine, which took 20th spot overall. Indeed, all three of these Pro-Am cars finished among the top-20, with the winning Rinaldi-Ferrari an excellent 15th in the overall standings.

In the Silver Cup, the #12 Ombra Racing Lamborghini Huracan GT3 was dominant at the head of the class for much of the race but had to fend off intense late pressure to secure victory.

The pole-sitting #54 Emil Frey Racing G3 Jaguar paced the early stages, but by the sixth hour the Ombra car had advanced to the head of the field, with the #78 Barwell Motorsport Lamborghini Huracan GT3 its closest rival.

This situation remained unchanged until the chequered flag fell some 18 hours later, but that tells only half of the story. With just 20 minutes to run the #12 Lamborghini came under huge pressure from the Barwell car, which almost forced its way past at La Source.

But Ombra pilot Alex Frassinetti held firm to secure class honours for the car he shares with Romain Monti, Andrea Rizzoli and Kang Ling. The Barwell-Lamborghini was next across the line, ahead of the #6 Black Falcon Mercedes-AMG, which completed the podium after an excellent comeback drive from the very back of the grid.

While the Barwell squad could not quite secure Silver honours, they nevertheless took home a set of Total 24 Hours of Spa winners’ trophies thanks to their #77 Lamborghini Huracan GT3’s dominant Am Cup performance.

The Barwell machine assumed control at one-quarter distance and held its lead for the remainder of the race, spending more time at the head of its class than any other car in this year’s 24 Hours.

This was an especially sweet win for Amstutz, who was involved in a fiery accident during last year’s 24 Hours and required the bravery of track marshal Leen Coremans to save his life. 12 month later, he is a Total 24 Hours of Spa winner.

The Coupe du Roi, which rewards the manufacturer with the best results across Pro, Pro-Am and Am Cup at six, 12 and 24 hours, was won by Mercedes-AMG. The German marque was consistent across the categories and took home the award from a thrilling 70th edition of the Belgian endurance classic. 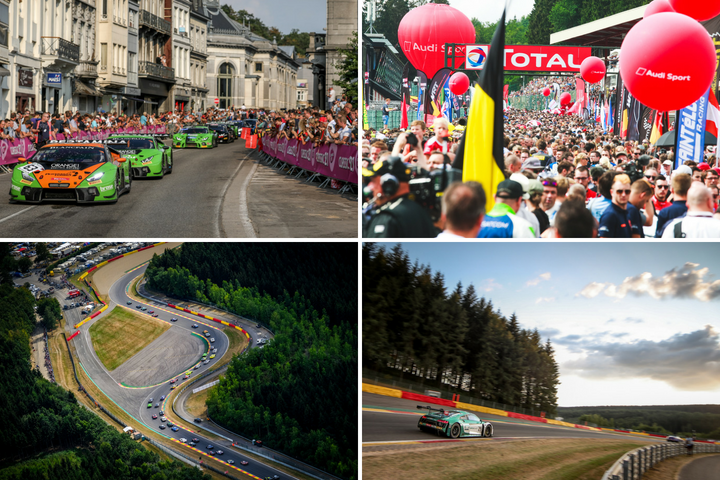 Staged in perfect weather conditions from start to finish, the race capped a spectacular weekend celebrating the 70th edition Total 24 Hours of Spa, including Wednesday’s annual parade into Spa town centre and an unforgettable concert that brought a music festival atmosphere to the event.

What’s more, the countdown to next year’s race has already begun, with the 2019 Total 24 Hours of Spa set to take place from 25-28 July. If it can match this year’s festivities, it will be another must-attend contest in the Belgian Ardennes. 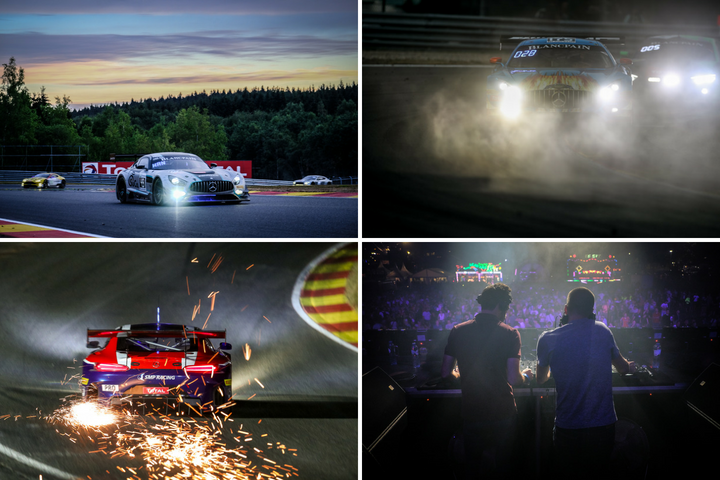 Philipp Eng, #34 Walkenhorst Motorsport BMW M6 GT3: “This race is very exhausting. I must admit that I feel pretty tired, but I also feel very happy, especially for the Walkenhorst team. It’s the first time that they are running a Pro car at this amazing event and to come here and immediately win it is amazing. I am also very happy for my teammate Christian. He is not a professional driver and has a day job, but he put in a really good performance. Hats off to him, and to Tom of course. He was a legend, as always.”

Alexander Sims, #99 ROWE Racing BMW M6 GT3: “I know that Philipp’s ability is second to none and, realistically, I wasn’t going to be able to out-drive him today. We were on very similar strategies at the end of the race and I just kept on it to see what would happen. Full credit to the Walkenhorst guys, it’s fantastic to see them get this victory. I also want to say a huge thanks to ROWE, because our car has been reliable and fast. While we didn’t quite have the ultimate pace it’s been fantastic, and it’s very cool to get a one-two for BMW Motorsport.”

Kelvin van der Linde, #29 Montaplast by Land-Motorsport Audi R8 LMS: “We pushed the whole way through and never gave up. Sometimes it went our way, sometimes not, but we really just drove like we were doing qualifying laps from start to finish. The car and the tyres stayed in one piece and we managed to bring it home. It’s Land’s first race in the Blancpain GT Series, and this is a fantastic result for them.”

David Perel, #333 Rinaldi Racing Ferrari 488 GT3: “A big, big thank you to Michele Rinaldi for giving me a chance to drive. For us to be here is so surreal. We did not have any issues and that is amazing. I had the same thing last year in the Am Cup car and I did not think that it could be repeated! Michele is a great engineer and gave us a perfect car.”

Kang Ling, #12 Ombra Racing Lamborghini Huracan GT3: “It is unbelievable to win the Total 24 Hours of Spa on my first attempt. We had a very clean race. We were not the fastest, but we made no mistakes and I have three very strong teammates. I’m super, super happy about this result.”

Adrian Amstutz, #77 Barwell Motorsport Lamborghini Huracan GT3: “After my crash here last year I was not even sure that I would ever race again until this February. It is thanks to the marshals that I am here, especially Leen Coremans and Leopold Adriaans. Without them there would not have been a race for me today. I am eternally grateful.”