With the French track shrouded in darkness, Albert Costa was aboard the Lexus RC F for the deciding stint. The Spanish ace made the headline move with just four corners remaining, passing the #7 Bentley Team M-Sport Continental GT3 of Jules Gounon to secure the first Blancpain GT Series win for the Japanese manufacturer.

In fact, this was also the first Endurance Cup victory for the Emil Frey Racing squad and all three of its drivers, with Costa celebrating his maiden triumph alongside crew-mates Christian Klien and Marco Seefried.

The #14 Lexus was in contention for a strong result throughout the long-distance race, but it was only late in the contest that it emerged as a serious threat for top spot.

Indeed, the #58 Garage 59 McLaren 650 S led for the vast majority of the first five hours. Starting from second on the 50-car grid, the McLaren assumed the lead almost immediately, while the pole-sitting #76 R-Motorsport Aston Martin V12 Vantage plummeted down the order.

The #58 crew of Ben Barnicoat, Andrew Watson and Come Ledogar all delivered excellent stints, with their car leading by as much as 12 seconds at one stage.

But their race began to unravel after the #72 SMP Racing Ferrari 488 took the lead at the final round of pit stops, having saved their joker stop – for which there is no minimum time – until the last possible moment.

The Garage 59 crew then hit more trouble when they received a drive-through penalty for an infringement during their final pit stop, all but ending their chances of the win. 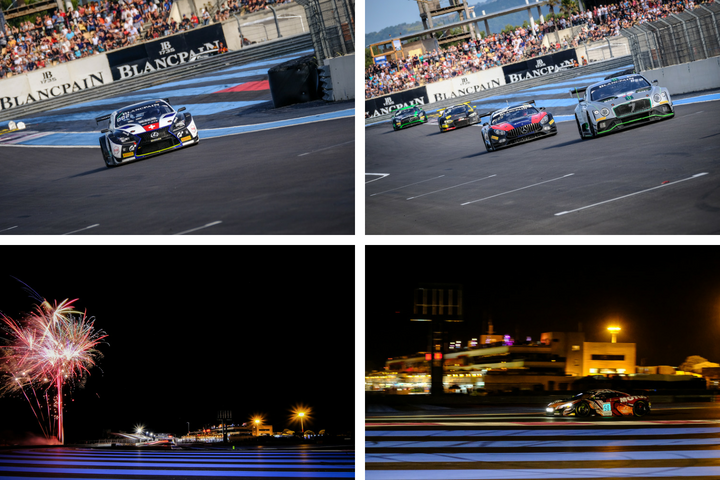 Saving their joker for the final stop was a shrewd move by the SMP-Ferrari crew of Mikhail Aleshin, Davide Rigon and Miguel Molina. It looked to have ensured them the win late on, but their hopes were dashed in cruel fashion when a suspension issue forced them out of the race.

In the space of a few dramatic minutes, the two leading cars had fallen out of contention.

This promoted Bentley’s #7 Continental GT3 into top spot, though it was not there through fortune alone. The car had moved from 18th on the grid to second thanks to a clever use of their joker stop during Jordan Pepper’s opening stint. This elevated the car to P4, after which Steven Kane pushed the crew further up the order and into second.

Gounon handled the final stint and was passed by the fast-charging Molina, but when both of the leaders hit problems the young Frenchman found himself in P1.

But, as the clock ticked down, Costa closed in. The Emil Frey driver reduced the gap, although a late full-course yellow looked to have put Gounon beyond reach. Costa was able to close in once more, but as the final lap began the Bentley still held a slender advantage.

Then, with just seconds left before the chequered flag flew, Gounon suffered a problem with the Bentley’s bonnet. Costa pounced and the Lexus surged into the lead, crossing the line for the final time as fireworks lit up the skies above Circuit Paul Ricard.

Silver Cup honours went to the #78 Barwell Motorsport Lamborghini Huracan of Michele Beretta, Sandy Mitchell and Martin Kodric, who took the chequered flag more than half a minute clear of the #6 Black Falcon Mercedes-AMG to secure their first Blancpain GT Series win of 2018.

A Ferrari 488 was on top in the Pro-Am category, where the #51 AF Corse machine bagged the class win thanks to the efforts of Duncan Cameron, Gianluca de Lorenzi and Matt Griffin. The #49 Ram Racing Mercedes-AMG had led much of the race but, as was the case in the Pro class, a dramatic final hour saw a change at the top of the order.

Arguably the most impressive performance of the race came in the Am Cup category, where the #188 Garage 59 McLaren 650 S of Chris Harris, Alexander West and Chris Goodwin delivered a faultless drive to victory. Indeed, the McLaren finished 18th overall from a starting field of 50, securing the manufacturer a class win 48 years on from the death of its founding father Bruce McLaren.

Following the dramatic events at Circuit Paul Ricard, the attentions of drivers and teams will turn to the 70th edition of the Total 24 Hours of Spa. The official test day is scheduled for  July 3rd, while the main event will take place on 26-29 July at the legendary Belgian venue.

Should the 24 Hours end in a similar manner to the Circuit Paul Ricard contest, it will be one for the record books.

Albert Costa, #14 Emil Frey Racing Lexus RC F GT3: “I think I’m still dreaming right now! When I got the radio message saying that the #72 Ferrari had a puncture, I couldn’t believe I was P2. I was pushing, but I also wanted to save the tyres as there was still 40 minutes to go. I saw that Jules was strong in the first sector, but noticed that the front of his car was touching the asphalt and losing a lot of speed. The Lexus had good pace in the final sector and I managed to reduce the gap six laps in a row until I finally overtook him. I am very proud of my teammates and the whole Emil Frey team, especially when you think about where we have come from.”

Jules Gounon, #7 Bentley Team M-Sport Continental GT3: "At one point I was not sure that we would make it to the finish. When the bonnet came off, I couldn't really see the tarmac because we sit very low in the car. But we need to be happy. This is the first year for our car and to be on the podium after just three races is a really great team effort and a great effort from Bentley. It's always hard to lose a race in the last sector after six hours, but I am proud to race with my two teammates and with Bentley."

Come Ledogar, #58 Garage 59 McLaren 650 S GT3: "I am obviously disappointed as without the penalty the race might have ended up better for us. Still, this was a difficult podium to achieve and I think we deserve a big celebration for our performance. We got a drive-through penalty because of a mistake, but looking at all the work Garage 59 has done so far this year gives us confidence for the big one.”

Sandy Mitchell, #78 Barwell Motorsport Lamborghini Huracan GT3: “Compared with the first two races of the season, we didn’t have any problems here to stop us from winning. At Monza we had an issue with the engine and at Silverstone it was a gearbox failure. Here we had a consistent race and I’m glad that we ended up where we are meant to be: on the podium!”

Matt Griffin, #51 AF Corse Ferrari 488 GT3: “It was a great race. Duncan was amazing in both of his stints, the second one particularly, and Gianluca was there to back it up. It was tough for me because of the fight I had with Seb Morris’ Bentley. This race gave us confidence for the Total 24 Hours of Spa and puts us in a good championship position as well.”

Alexander West, #188 Garage 59 McLaren 650 S GT3: “Chris [Harris] was flawless in his stint and handed over the car with an impressive advantage. I lost the lead leaving the pit lane, but managed to get back the position quickly. We are very pleased with this win, which backs up our Silverstone victory. Garage 59 did a great job throughout the whole weekend.”