In 2018 the Total 24 Hours of Spa celebrates its 70th edition. Through the years, the endurance classic has produced some of the highlights of international long-distance racing. In this three-part series, we take a closer look at the history of the event.

The Spa 24 Hours lost its world championship status after the 1953 edition and it would be 11 years before the race was organised again. Following a project by Hubert de Harlez of the Royal Automobile Club of Belgium and journalist-driver Paul Frère, the Spa 24 Hours was revived in 1964. Their idea was as simple as it was brilliant: to set itself apart from the Le Mans 24 Hours, the Spa race would now be reserved for touring cars.

Factory teams from Alfa Romeo, BMC, BMW, Citroën, Glas, Ford, Lancia and Mercedes were on the entry list and the 1964 event lived up to expectations. Although the gearbox of their Mercedes 300 SE was almost completely gone (at the finish only two out of five gears were functioning) Robert Crevits and Gustave Gosselin took the first win of the new era, holding a one-lap advantage over the BMW 1800Ti of Aaltonen-Hahne.

The Bavarian manufacturer got its revenge during the next two editions, with wins for the Ickx brothers Pascal (with Gérard Langlois in 1965) and Jacky (with Hubert Hahne in 1966). Both the 1800 TISA (Touring Internationale Sonderausführung) and 2000 TI were developments of the BMW 1500, the car that saved the marque in 1961 after its Bubble cars and big V8 saloons were unable to secure the firm’s future.

Strangely enough the Porsche 911, considered by many to be a thoroughbred GT, was allowed to face the touring cars during the next three editions. This led to victories for Gaban-‘Pedro’ (1967) Kremer-Kelleners-Kauhsen (1968) and the pairing of Chasseuil and Ballot-Léna (1969).

The late sixties saw some exotic machinery arrive in the Belgian Ardennes, such as the Mazda R100. The Japanese firm was trying to gain a commercial foothold in Europe and found Belgium, with its free open market, a very favourable country in which to do business. The one-litre twin-rotor Wankel engines were an eye-opener and, with a soundlevel of 150 decibels, quite loud as well!

The golden seventies saw a lasting duel between the Ford Capri RS and BMW 3.0 CSL. The highlight of this face-off was the 1973 edition. Over 100,000 spectators witnessed a close fight between the two manufacturers, but during the night tragedy struck when two incidents cost three drivers their lives.

With speeds constantly increasing – in 1973 Hans Stuck’s lap average was 221.5 km/h, reaching top speeds of almost 260 km/h – the Royal Automobile Club of Belgium realised something had to be done. The newly-created ‘Groupe Francorchamps’ – a set of rules allowing cars of Group 1 to be modified, but excluding the fast Group 2 cars – proved to be a precursor to future international rules. It did not alter BMW’s winning streak, however, as the German manufacturer went on to win the next three editions.

In 1977 the rulebook changed again with organisers restricting the race to Group 1 cars, slightly modified production cars. The final two editions on the old 14km circuit were won by BMW and Ford respectively. In 1979 the newly modified track, almost 7km track in length, was used for the first time. Belgian brothers Jean-Michel and Philippe Martin took the inaugural win at the wheel of their Ford Capri, a feat they would repeat the following year. With the exceptions of 1981 (the Mazda RX-7 of Tom Walkinshaw and Pierre Dieudonné) and 1984 (Jaguar XJS of Walkinshaw-Heyer-Percy), the Ford vs. BMW war raged on, mostly ending in favour of the latter. The 1985 edition was marked by a series of total electrical blackouts, neutralising the race on several occasions. That – as well as heavy rain towards the end of the event – did not prevent the winning BMW 635 CSi of Ravaglia, Berger and Surer from breaking the 500-lap barrier for the first time. 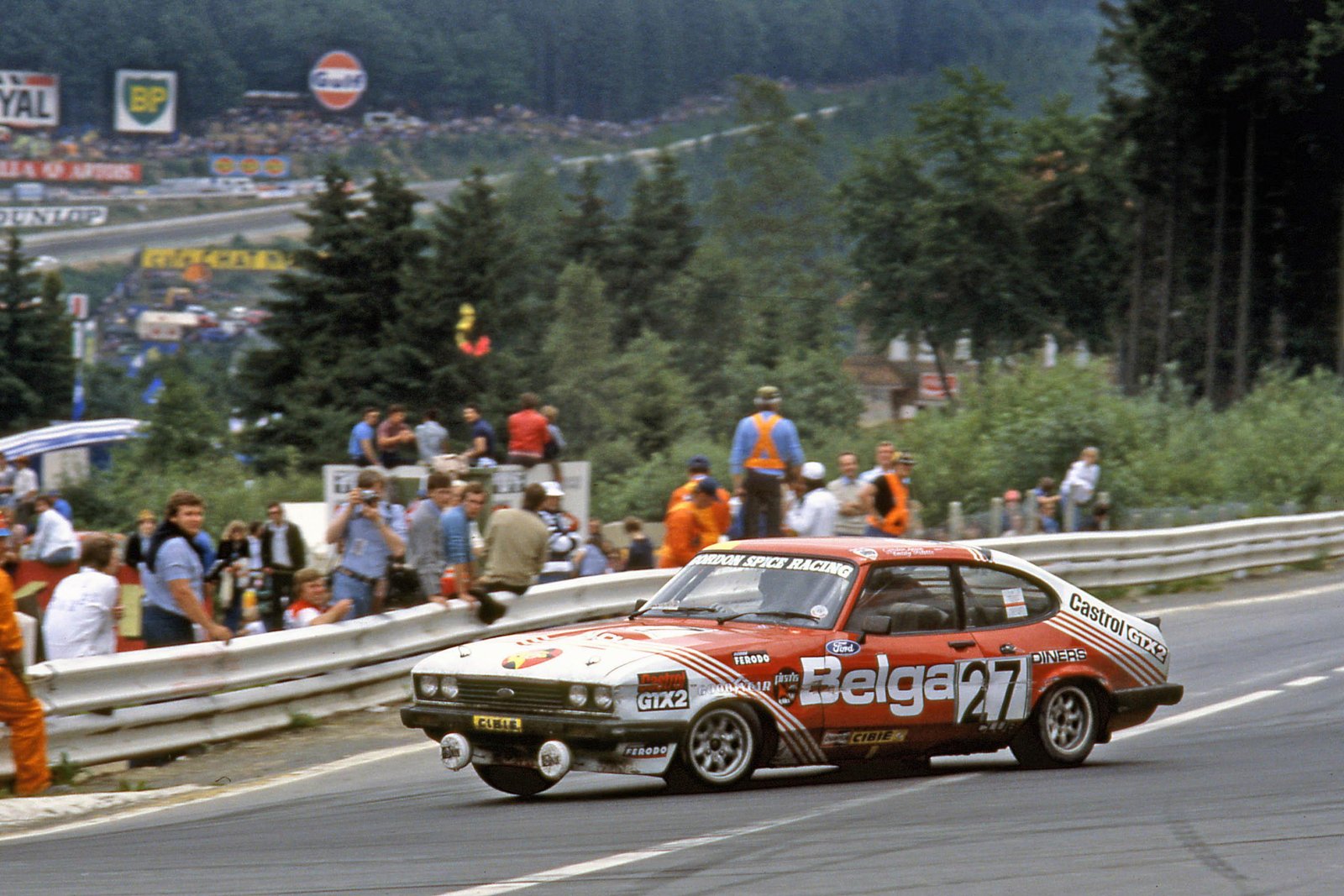 But by the end of the eighties the touring car category was in decline. The 1987 World Championship proved to be a failure and in 1989 the European Touring Car Championship was cancelled by the FIA. This decision left the Spa 24 Hours without an international set of rules and the organisers had to open up the race to Group N and GT cars, in particular any that conformed to the Belgian interpretation of the Group N rules. That not only led to full starting grids, but also to the appearance of exotic machinery like the Ferrari Mondial of former F1 world champion Keke Rosberg.

Following the 1991 edition, won by the powerful and technologically advanced Nissan Skyline, GT entries went from strength to strength. In 1992 touring cars still held the upper hand, with Steve Soper passing fellow BMW driver Eric van de Poele in the dying laps to beat him by a mere 0.48 seconds, allowing Soper’s co-driver Jean-Michel Martin to become the first four-time Spa 24 Hours winner. But in 1993 the GT Porsches proved to be in a class of their own. The race was stopped on Sunday morning, however, following the passing of King Baudouin I of Belgium. 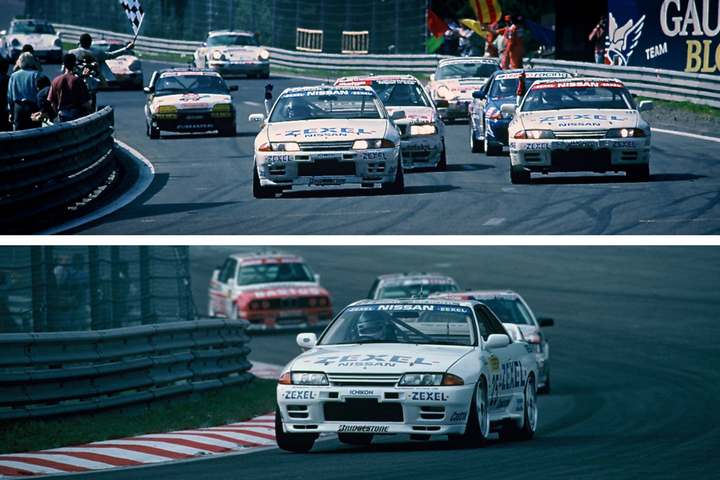 That 1993 edition inspired the organisers to again change the top class of the Spa 24 Hours. The FIA Class 2 machinery, better known as ‘Super Touring’ cars, now became the weapon of choice. These two-litre machines were originally designed for short sprint events, but proved to be up to the task of long-distance racing as well. Although factory teams from Audi, Honda, Opel, Peugeot and Toyota did everything they could to find a chink in the armour, BMW continued to dominate, winning every edition of the race between 1994 and 1997. This allowed Thierry Tassin to join Jean-Michel Martin as a four-time Spa 24 Hours winner.

With costs increasing significantly, the Super Touring car-rules were replaced by the cheaper Super Production car rules in 1998. Although many a manufacturer entered (semi-)works teams, the less than impressive looks of the cars meant the appeal of the Spa 24 Hours was in sharp decline.

Time to begin a new chapter…