The Blancpain GT Series will demonstrate its enhanced commitment to the Pro-Am and Am classes in 2018, having pre-selected 26 Pro cars for the upcoming Endurance Cup campaign.

This self-imposed limit is intended to tackle the increased professionalisation that has been seen in the series during recent years. This in turn will restore the balance between the Pro, Pro-Am and Am classes which made the long-lasting success of the Endurance Cup of the Blancpain GT Series. From grids featuring 11 Pro cars when the original Blancpain Endurance Series was launched in 2011, that number climbed as high as 32 during 2017 and was set to expand still further this year

While this growth speaks to the success of the series, it also runs counter to the desire to place equal importance on professional and non-professional drivers. To strengthen this commitment and preserve the identity of the Blancpain GT Series, SRO Motorsports Group announced last year that it would cap the number of Endurance Cup cars with a full Pro line-up at 26.

This number has now been reached, with 26 entries pre-selected for the 2018 season. As outlined in the list below, this year’s Endurance Cup will feature Pro class representatives from a record number of 11 manufacturers: Aston Martin, Audi, Bentley, BMW, Ferrari, Lamborghini, Lexus, McLaren, Mercedes-AMG, Nissan, and Porsche.

An exception to this rule will be made for the Total 24 Hours of Spa (26-29 July). Furthermore, any team fielding an additional Pro car at Spa will be eligible to enter this car in the Blancpain GT Series Endurance Cup round at Paul Ricard (1/2 June), which is seen as a preparatory event for the 24-hour race.

Stephane Ratel, Founder and CEO of SRO Motorsports Group: “I am pleased to announce our pre-selection of 26 Pro entries for the Blancpain GT Series Endurance Cup. We made a firm commitment to this limit and I am glad to say that we are standing by our word.

“While it would have been possible to exceed this number in the Endurance Cup, it was more important to show our renewed commitment to Pro-Am racing. I have been involved with all-Pro championships before, which strengthens my belief in maintaining a balance between professional and non-professional drivers.”

“I was pleased to hear the positive response we received when the cap was first revealed last year. I hope that there will be a similar reaction now that we have demonstrated the strength of our commitment.”

The full-season entry process will remain open until February 28th. 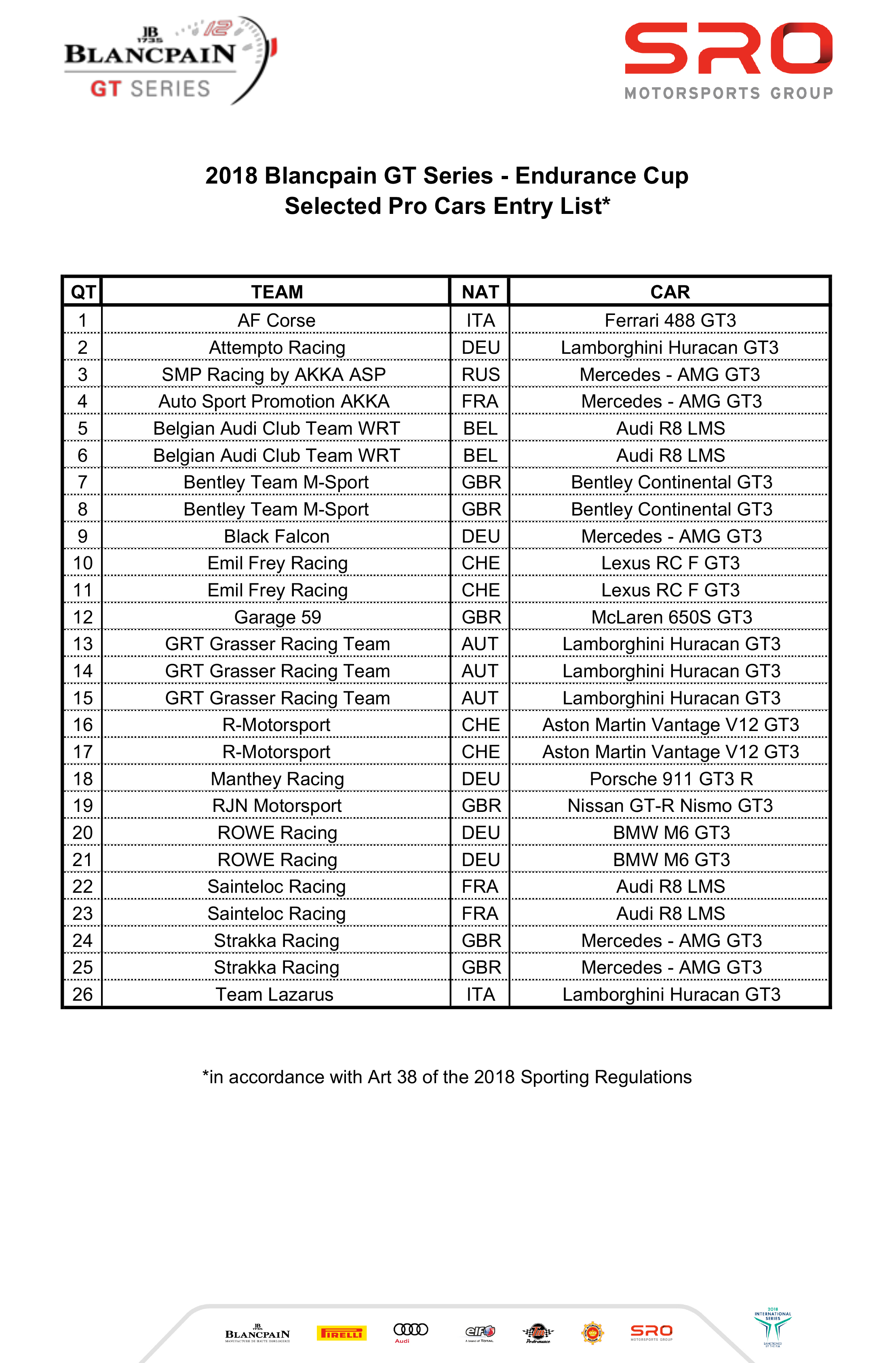