• Both GT and single-seater championships represented

The Blancpain GT Series has confirmed an impressive line-up of support events ahead of what promises to be an action-packed 2018 season.

GT and single-seater championships will form part of a high-octane itinerary throughout the upcoming campaign, ensuring that each of the 10 rounds provides fans with a wealth of on-track entertainment.

The Lamborghini Super Trofeo will once again play a key supporting role in 2018, extending a relationship that stretches back to 2011. This promises to be a landmark year for the Super Trofeo organisation, which celebrates the 10th season of competition for its European championship.

The popular one-make series will deploy a new Huracán Super Trofeo EVO in 2018, with improved aerodynamics and safety features among the developments that will drive standards forwards even further.

Five rounds will run alongside Blancpain GT Series events, beginning at the historic Monza circuit in support of the opening Endurance Cup race of the 2018 season (20-22 April).

The supporting cast for 2018 is not limited to GT machinery. Blancpain GT Series spectators will have even greater opportunity to catch a glimpse of the racing stars of tomorrow this season, with the ultra-competitive Formula Renault Eurocup expanding its relationship with the championship.

Having been part of the support bill at two Blancpain GT Series events in 2017 the Renault-powered category will be present at five rounds this season. The first will be at Monza, followed by Silverstone, the Total 24 Hours of Spa, Hungaroring (31 August-2 September) and finally the Nürburgring.

There will be plenty more GT action to keep the crowds entertained at every Blancpain GT Series event of 2018. The GT4 European Series will be present at all five rounds of the Blancpain GT Series Sprint Cup this season, beginning at Zolder (6-8 April) and concluding at the Nürburgring.

Featuring GT4 machinery from 13 prestigious brands, including Aston Martin, Porsche, Mercedes, and Audi, this competitive category enjoys a healthy combination of experienced racers and hungry young talents looking to take the next step. It promises to go from strength to strength in 2018 as it becomes even more closely aligned with the Blancpain GT Series. 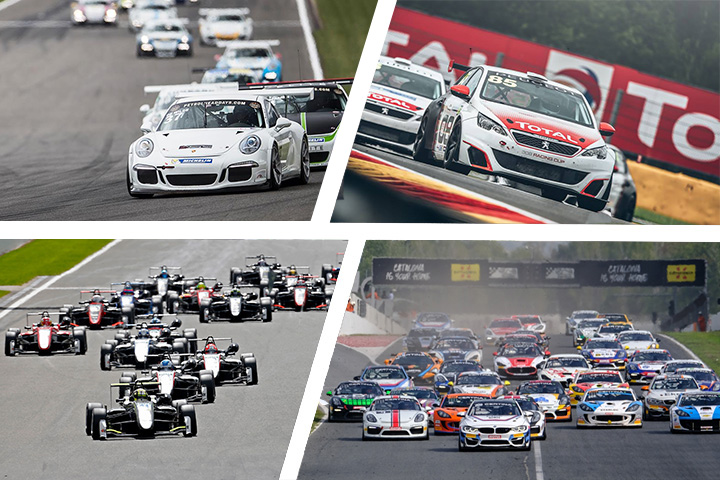 This year’s Total 24 Hours of Spa promises to be bigger and better than ever, with the iconic endurance race celebrating its 70th edition in 2018.  To further strengthen the on-track action, the prestigious FIA Formula 3 European Championship will once again join the supporting cast.

2018 will represent the third successive year in which FIA Formula 3 Championship competes as part of the Total 24 Hours of Spa. The continental championship provides another key development series for the GT and single-seater stars of the future, among them 2013 champion and current Blancpain GT Series racer Raffaele Marciello.

The race in the Ardennes will see further support action from the Porsche GT3 Cup Challenge Benelux, which makes its second appearance alongside the Blancpain GT Series following a successful debut at Circuit de Barcelona-Catalunya in 2017.

One of many successful Porsche Cup championships competing across the globe, the Benelux series makes use of the Stuttgart marque’s iconic 991 machine. Competing as part of the 70th anniversary Total 24 Hours of Spa will represent its headline event in 2018.  Together with regular support series Formula Renault Eurocup and Lamborghini Super Trofeo, an action-packed weekend is guaranteed at Spa.

Additional categories will join the Blancpain GT Series at selected rounds throughout the upcoming campaign. For the season-opening contest at Zolder the Belcar Endurance Championship, Youngtimer Cup and Historic Cup will add a distinctly local flavour to proceedings. This trio of popular domestic categories will begin their 2018 season alongside the Blancpain GT Series Sprint Cup, making for a busy weekend at the Belgian circuit.

Paul Ricard will witness the debut race weekend for the Alpine Europa Cup. This one-make series for the revived A110 model is new in 2018 and will join the Blancpain GT Series support bill at the French Grand Prix circuit.

Using a brand-new version of the iconic Alpine sportscar, the championship will embark on a six-race schedule this year with Paul Ricard representing its first stop. The competition version of the A110 is fully race-modified to FIA standards and promises to produce entertaining on-track competition.

The Blancpain GT Series Sprint Cup event at Misano will feature additional support from a pair of national championships, with touring cars represented by the TCR DSG. Approaching its third season as a standalone championship, TCR Italia will make its first appearance alongside the Blancpain GT Series Sprint Cup at Misano with machinery from the likes of Audi, Alfa Romeo, and Honda on display.

Italy’s Trofeo Abarth Selenia Series will also be on-track at Misano, using a race-tuned version of the Turin marque’s 595 model.

2018 brings fresh developments that promise to deliver an even better year of racing for the series. What’s more, the trip to Spain alongside the Blancpain GT Series represents the only round to take place outside France, making for a particularly significant event.

In addition, the Circuit de Barcelona-Catalunya event will also see action from the Peugeot 308 Racing Cup and Porsche Carrera Cup France, both of which are the regular support series for FFSA French GT Championship.

The Peugeot category uses a competition version of the French manufacturer’s familiar compact car, while the Carrera Cupis embarking on its maiden season with the new Porsche 911 GT3. When it comes to racing, both can be relied upon to pack a punch.

The breadth of support events on offer is certainly impressive, with regular action from GT3, GT4 and single-seater categories. What’s more, the addition of touring cars and a diverse range of one-make cups means the Blancpain GT Series is the hottest ticket for 2018.

The official test days at Paul Ricard (13/14 March) will signal the start of the new season before racing gets underway at Zolder (6-8 April).

Jean-Pascal Dauce, Director of Customer Racing Programmes, Renault Sport Racing: “We are very proud to showcase the Formula Renault Eurocup alongside the Blancpain GT Series at five weekends this year.  Our full 2018 calendar includes 20 races spread over 10 weekends and will visit the most famous tracks in Europe.This will allow 30 ambitious young drivers to run in front of the stars of the sport – some of them former Formula Renault drivers themselves – and the team managers who could one day help them take the next step in their careers."