Next Tuesday and Wednesday 34 teams and 47 GT3 cars will attend the official Blancpain GT Series test days at the Paul Ricard circuit in the South of France. No less than 12 different brands will have at least one representative in Le Castellet. Exactly one month before the first race meeting in Monza the preparations for what promises to be a thrilling season have entered the final phase.

Trucks are loaded, cars polished, racing overalls packed. Teams and drivers cannot wait to end their hibernation and are ready for the first confrontation with the competition. Teams from both the Blancpain Endurance Series and the Blancpain Sprint Series will be anxious to get everything into place for the first race meetings in Monza (endurance) or Nogaro (sprint).

Will the double endurance champion and 2013 sprint champions Belgian Audi Club WRT continue their reign and conquer at least one of the Blancpain titles, and maybe be the first team to win the overall Blancpain GT Series title? Or will their challengers succeed in throwing them from their throne? How will racing and Olympic legend Alex Zanardi cope with the pressure cooker that is the Blancpain Sprint Series? And will any young talent emerge from the brand-new Blancpain Sprint Silver Cup (reserved to Silver drivers aged 25 and under) and follow in the footsteps of 21-year old Maximilian Buhk, who in his first season won races in both the Blancpain Endurance Series and FIA GT Series, including the prestigious Total 24 Hours of Spa and became the youngest ever driver champion in the Pro Cup of the Blancpain Endurance Series. The veil over the answers to those questions will be lifted soon, starting with the official test days in Le Castellet.

Two days of intense testing and driving on the French track will provide press and fans a first taste of the 2014 season in the Blancpain GT Series. On both Tuesday and Wednesday the teams have access to track between 09.00 and 13.00 in the morning, and 14.00 and 17.00 in the afternoon.

Among the 47 GT3 cars a couple of impressive newcomers: the new Bentley Continental GT3 and Camaro GT3 will get their first opportunity to measure their performances to those of the Blancpain GT Series stalwarts. And the competition will be fierce. The start of the season is only a couple of nights sleep away… 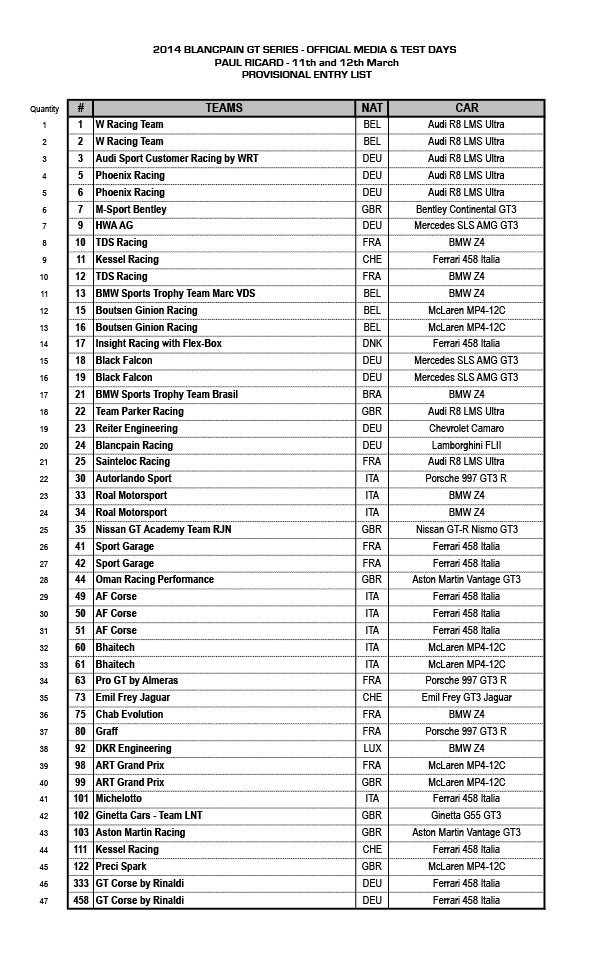