Skip to Main Content
The Circuit Paul Ricard 1000km is the fifth round of the 2016 Blancpain GT Series marking the halfway point of the championship. Even though plenty of drivers and teams use the six-hour race in the south of France as a dress rehearsal for the Total 24 Hours of Spa, the points on offer make the Circuit Paul Ricard 1000km an appointment not to be missed.

After winning the previous round of the Blancpain GT Series at Silverstone, Maxi Buhk and Dominik Baumann now enjoy a healthy lead of 13 points in the driver standings. The nearest competitor of the #84 AMG-Team HTP Motorsport pairing - who will again be joined by Jazeman Jaafar - is McLaren-stalwart Rob Bell. Bell - winner at Monza - had a rather disappointing home round at Silverstone, but together with Shane Van Gisbergen and Côme Ledogar, the Briton is determined to get a good result for the #58 Garage 59 McLaren. Those two driver trios also dominate the standings in the Blancpain GT Series Endurance Cup, with the Mercedes drivers having a 11-point lead over the McLaren drivers.

Belgian duo Fred Vervisch and Laurens Vanthoor are third in both classifications, but with 33 points up for grabs in the six-hour race, the Belgian Audi Club Team WRT-drivers could turn that situation around by claiming a win in Le Castellet.

Not that such a feat will be easy. With 27 cars in the Overall category, the top class of the Blancpain GT Series enjoys its biggest entry since the start of the season, making the Saturday evening race (start at 6 pm, finish at midnight) an even tougher challenge. Black Falcon brings the #00 Mercedes-AMG for Bernd Schneider, Yelmer Buurman and Abdulaziz Bin Turki Al Faisal. Not a trio of drivers that will be happy just making up the numbers. There is an extra HTP Motorsport Mercedes-AMG and German squad SPS automotive-performance has another three-pointed star GT3 machine on the grid as well. At the wheel of the #80 car will be German trio of Valentin Pierburg, Lance David Arnold and former FIA GT1 driver Alex Müller.

In the Pro-Am category, no matter what happens, Michal Broniszewski (#11 Kessel Racing Ferrari) will leave Le Castellet as the leader in the overall rankings. He has a 29-point lead over Giacomo Piccini, but the Italian is Broniszewski's team-mate in the Blancpain GT Series Sprint Cup and will not take the start in Le Castellet. In the Pro-Am standings of the Blancpain GT Series Endurance Cup the situation is completely different. Thanks to their hard-fought victory in Silverstone, Black Falcon-drivers Maro Engel, Miguel Toril and Oliver Morley have a small advantage (three points) over the Aston Martin-squad of Johnny Adam, Devon Modell and Ahmed Al Harthy. Michal Broniszewski - together with co-drivers Bonacini and Rizzoli - is one point further down the order.

There will be twenty one GT3 cars in the Pro-Am category at Le Castellet. Reigning Pro-Am endurance champions Duncan Cameron and Matt Griffin make their comeback after missing Silverstone, now sharing the #52 AF Corse Ferrari with Davide Rizzo. An extra Ferrari (this one a 458 Italia) is entered by French squad CMR with Sport Garage, but the most followed newcomer in Pro-Am might be Stéphane Kox, who joins Jiri Pisarik and Matteo Malucelli on the #34 Scuderia Praha Ferrari. The 22-year-old daughter of GT and Touring Car legend Peter Kox (himself at the wheel of the #4 Belgian Audi Club Team WRT R8) makes her Blancpain GT Series debut. Keep your eyes out for the #76 IMSA Performance Porsche as well. The French team has had a difficult start to the season, but are determined to do well in their home race.

In the Am category two squads are on top of the Blancpain GT Series Endurance Cup Am standings, having shared the top-two finishing spots in the two endurance races of the season: Beaubelique, Ricci and Vannelet (#87 AKKA ASP Mercedes-AMG) won in Monza, while Stef Van Campenhoudt and Pierre Ehret (#333 Rinaldi Racing Ferrari) crossed the line in first position in Silverstone. At Le Castellet, the latter will be joined by fast Russian Rinat Salikhov. It is not certain that either one of them will take the overall lead in case of a second win, for one of the drivers that lead the overall Am rankings - Belgian Stéphane Lemeret - will race in his first endurance race of the season, joining Alex Moiseev on the #49 Kaspersky Motorsport Ferrari. Together with his Blancpain GT Series Sprint Cup co-driver Claudio Sdanewitsch, Lemeret has a 23-point lead, so a top-5 finish will give him certainty of keeping the lead at the end of the French round of the Blancpain GT Series.

Stéphane Kox (#34 Scuderia Praha Ferrari): “I am so grateful and it is an honor that Scuderia Praha gives me this opportunity. We’ve had two very productive test days, and the cooperation with the team went very well. To be racing at the highest level in GT sport is a real challenge. Nevertheless I’m confident that we can deliver a very strong job next weekend. I’ve known Scuderia Praha since I was about 11 years old. At that time I came to support my father. Now, 11 years later I will drive their Ferrari myself! This is such a special feeling.”

Franck Rava (Technical Director #76 IMSA Performance Porsche): "We have recently completed a test session at Spa, which helped us in improving our understanding of the Porsche. We have a lot of experience in these long and difficult races, during which a team has to control multiple parametres and during which conditions change all the time. We simply adore those races, because a good strategy is essential and often makes a fundamental difference."

Ezequiel Pérez-Companc (#90 AF Corse Ferrari): "I am really looking forward to Le Castellet and Spa, in particular because there is night racing. Racing in the 24 hours of Spa in the Pro category is a dream I have had since I was a kid. I want to be as much prepared as possible, in order to give my best and help the team get a good result in the Pro category. So we will try our hardest in Le Castellet as well." 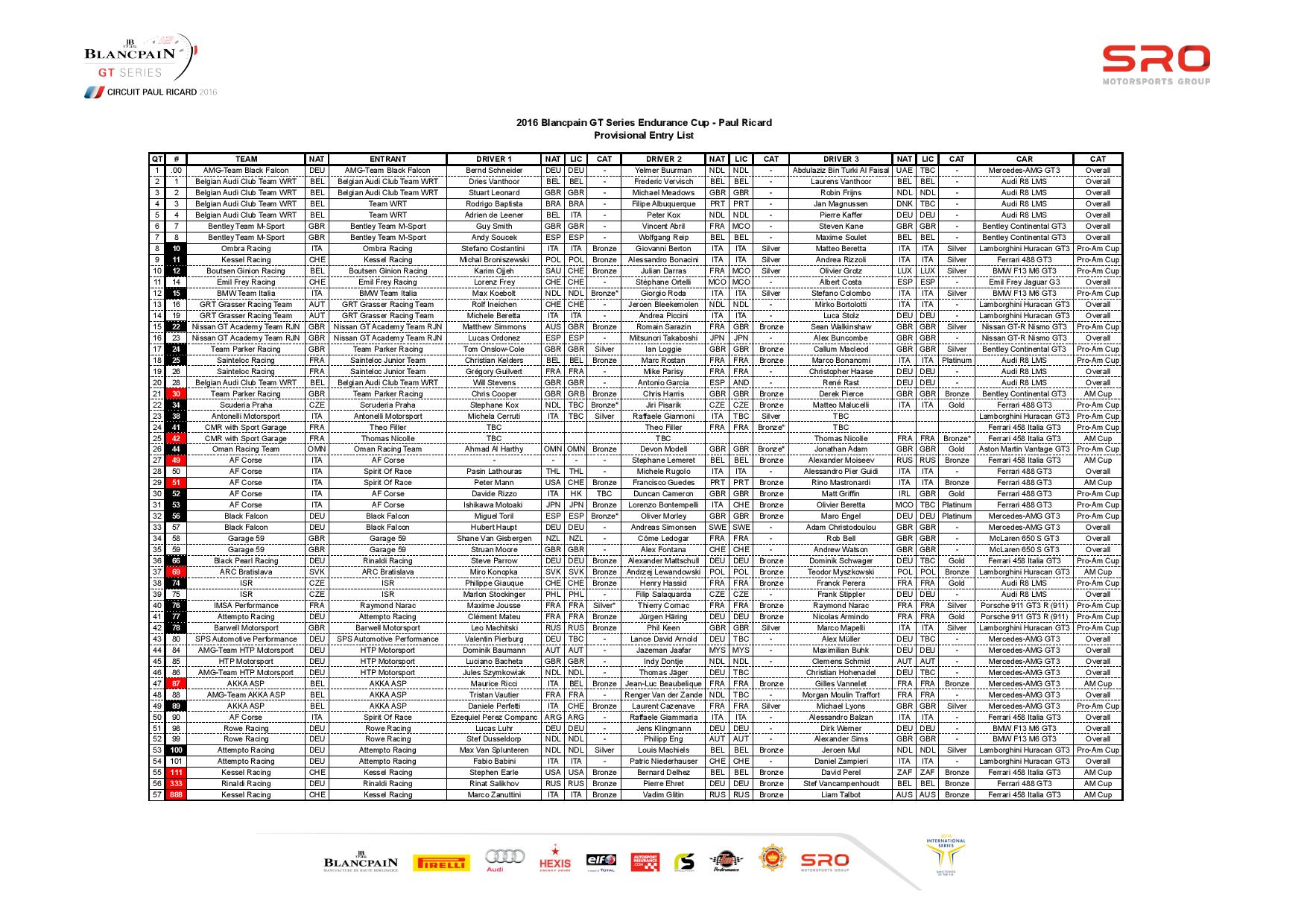