It’s an all-Ferrari front row for the opening round of the 2015 Blancpain Endurance Series at Monza. Pro-Am driver Norbert Siedler put the #333 Rinaldi Racing Ferrari on pole, with Pierre Kaffer in the #66 Black Pearl Racing by Rinaldi Ferrari alongside. Fabio Babini gave the new Lamborghini Huracan a splendid premiere, by taking the Pro Cup pole in the #19 GRT Grasser Racing Team machine. Monza rookie Liam Talbot took pole in the Am Cup, at the wheel of the #111 Kessel Racing Ferrari.

Another splendid spring day greeted the drivers and teams for the first qualifying session of the 2015 Blancpain Endurance Series. The first two parts of qualifying saw good lap times of both the new Audi and the two new Lamborghini Huracan, which were all in the top-5 at a certain point. At the end of Q2, Lamborghini-driver Fabio Babini had set the fastest time of them all.

As expected, the third part proved to be decisive, especially when the professional drivers in the Pro-Am Cup pushed their cars up the overall rankings. With the #66 Black Pearl Racing by Rinaldi Ferrari Pierre Kaffer was the first to beat Babini’s time, soon afterwards Norbert Siedler did the same. With a second effort the Austrian put the #333 Rinaldi Racing Ferrari on pole. When the dust had settled, seven Pro-Am cars were in the top-8, six of them being a Ferrari 458 Italia. The only other cars on the first four rows of the grid are Babini’s Lamborghini and the #32 Leonard Motorsport AMR Aston Martin, with which Michael Meadows set the fifth time overall.

Am Cup was dominated by Ferrari-drivers as well, occupying the first three starting positions. Pole (and 35th overall) went to the man who had to travel the farthest to get to Monza, Australian Liam Talbot. The fact that he never raced on the Italian track before did not stop him and his #111 Kessel Racing Ferrari to be two tenths of a second quicker than Rino Mastronardi in the #25 Glorax Racing Ferrari.

The three-hour race in Monza starts at 14:30 CET, and can be watched live on the official website blancpain-gt-series.com/live 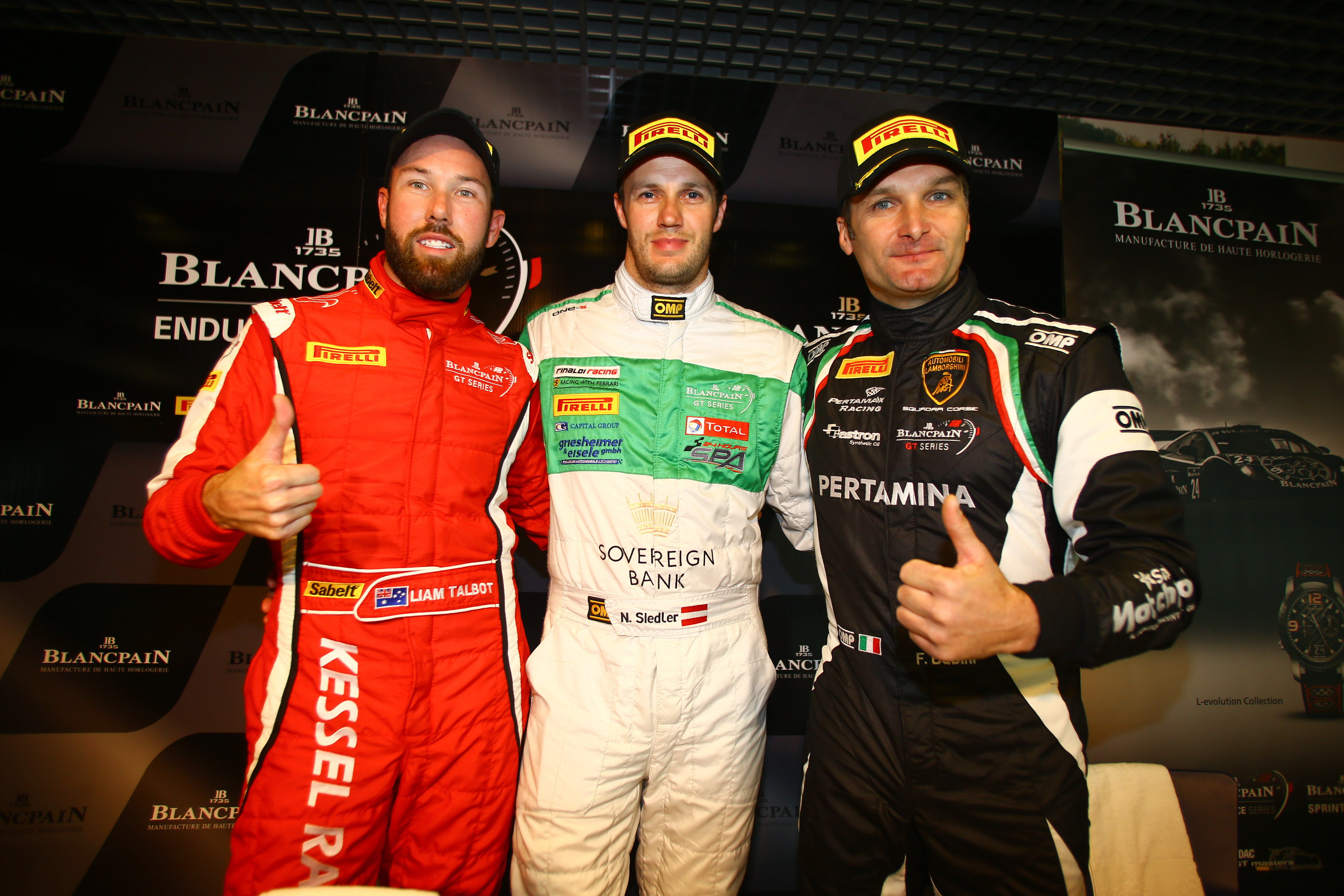 Norbert Siedler (#333 Rinaldi Racing Ferrari): “We had a difficult weekend in Nogaro for the opening round of the Blancpain Sprint Series, but Monza suits our car much better. I did need a second try to set the pole, because of traffic during my first effort. It is good to start the race from pole, but we will focus on winning the Pro-Am category. Going for an overall podium might be out of our league.”

Fabio Babini (#19 GRT Grasser Racing Team Lamborghini): “I have to congratulate the Grasser team to build such a good car in such a short time. We still have to discuss tactics for the race, but the fact that there are several Pro-Am cars in between us and the next Pro Cup car might be an advantage in the first part of the race."

Liam Talbot (#111 Kessel Racing Ferrari): “I feel like somebody is going to pinch me and I won’t feel any pain because I am dreaming. I did not get an ideal lap together, so I was very surprised that I took pole, especially since I have never raced on Monza before.”