Skip to Main Content
Stéphane Ortelli and Stéphane Richelmi took the win in the Qualifying Race of the opening event of the 2015 Blancpain Sprint Series in Nogaro. The #3 Belgian Audi Club Team WRT Audi led almost all the race, even though Maxime Martin and Dirk Müller in the #77 BMW Sports Trophy Team Brasil BMW were never far away and kept the Monegasque drivers under pressure. Third was another Belgian Audi Club Team WRT-duo, Enzo Ide and Christopher Mies. The win in Pro-Am went to the drivers of the #70 GT Russian Team Mercedes, Alexey Karachev and Bernd Schneider, after the German took the lead and 5th overall in the second part of the race. The Fjordbach brothers were quickest in the Silver Cup, driving the #74 ISR Audi.

This meant that the #3 Belgian Audi Club Team WRT Audi of Ortelli and the #77 BMW Sports Trophy Team Brasil BMW of Dirk Müller were able to build up an important lead early on, with the #4 Audi of Frank Stippler in fourth. Ortelli managed to open up the gap from the yellow BMW, and when the leading duo began hitting some backmarkers, Müller decided to take his mandatory pitstop and pass the car to Maxime Martin.

The BMW Sports Trophy Team Brasil crew did a splendid job on the pitstop and once Ortelli had passed the wheel of the Audi to Stéphane Richelmi, their lead was reduced to less than two seconds. What followed was textbook chasing by Martin, which was matched by exemplary defending by Richelmi. Even a safety car intervention to recover the #88 Reiter Engineering Lamborghini could not disconcert the 25-year-old from Monaco and he held on to the lead until the end.

A slow puncture on James Nash’s car meant the #4 Belgian Audi Club Team WRT Audi dropped down the order, leaving Rob Bell in the #55 Attempto Racing McLaren in third, until he hit trouble as well. Christopher Mies in the #2 Belgian Audi Club Team WRT Audi was the next driver to occupy that third position, catching up with the leaders during the safety car period. However, problems when lapping a backmarker prevented him from challenging Martin and Richelmi.

Behind the podium finishers, Marco Seefried and Norbert Siedler brought the #333 Rinaldi Racing Ferrari home in fourth, having started the race from 13th. Alexei Karachev and Bernd Schneider produced an even more impressive comeback, climbing from 18th on the grid to 5th at the finish line. At the wheel of the #70 GT Russian Team Mercedes the Russian-German duo took the win in the Pro Am Cup as well, and will share the third row of the starting grid for the Main Race with the #75 ISR Audi.

In Silver Cup Thomas and Anders Fjordbach had little trouble taking the win, but their seventh place overall might produce an opportunity for an even better result tomorrow.

The first main race of the season will start at 13:10 CET on Easter Monday.

Stéphane Richelmi (#3 Belgian Audi Club Team WRT): “I was a bit nervous before the start of my stint, but I have a great team-mate and with a seven second lead I could relax a bit. I tried to manage the tyres until the end, which was not easy with Maxime right behind me. The intervention of the safety car did not help either. I hope we can continue like this in the Main Race.”

Dirk Müller (#77 BMW Sports Trophy Team Brasil BMW): “The level in the Blancpain Sprint Series is very high, and I had a very steep learning curve to adapt to these sprint races and the tyre use. We made a tactical choice in pitting a bit early and I think that was the right decision. We will now try to adapt the car even more to this track and try to win the race tomorrow.”

Enzo Ide (#2 Belgian Audi Club Team WRT): “I was at a complete standstill in the opening lap, when the cars in front of me blocked the track. That made us lose a lot of time and afterwards I limited myself to completing my stint and to try and give the car in a good shape to Christopher. He did an excellent job in the second half of the race, a clear proof that we have the speed. That opens up possibilities for the Main Race.”

Anders Fjordbach (#74 ISR Audi): “I was really lucky in the opening lap, when I managed to avoid the cars in trouble and climb from 16th to 6th. Afterwards I managed to find my rhythm quite quickly and could hold on to my position for most of my stint. Our race pace is pretty good.”

Bernd Schneider (#70 GT Russian Team Mercedes): “The Mercedes is not really the ideal car for this circuit, but for us the most important thing is to gather experience, since the team is pretty new to this. For the main race we still have two new sets of tyres, and that will be crucial, I think.” 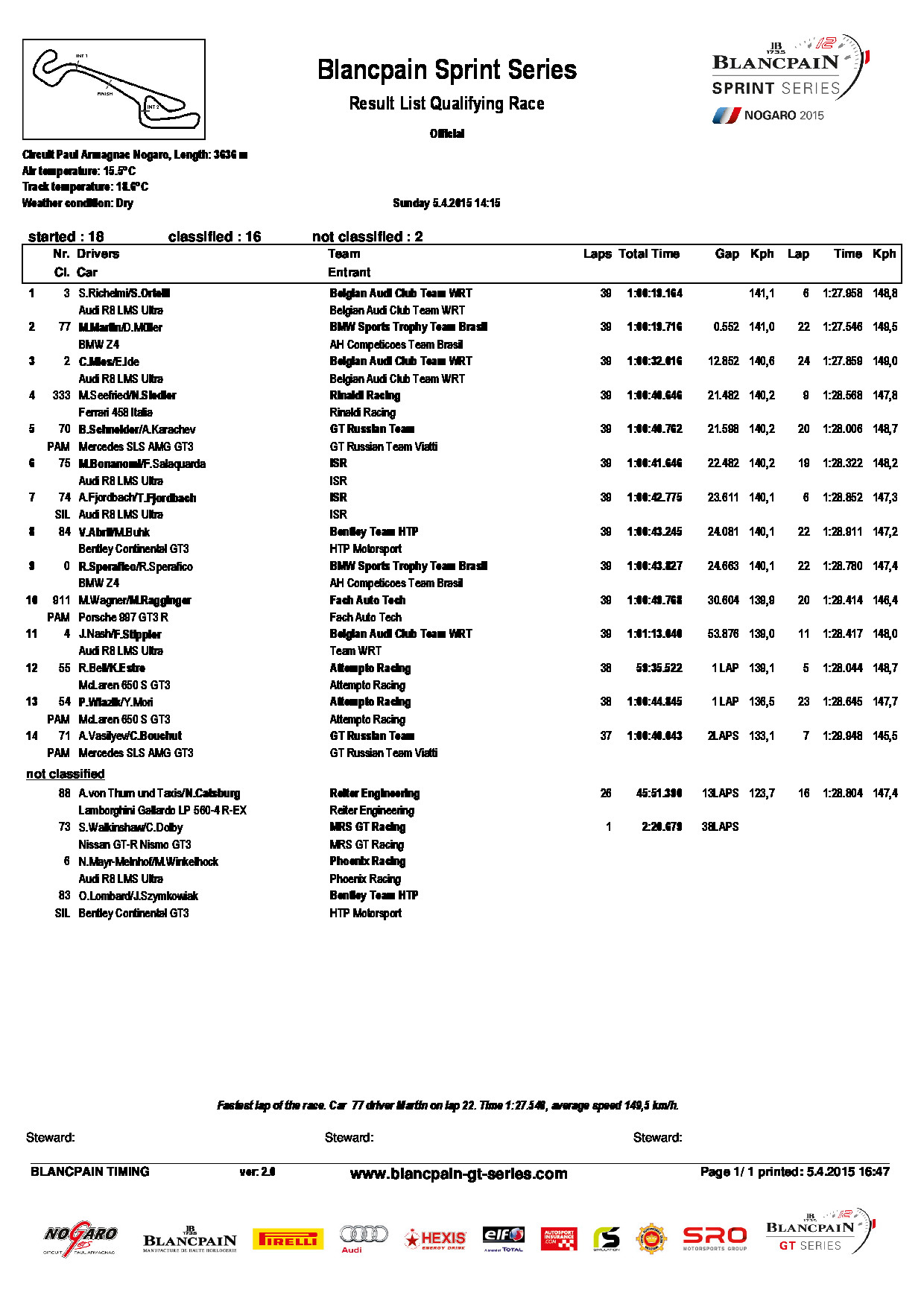