Just over three weeks before the Total 24 Hours of Spa, most teams participating in the highlight of the 2014 Blancpain Endurance Series have finalised their line-ups. The regular top notch drivers of the Series get the company of former F1 drivers and winners of the Le Mans 24 hours.

No fewer than 60 cars – representing 11 prestigious car manufacturers – are entered for the 90th anniversary edition of the Total 24 Hours of Spa. And that number might even increase, with a couple of teams such as NovaRacing (Nissan) and Brussels Racing (Aston Martin) still working on their entries as we speak. Victory in the biggest endurance race exclusively reserved for GT3-cars is coveted by Blancpain Endurance Series regulars and other GT-specialists alike.

Pro Cup: Extra cars to compete against the Series’ leaders

Pro Cup colleagues Belgian Audi Club Team WRT enter a third car in the category as well. The #2 R8 LMS ultra will have the illustrious trio of Lotterer-Fässler-Tréluyer at the wheel. The Audi trio has won the Le Mans 24 hours three times, at the wheel of a prototype of the German manufacturer. Obviously they are aiming to join the very select group of drivers that have won the French and Belgian endurance classics in the same year (only Luigi Chinetti in 1949 and Romain Dumas in 2010 have accomplished this feat) but their task will not be easy. Series regulars ART Grand Prix – leading the Pro Cup team standings – and M-Sport Bentley – winners of the last two races of the current season – will want to continue their streak of podium finishes, especially since the points tally of the Total 24 Hours of Spa is twice that of a regular race Blancpain Endurance Race. A fact that the squad of the Sainteloc Racing Audi, third in both driver and team standings, will keep in the back of their minds as well.

The reigning team champions in the Blancpain Endurance Series Pro Cup, BMW Sports Trophy Team Marc VDS, will not have to worry about scoring points, since the Total 24 Hours of Spa is the only round of the Series they will enter this year. The Belgian squad will try to erase the memories of a disappointing 24 hours of the Nürburgring and can count on the services of five official drivers from BMW Motorsport.

Pro-Am Cup: Half the field

The fight for the win in the Pro-Am Cup could become the most fearsome on the Circuit de Francorchamps. No fewer than 31 cars are entered in this category, where professionals, young rising stars and gifted gentleman drivers combine their talents to aim for glory. Some of them are not only chasing the laurels in the Pro-Am category, but might will be among the overall frontrunners as well, as last week’s Le Castellet Pro-Am winners Nick Catsburg and Henry Hassid showed when finishing only a handful of seconds off the overall podium.

The most striking entry in the Pro-Am Cup is the impressive AF Corse delegation. The Italian squad enters no less than four cars. The Prancing Horse is the best represented manufacturer in the category by a long way – there are 13 Ferrari 458 in Pro-Am – but other brands get a serious boost as well. The Aston Martin of MP Motorsport will get the company of two other Aston Martin Racing supported Vantage GT3, cars entered by Beechdean and Leonard Motorsport. One of the drivers on the latter will be former Grand Prix-driver Pedro Lamy.
The sole Lamborghini of the Total 24 Hours of Spa is entered by the Australian Pro-Am squad Lago Racing. The All-Australian quartet consists of Roger Lago, David Russell, Steven Richards and Steven Owen. The most recent Australian team taking on the daunting challenge of the Total 24 Hours of Spa was Juniper Racing in 2008.

Gentlemen Trophy: Who can beat GT Corse by Rinaldi?

On each of the first three rounds of the 2014 Blancpain Endurance Series the drivers standing on the top step of the Gentlemen Trophy podium were driving the #458 GT Corse by Rinaldi Ferrari 458. Alexander Matschull and Frank Schmickler, twice joined by Pierre Ehret, are of course aiming to make it four in a row in Spa, but the competition will be stronger than ever.

AF Corse have two cars in the Gentlemen Trophy as well – bringing their grand total to six cars – and during the first three rounds of the 2014 Blancpain Endurance Series they have proven to be very quick, with Portuguese driver Francisco Guedes taking pole in the category on each occasion.

Local favourites Belgian Audi Club Team WRT have added a double Total 24 Hours of Spa-winner to their line-up. Fred Bouvy took the overall win in the Belgian classic in 1999 and 2000, the last two years of the touring car era. Since then Bouvy has added a third place to his tally, sharing the PK Carsport Corvette in 2007.

Stephane Ratel (CEO and founder SRO Motorsports Group): “I am very happy to see the enthusiasm of so many teams for the highlight of the 2014 Blancpain Endurance Series. Year after year, the Total 24 Hours of Spa has proved its status as the pinnacle of global GT competition. The field for the 90th anniversary edition of the great race will be an accurate reflection of the progress enjoyed by the Blancpain Endurance Series, which has delivered three outstanding races so far this season. Furthermore, there are quite a number of factory supported drivers distributed between a good selection of top quality teams to create some truly epic fights at the front of the field. These battles have established the Blancpain Endurance Series as the strongest GT-specific series in the world. The 2014 edition of the Total 24 Hours of Spa looks set to be a classic.” 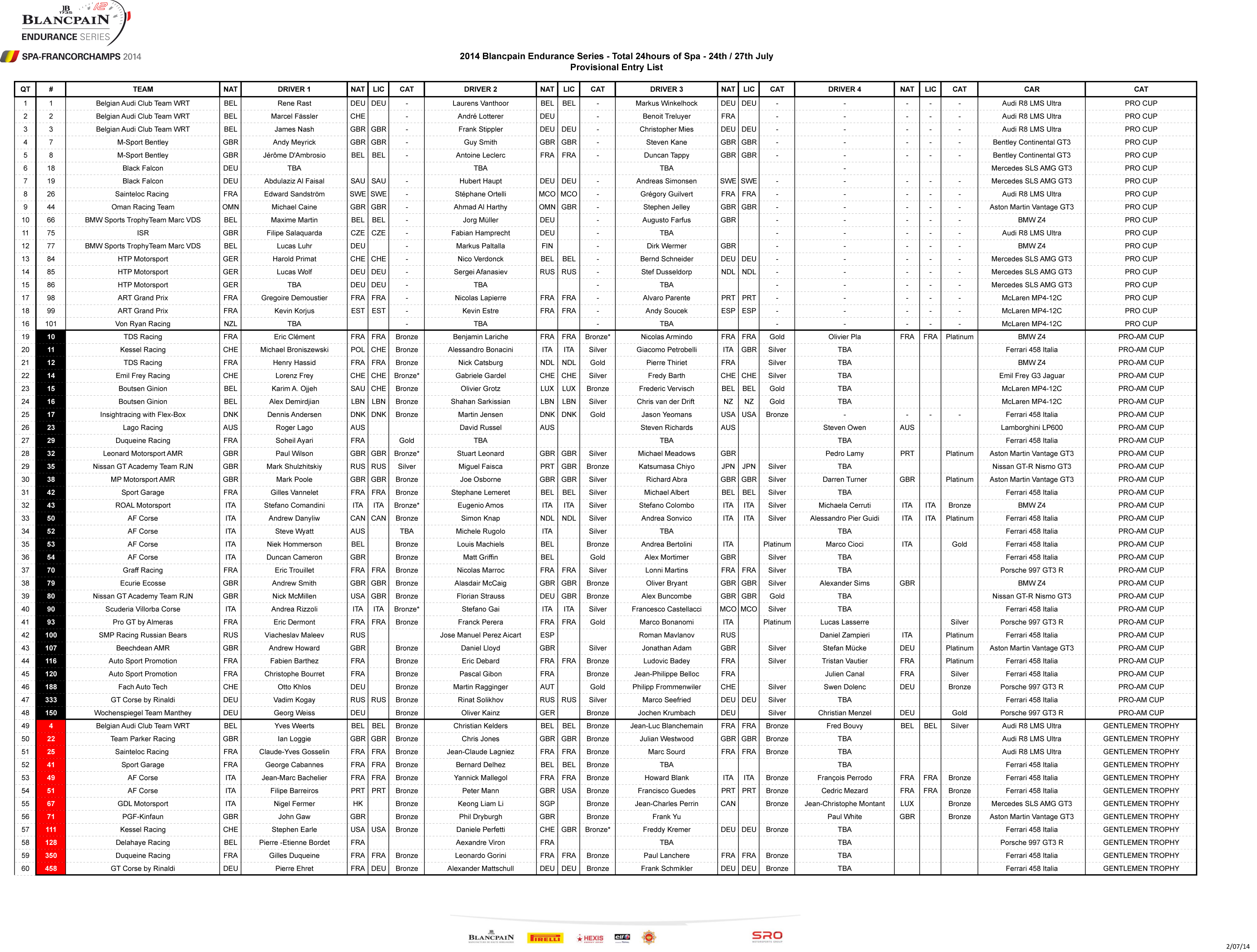 Over 275 years of tradition in motion: