The season-deciding three-hour race was won by Dinamic Motorsport with its #54 Porsche line-up of Klaus Bachler, Matteo Cairoli and Alessio Picariello after a three-car battle at the front that also featured the #71 Ferrari and the #63 Emil Frey Racing Lamborghini.

This ensured that the destination of the championship fluctuated throughout the race, with Akkodis enjoying little control over its own destiny. Instead, it was left to rely on one of its rivals beating the pole-sitting Iron Lynx car. If the Italian squad won, the #88 Mercedes-AMG of Raffaele Marciello, Jules Gounon and Dani Juncadella needed to finish second to capture the crown, but they did not have the pace to fight for the podium.

The Ferrari, on the other hand, was blisteringly fast during the early stages. Making his first appearance of the season, two-time Endurance Cup champion Alessandro Pier Guidi showed his class with a rapid first stint, pulling eight seconds clear of Jack Aitken in the #63 Lamborghini by the time the pit window opened. The Akkodis ASP machine of Juncadella enjoyed a good start to vault from eighth to sixth, but the local driver made no further progress before the stint was complete.

Alessio Rovera took over the #71 Ferrari for the second hour but could not match the pace of his teammate. Indeed, the Italian came under increasing pressure from the #63 Lamborghini, now in the hands of Albert Costa. The Spanish ace chipped away at an eight-second lead and, with some help from lapped traffic, was on the rear of the Ferrari with 20 minutes left in the second hour. 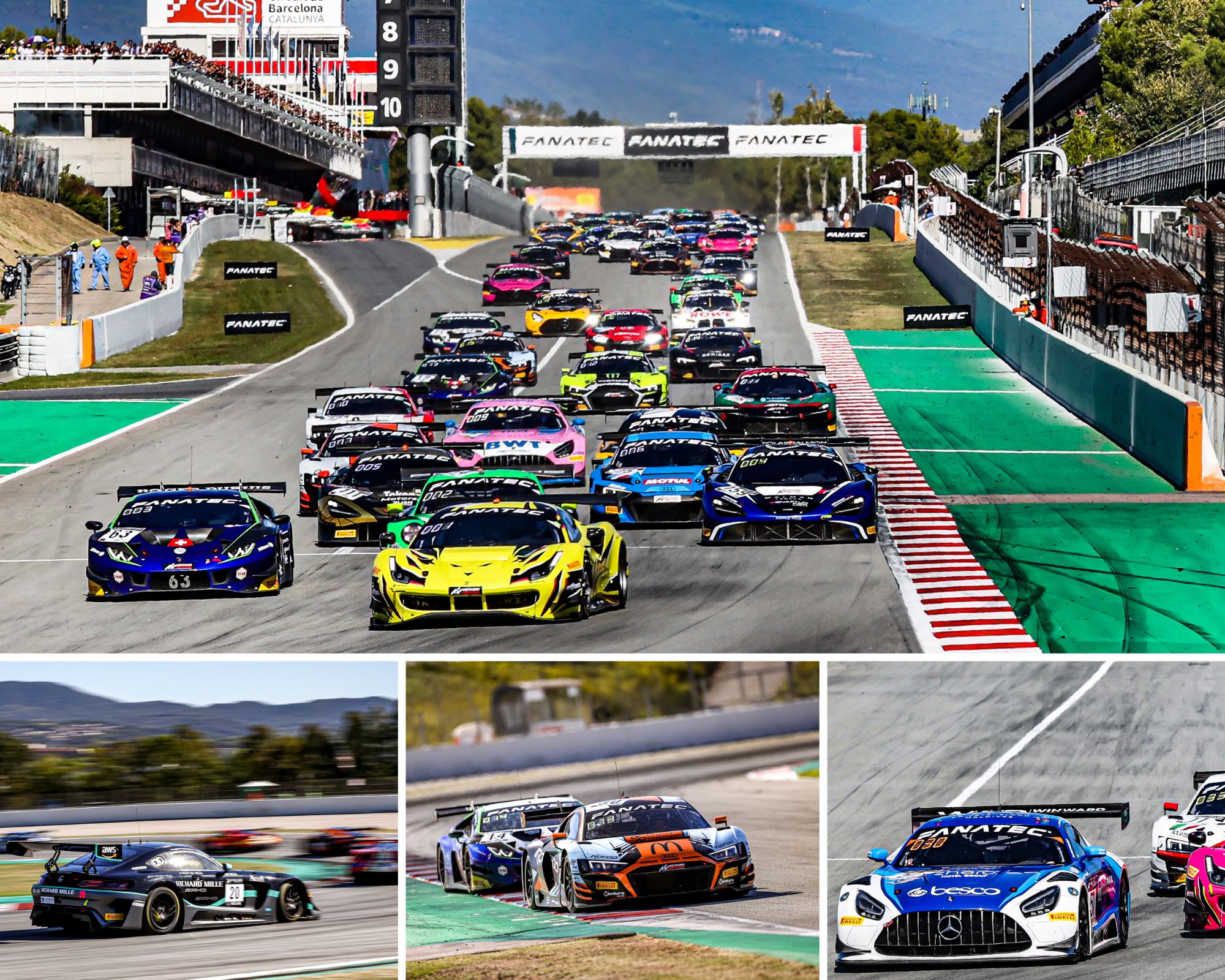 Rovera defended firmly for several laps, but the Lamborghini finally made it past in the dying moments of the stint, going three-wide down the pit straight as the leaders moved through traffic. It put Akkodis back in control of the title battle, but this situation didn't last long: on the next lap the leading duo stopped and it was the Ferrari that emerged in front, seemingly handing the championship advantage back to Iron Lynx.

Then, in yet another twist, the Dinamic Porsche came into view on the start-finish straight. Having run a close third during the second hour the #54 machine stopped early, made the undercut work and blasted past and into the lead with an hour left on the clock. Once again the title was heading to Akkodis ASP, the #88 having climbed to fifth during the second hour with Gounon at the wheel, while Marciello took over for the run to the finish.

The championship was still some way from being secure and, with 40 minutes remaining, a safety car was deployed to remove the #83 Iron Dames Ferrari. The Gold Cup leader had been heading toward a historic class championship, but a gearbox failure with barely half an hour to go forced Rahel Frey to stop the car on-track. Back in the pits, her teammates Sarah Bovy and Michelle Gatting were inconsolable.

This put the Iron Lynx Ferrari on the rear of the Porsche. Finishing driver Antonio Fuoco, the only member of the #71 crew able to take the title, now had just one objective: re-take the race lead and snatch the championship. The safety car departed with 30 minutes left on the clock, but it was Dinamic man Cairoli who got the better start and edged into a slender 1.5 second lead. Further back, Marciello was under pressure from Frédéric Vervisch (#46 Team WRT Audi), generating further tension for the French squad.

Cairoli appeared to be in the clear, but a small mistake at the end of the penultimate lap gave Fuoco hope. The Italian posted the fastest final sector of the race and was barely half a second off the lead as the final tour began. It was in vain, however, as the #54 Porsche took the chequered flag ahead of the #71 Ferrari with the #63 Lamborghini completing the podium.

Team WRT signed off its partnership with Audi by finishing fourth with the #32 machine, followed by Marciello. The #88 Mercedes-AMG took the flag in fifth to add the overall Fanatec GT Endurance teams' and drivers' titles to the victory Akkodis ASP secured at this year's TotalEnergies 24 Hours of Spa. Akkodis ASP also wrapped up the overall teams' championship, making 2022 the most successful its history.

Having already secured the Silver Cup Endurance titles at Hockenheim, Team WRT finished with a flourish by adding the overall teams' crown thanks to a victory for its #30 Audi of Thomas Neubauer, Benjamin Goethe and Jean-Baptiste Simmenauer. Neubauer passed the #159 Garage 59 McLaren during the final hour, the British squad having led for the entirety of the race before ultimately settling for second.

The Gold Cup race may have been the most dramatic contest in any class this season. Iron Dames were well on the way to the title when the gearbox of the #83 Ferrari gave out. This handed the advantage to the #7 Inception Racing McLaren, but a puncture during the final 30 minutes threw everything into doubt once again. The car ran eighth, enough to secure the championship by a point, until the leading #911 Herberth Motorsport Porsche spun during the closing laps, effectively securing the crown for the crew of Brendan Iribe, Ollie Millroy and Frederik Schandorff

As if that wasn't enough, the race was decided by a final-lap collision between two Mercedes-AMG runners. This left Arjun Maini (#5 Haupt Racing Team) in the gravel, while Lucas Auer (#57 Winward Racing) went on to take the chequered flag. The #112 JP Motorsport McLaren was second, followed by the #33 Team WRT Audi.

Pro-Am championship honours were split three ways. SPS Automotive Performance clinched victory in today's race with its #20 Mercedes-AMG of Valentin Pierburg, Ian Loggie and Dominik Baumann, which was enough to earn the Endurance Cup teams' title. The Endurance drivers' crown went to the #52 AF Corse Ferrari crew of Louis Machiels, Andrea Bertolini and Stefano Costantini, who finished third on the road after a puncture during the first hour. The overall Pro-Am drivers' title belongs to Miguel Ramos (#188 Garage 59 McLaren), who also picked up the Fanatec GT Sprint championship earlier this month at Valencia.

Today's race brought the curtain down on the 2022 Fanatec GT World Challenge Europe Powered by AWS season, completing a campaign that began six months ago at Imola. With a quartet of titles and its first TotalEnergies 24 Hours of Spa win in the bag, Akkodis ASP can reflect on landmark campaign. For their rivals, the work of toppling the dominant French squad starts now. 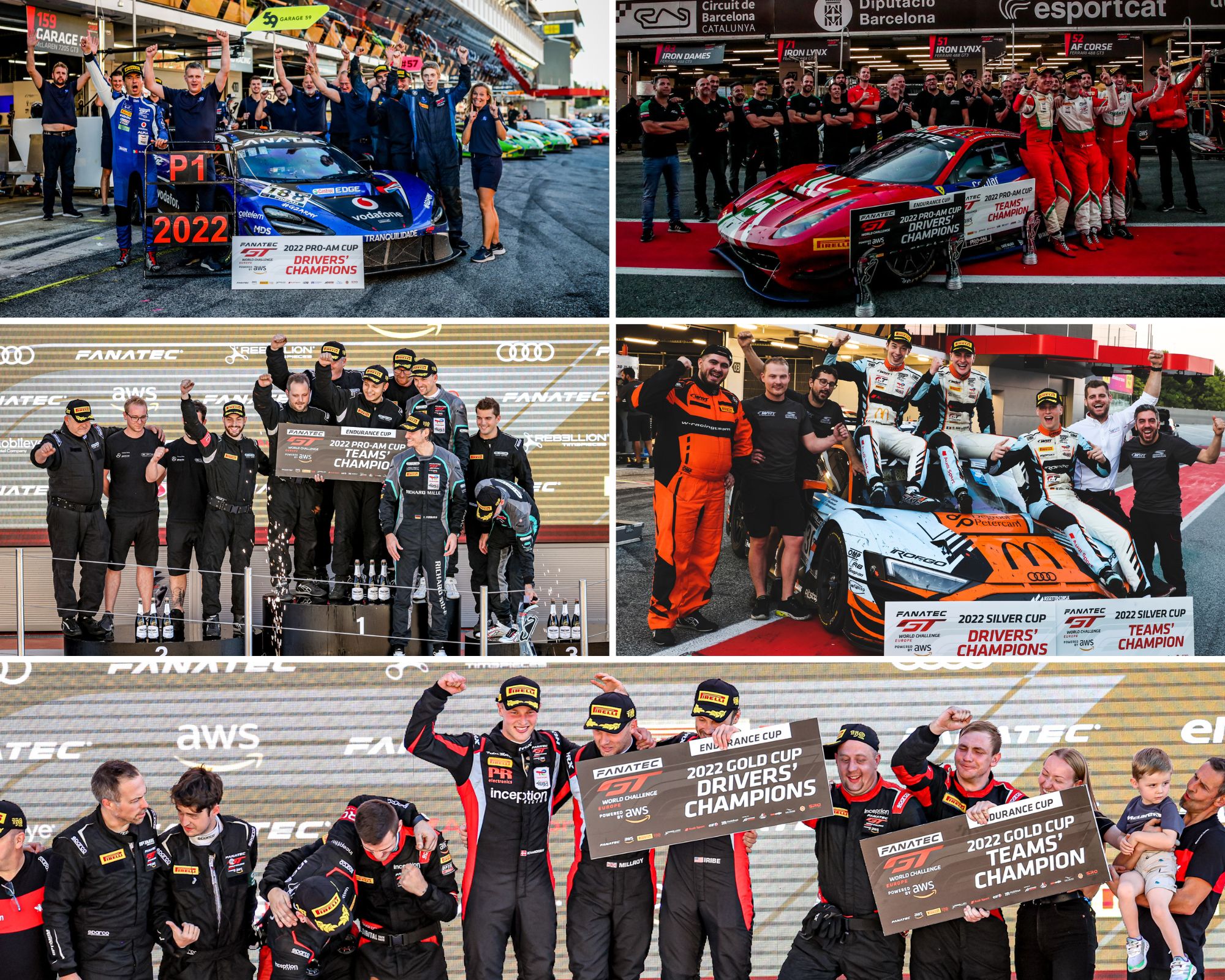