Dries Vanthoor and Charles Weerts are celebrating a third successive Fanatec GT Sprint drivers' title after the #32 Team WRT Audi duo finished P3 in Saturday's race at Valencia, which was won by the #52 AF Corse Ferrari of Ulysse De Pauw and Pierre-Alexandre Jean.

The Pro-Am drivers' title was also decided in favour of Miguel Ramos and Dean MacDonald, despite the #188 Garage 59 McLaren coming home fourth in class. The #111 JP Motorsport McLaren of Patryk Krupinski and Christian Klien won on the road, but it was not enough to deprive the British squad of championship glory with a race to spare.

Having secured the Silver Cup crown last time out at Misano, the #52 Ferrari started the penultimate Fanatec GT Sprint contest of 2022 from overall pole. De Pauw was unchallenged when the action got underway, while second-place starter Weerts looked set to be swallowed by the pack. In fact he slipped back by just one position, dropping behind the #11 Tresor by Car Collection Audi driven by Simon Gachet, on what was an eventful opening tour.

Down the order, Weerts and Vanthoor's only championship threat was struggling. Timur Boguslavskiy took the start in 19th at the wheel of the #89 Akkodis ASP Mercedes-AMG and made limited progress early on, though he did well to avoid further problems as 26 cars fought for space. There was only one incident of note, with contact sending the #54 Dinamic Motorsport Porsche into the barriers and out of the race.

When the green flag flew De Pauw quickly began to establish an advantage at the head of the order, while Weerts pressured Gachet but could not make a move. The Belgian had no need to take a risk, with P3 more than enough to secure the crown while the #89 Akkodis ASP car remained down the order.

When the pit window opened Tresor by Car Collection was the first team to blink, calling Gachet in one lap earlier than his rivals. The Italian squad performed a lightning-fast stop, which ensured that Christopher Haase stayed ahead of the #32 Audi and closed up on the #53 Ferrari when both pitted on the next lap. Vanthoor climbed aboard the former, while Jean took the controls of the leading car.

With the #32 Audi settled in third, the story now was about what Akkodis ASP could do. Raffaele Marciello emerged from the pits in 11th spot, five places short of where he needed to be to keep the championship alive until the final day. The field was bunched up with 20 minutes remaining to clear the stranded #90 Madpanda Motorsports Mercedes-AMG, which had suffered a technical failure and hit the barriers.

When racing resumed Marciello had 15 minutes to perform a minor miracle. He gained one place when the sister #88 Akkodis ASP Mercedes-AMG found itself in the gravel, but could do nothing about the #25 Saintéloc Junior Team Audi driven by Patric Niederhauser. Marciello could not afford a risky move, with yet another Audi – the #33 Team WRT entry of Chris Mies – filling his mirrors. 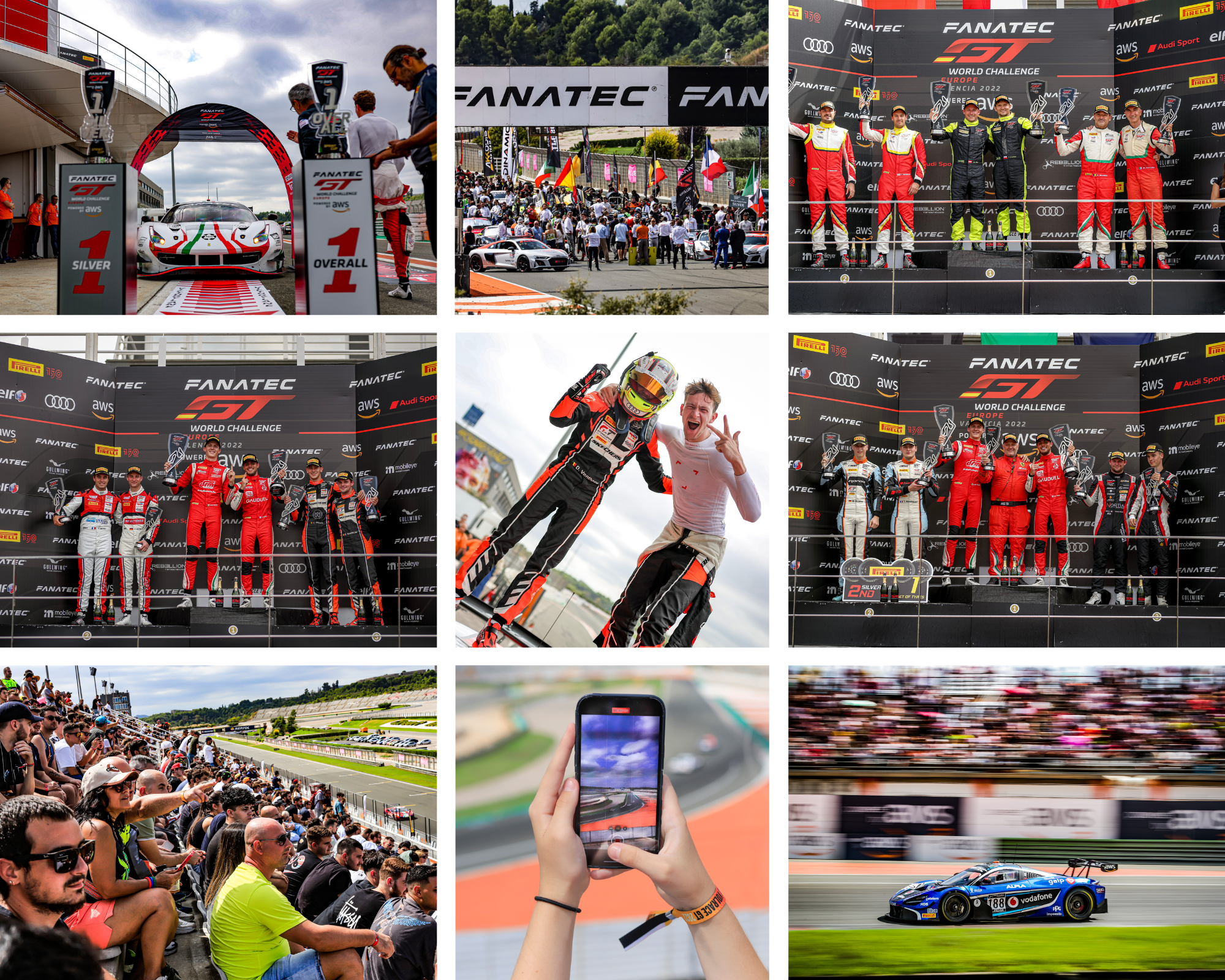 Marciello finally made it past Niederhauser with less than five minutes left, the pair running side-by-side for several corners before the Mercedes-AMG finally completed the move into turn 11. That promoted him to ninth, which became eighth the next time around when Thomas Drouet moved the sister #87 Akkodis ASP entry aside to aide his teammate's charge.

But it was not enough to prevent Team WRT from wrapping up a third straight drivers' title with the unstoppable combination of Vanthoor and Weerts. Jean took the chequered flag to seal a second overall win of the season for the #53 Ferrari, followed by Haase and then championship winner Vanthoor.

On a stellar day for Audi, three more R8 runners completed the top-six. The #30 Team WRT machine was fourth and second in the Silver Cup classification, followed by the #66 Attempto Racing entry and Tresor by Car Collection's #12 crew. The #112 JP Motorsport McLaren crossed the line in seventh, but a post-race penalty sent it tumbling down the order and promoted Marciello up a further spot.

Indeed, the #89 Akkodis ASP crew finished just one place short of keeping the title alive, though Marciello can take consolation from the fact that he has a chance to clinch the combined Fanatec GT World Challenge Europe Powered by AWS drivers' championship tomorrow afternoon. The overall Fanatec GT Sprint teams' championship is also yet to be settled, with Akkodis ASP just a few points shy of WRT heading into tomorrow's decider.

The Pro-Am drivers' crown was put to bed in today's contest as the Garage 59 pairing of Ramos and MacDonald did just enough to seal their class championship. A late-race collision with the #52 AF Corse Ferrari left the #188 McLaren crew fourth at the chequered flag, but having built up a sizeable advantage ahead of the deciding weekend they can now afford to celebrate.

JP Motorsport took the win with its #111 McLaren of Krupinski and Klien, beating the pole-sitting #21 AF Corse Ferrari of Hugo Delacour and Cedric Sbirrazzuoli. The team's championship remains up for grabs in tomorrow's finale, with AF Corse leading Garage 59 ahead of the decider.

Qualifying for tomorrow's season-closing Fanatec GT Sprint contest at Valencia will get underway at 09:00 CEST, while the race is scheduled to go green at 14:00. Live coverage will be available to watch with English, German, French and Italian commentary on the GTWorld YouTube channel.