The annual trip to Kent is always among the most eagerly anticipated events of the season, and this year’s edition certainly didn't disappoint. A record crowd packed the venue on Saturday and Sunday, with many wearing the colours of Valentino Rossi as the Italian made his debut in the short-format championship.

The fans had something to cheer about thanks to Rossi’s promising run to eighth place in race 2, while the crowd also witnessed Ferrari’s first Sprint Cup win since 2015 and a masterclass from one of the most gifted GT drivers on the planet. These are the stories and stats from this season’s Sprint Cup opener.

In Sunday's opening race, 20-year-old Ulysse De Pauw and 21-year-old Pierre-Alexandre Jean took victory with a mature performance that belied their youth. While the #53 AF Corse Ferrari was among the favourites for Silver Cup honours, few saw this kind of performance coming, even after De Pauw had taken overall pole on Saturday evening.

De Pauw and Jean are only the fourth Silver crew to score an overall victory in 102 Sprint Cup races. They follow in the footsteps of Bastian/Neubauer (Brands Hatch 2019), Gachet/Palette (Magny-Cours 2020) and Feller/Fontana (Zandvoort 2021). Significantly, these crews all went on to claim the class title.

Sunday’s win also gave Ferrari its first Sprint Cup triumph since Misano in 2015. On that occasion, Norbert Siedler and Marco Seefried won at the wheel of a Rinaldi Racing-run 458 GT3. It was also a first overall Sprint Cup victory for the highly decorated AF Corse squad.

Akkodis ASP won its first Sprint Cup contest since the final event of the 2020 season thanks to a commanding race 2 performance from Raffaele Marciello and Timur Boguslavskiy. This was a richly deserved result for the pair, who lost near-certain wins at Zandvoort and Brands Hatch last year to technical problems. 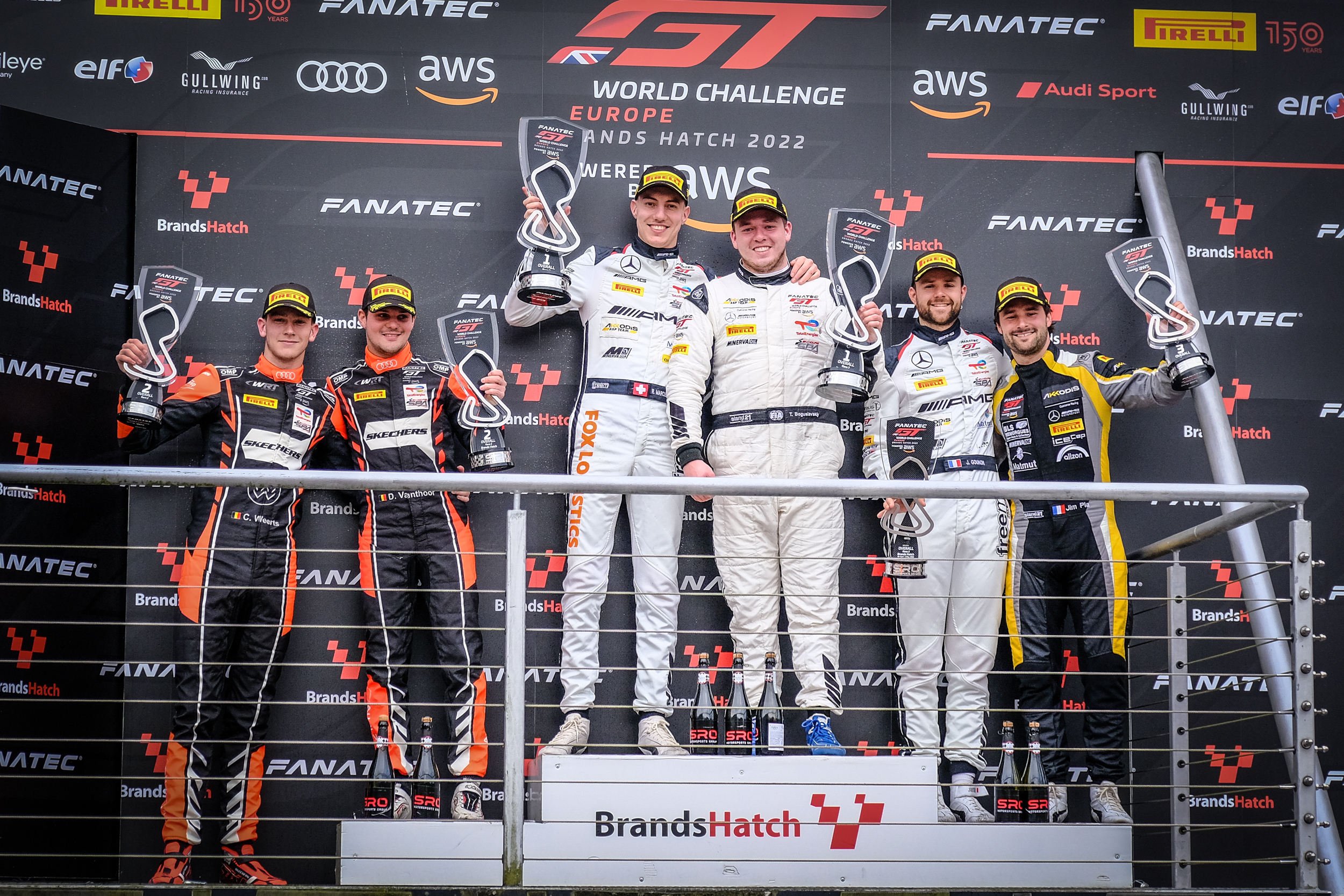 Marciello was at his absolute best throughout the Brands Hatch weekend. The Swiss driver paced free practice and pre-qualifying, then broke the series lap record on his way to pole and posted the fastest racing lap in both 60-minute contests. Indeed, Marciello was quickest in every session he contested at Brands.

Boguslavskiy also delivered one of his most complete weekends. Fourth in Q1 was a strong result, though he believed pole was possible with a clean lap, while his pace during the second half of race 2 was more than a match for reigning champion Charles Weerts.

The #32 Team WRT Audi bagged a pair of runner-up finishes, building a solid foundation for an expected title assault from Weerts and Dries Vanthoor. Though a fraction off the #89 Akkodis ASP crew’s pace at Brands, the Belgians will certainly be in the mix for a third successive Sprint Cup crown.

As ever they were helped by the swift pit stops for which Team WRT is famous. The #32 crew performed the best at Brands Hatch, picking up the Pit Stop Challenge award for the event.

A regular winner in the Silver Cup and Pro-Am classes, Jim Pla clinched his maiden overall podium thanks to a third-place finish in race 2. It was not a perfect weekend, however, with both Pla and teammate Jules Gounon convinced they would have won the opening contest were it not for a slow pit stop.

Gounon is set to miss the upcoming Sprint Cup race at Magny-Cours (13-15 May) to contest the LiquiMoly Bathurst 12 Hour. His replacement alongside Pla in the #88 Akkodis ASP Mercedes-AMG will be announced shortly.

Saintéloc Junior Team was also left frustrated by a slow pit stop. The #25 Audi ran second throughout the opening stint of race 2, with Patric Niederhauser putting up a staunch defence against Dries Vanthoor. But a delay of several seconds in the pits dropped the car to sixth on the road and Aurélien Panis did well to keep Mattia Drudi at bay during the closing stages.

Tresor by Car Collection has made a dream start to its Fanatec GT World Challenge Europe Powered by AWS programme. After taking fourth at Imola, both Audi entries bagged a pair of points finish at Brands Hatch. The #11 crew of Christopher Haase and Simon Gachet sit fourth in the Sprint Cup standings following the opening event.

Given the number of fans who had turned out to see Valentino Rossi, it was fitting that the Italian scored his first overall championship points with an eighth-place finish in race 2. Rossi took the chequered flag, tackling the second stint after teammate Fred Vervisch handed him the car in a promising position. 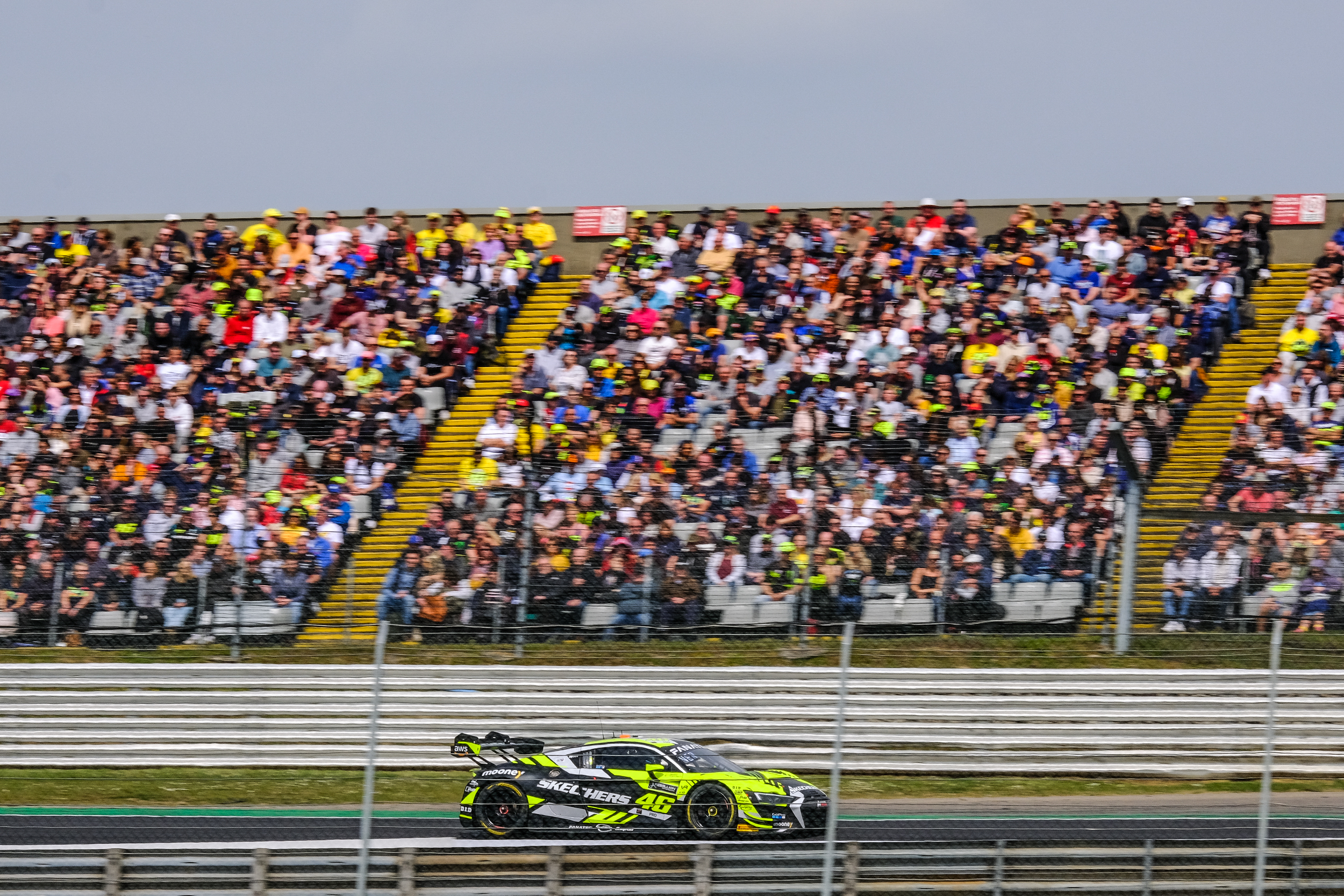 The #53 AF Corse Ferrari crew of De Pauw/Jean proved their opening race win was no fluke with a strong run to fifth position overall and a comfortable Silver Cup triumph in the second contest. The young duo looked at home among the front-runners and are just a few points shy of the overall championship lead following the opening event.

While the #53 Ferrari was untouchable at Brands Hatch, two other crews looked capable of contending for the Silver Cup crown this term. The #87 Akkodis ASP Mercedes-AMG was class runner-up in the opening contest and bagged eighth overall, while the #99 Attempto Racing Audi completed the podium in P10. Those positions were reversed in the second contest after the #87 was penalised for contact.

The AF Corse duo of Hugo Delacour and Cedric Sbirrazzuoli secured a maiden Pro-Am win with a commanding victory in the opening contest. The #21 Ferrari was more than 15 seconds clear of its nearest class rival at the chequered flag and beat several Silver Cup cars.

The #111 JP Motorsport McLaren prevailed in race 2. The Polish squad endured a tricky start to the weekend as gearbox problems kept it in the garage during free practice, but recovered to produce a fine showing with Patryk Krupinski and Christian Klien at the wheel.

After being eliminated from the opening race in a collision at Paddock Hill Bend, the #30 Team WRT Audi contested race 2 using a spare chassis. The car of Benji Goethe and Thomas Neubauer started from the pit lane and served a 10-second hold during race 2, coming home sixth in the Silver Cup class.

The #86 Akkodis ASP Mercedes-AMG was strongly reprimanded for causing the aforementioned race 1 incident. Igor Walilko received a stop-go penalty during the opening contest, as well as two behaviour warning points. This brought the Polish driver’s total to three points, resulting in a five-place grid drop for race 2.

Raffaele Marciello scored a record extending ninth Sprint Cup pole in Q2 after recovering from a dramatic off-track moment that very nearly ended in disaster. In doing so he broke the series lap record at Brands Hatch, which had stood since 2017, aided by the new tarmac that has been laid at the British circuit. The benchmark time now stands at 1m21.370s.

At the other end of the spectrum, Ulysse De Pauw scored his very first series pole by topping Q1 in the #53 AF Corse Ferrari. The 20-year-old Belgian, who went on to claim victory alongside Pierre Alexandre Jean, was previously a front-row starter at Zandvoort in 2021.

Ben Barker produced a superb showing in Q2 to put the #78 Barwell Motorsport Lamborghini sixth overall and at the top of the Pro-Am order. He was unable to capitalise on this, however, as teammate Alex Malykhin was forced to withdraw from the event due to illness.

Louis Machiels was the fastest Bronze-graded competitor at Brands Hatch. The AF Corse Ferrari driver bagged pole for the opening contest thanks to a time of 1m23.232s and went on to secure class podiums in both races alongside Andrea Bertolini.

The pit lane was flooded with over 1,000 fans on Sunday morning for an autograph session featuring the full field of drivers. There was particular interest in Valentino Rossi, with the queue for the Italian stretching a few hundred metres from the Team WRT box. In another fan initiative, the drivers climbed aboard a flatbed truck for a parade of the circuit during the lunchbreak.

Marciello and Boguslavskiy hold the early advantage in the Sprint Cup drivers' standings, while their Akoodis ASP squad tops the teams' classification. A perfect weekend for De Pauw/Jean ensures that they and AF Corse lead in the Silver Cup, while JP Motorsport and Krupinski/Klien hold a slender advantage in Pro-Am.

Battle lines have already been drawn in the fight for the overall Fanatec GT World Challenge Europe Powered by AWS title. Reigning champions Dries Vanthoor and Charles Weerts maintain the lead they established at Imola, but Raffaele Marciello has closed to within five points of the WRT drivers. The teams' standings tell a similar story with WRT heading Akkodis ASP by seven points.

Audi Sport remains on top of the global Fanatec GT World Challenge Powered by AWS standings, though Mercedes-AMG closed the gap by scoring more points than any other manufacturer at Brands Hatch. Ferrari also enjoyed a fruitful weekend at the British track, scoring four class wins across the event and moving up to fifth in the classification.

Fanatec GT World Challenge Europe Powered by AWS will be back on-track in less than two weeks' time at Magny-Cours. The French circuit will stage the second stop on the Sprint Cup schedule, while a packed line-up also features FFSA GT French Championship, Porsche Carrera Cup France and FFSA Tourisme TC France among others. Track activity begins on Friday 13 May, followed qualifying and race action on Saturday and Sunday.