In a race dominated from pole by the #88 AKKA ASP Mercedes-AMG, the #51 crew of Alessandro Pier Guidi, Côme Ledogar and Nicklas Nielsen came home seventh to bank enough points to seal the championship. There were anxious moments along the way, however, with the #88 running in position to steal the crown while the Ferrari struggled to make progress during the opening stint.

Raffaele Marciello controlled the start at the wheel of the #88 Mercedes-AMG, maintaining his advantage over Earl Bamber in the #22 GPX Martini Racing Porsche, while Marco Mapelli grabbed third position in a frantic run through the opening series of corners. Marciello led away once again after an early safety car period and was peerless during the opening stint, carving out a 17-second advantage before handing over to Felipe Fraga at the first round of pit stops.

The AKKA ASP car was pursued throughout most of the first two hours by the #22 Porsche, driven initially by Bamber and then Mathieu Jaminet, but the GPX squad lost ground to a pit infringement penalty incurred during its second stop. The #63 Orange1 FFF Racing Lamborghini also fell out of contention after being handed a drive-through for avoidable contact between Andrea Caldarelli and the #488 Rinaldi Racing Ferrari.

With its closest challengers hitting problems, the #88 Mercedes-AMG was able to pull further clear. Indeed, Fraga was 30 seconds to the good during the middle stint and handed over to Jules Gounon for the final hour in a commanding position. The #54 Dinamic Motorsport Porsche had run well during the opening phase of the race and jumped the #4 HRT Mercedes-AMG at the final round of stops to move into second, while the #32 Team WRT Audi was fourth with Dries Vanthoor at the wheel.

With the dominant AKKA ASP car on course for maximum points, the pressure was on the #51 Ferrari to secure at least a ninth-place finish. Nicklas Nielsen took the start from 11th and finally broke into the top-10 shortly before the first round of pit stops, though at this stage the title was still heading towards the AKKA ASP camp. The Iron Lynx crew regained control during the second hour, running in a comfortable seventh by the end of the middle stint.

When the final pit stop was complete and Pier Guidi had been installed in the #51 machine, the teams' and drivers' titles appeared to be secure. But, as is so often the case at Endurance Cup events, the final hour built towards a frantic conclusion. The action began with a safety car period on the 40-minute mark; when racing resumed with a little under half an hour remaining, the #88 Mercedes-AMG remained clear of the pack, while the #51 Ferrari was under mounting pressure.

The recovering #63 Lamborghini snatched sixth spot with 20 minutes to go, causing nervous moments in the Iron Lynx garage as Pier Guidi defended from the charging Mirko Bortolotti. The next car behind the #51 was the sister #71 Iron Lynx entry, providing a crucial buffer, but this was removed when contact between Antonio Fuoco and Albert Costa (#163 Emil Frey Racing Lamborghini) left the Ferrari with a puncture. When it ground to a halt on-track, another safety car period was required with less than 10 minutes remaining.

When racing resumed there was time for just three more laps, though that must have seemed an eternity for the Iron Lynx squad who could only afford to lose two more positions before the title was lost. Fortunately they had the ideal man for the job in the vastly experienced Pier Guidi, who brought the car home seventh to secure his second successive Endurance Cup drivers' title, as well as a second for Ledogar following his triumph in 2016 and a first for Nielsen.

Out front, AKKA ASP scored its first Endurance Cup win since the same event four years ago in dominant fashion. Despite the late safety car periods, Gounon was never under threat during the closing stages. Ultimately, he and Marciello finished just four points shy of the Endurance Cup title, having entered the event with margin of 23 to overcome. Though not quite enough, it was nevertheless a valiant effort from the French squad.

Dinamic Motorsport took runner-up with its #54 Porsche of Engelhart/Bachler/Cairoli, while the #32 Team WRT Audi grabbed third during the closing stint. This was a crucial move from Vanthoor, as it ensured that the Belgian squad finished a single point clear of Iron Lynx to seal the overall Endurance Cup teams' title, adding to the Sprint Cup and Fanatec GT World Challenge Europe Powered by AWS crowns they have already collected in 2021.

Bortolotti passed Nico Bastian (#4 HRT Mercedes-AMG) on the final lap to take fourth, while the #114 Emil Frey Racing Lamborghini was sixth. This ensured that Jack Aitken, who was at the wheel for the final stint, captured an excellent result on his return to competition. The #51 Ferrari was next, followed by the #163 Lamborghini and the #22 Porsche.

The #87 Mercedes-AMG completed a perfect day for AKKA ASP by taking victory in the Silver Cup, finishing 10th overall with the trio of Gachet/Drouet/ Tereschenko. The #31 Team WRT Audi was next, followed by the #7 Toksport WRT Mercedes-AMG and the #99 Attempto Racing Audi. The latter was still in the hunt for the class title before the contest began and was given fresh hope during the opening stages when the #14 Emil Frey Racing Lamborghini hit trouble.

Having entered the race with a significant advantage in the class standings, a puncture during the opening 15 minutes dropped the car to the rear of the field and left the team with a mountain to climb. Meanwhile, the Attempto Audi ran at the front of the class, but ultimately could not challenge for the win that it needed and slipped from the podium during the final stint. This meant that the Emil Frey Racing trio of Feller/Fontana/Ineichen collected the title, completing a clean sweep of the Silver Cup for the Swiss team.

Sky Tempesta Racing earned the Pro-Am teams' title, while Chris Froggatt was crowned drivers' champion after finishing fourth in this afternoon's race alongside Jonathan Hui and Rino Mastronardi. The result never looked in serious doubt as the rival #19 Orange1 FFF Racing Lamborghini received two drive-through penalties during the early stages of the race. The #93 Ferrari led until shortly before the closing hour, when a penalty dropped it off the class podium, though this was still enough to comfortably secure the crown.

The class was won by SPS Automotive Performance (#20 Mercedes-AMG) after Dominik Baumann passed the #52 AF Corse Ferrari with 50 minutes left on the clock. The latter was forced to make an additional stop during the final safety car period, allowing the #77 Barwell Motorsport Lamborghini to capture runner-up spot. The final place on the Pro-Am podium went to Oman Racing Team with its #97 Aston Martin.

It is also noteworthy that both of the new cars contesting the race completed the distance. The Audi R8 LMS GT3 Evo II came home 10th overall thanks to Saintéloc Racing, though as an invitational entry it was ineligible to score points. The BMW M4 GT3 also completed a successful debut, finishing 16th overall and on the lead lap.

Today's race brought the curtain down on the 2021 Fanatec GT World Challenge Europe Powered by AWS season. For the Endurance Cup, it completed a campaign that began at Monza in April before moving on to the Circuit Paul Ricard 1000kms, the TotalEnergies 24 Hours of Spa and the Nürburgring. With this weekend’s finale at Barcelona, the total number of laps completed during the campaign came to 999. Just one car managed to complete them all: the #51 Iron Lynx Ferrari. As the only crew to go the full distance this term, they are fitting Endurance champions for 2021.

Alessandro Pier Guidi, #51 Iron Lynx Ferrari: "To be honest, it was one of the most difficult stints of my career. I struggled a lot fighting with everyone and trying to defend, but in the end we put it all together and extracted the maximum from our car. So I must say thanks to our team, thanks to Ferrari and thanks to these guys [Ledogar and Nielsen]. To achieve this incredible result required a lot of hard work, and in the end if you look at the season I think we deserve this title. I'm very happy for Ferrari and I'm very happy for us."

Alex Fontana, #14 Emil Frey Racing Lamborghini: "These three titles were made with a Swiss driver line-up and the Swiss team I first joined in 2018. In the Sprint and Overall standings I'm alone after we had to change the line-up in Magny-Cours, but I had two fantastic co-drivers in Sprint with Arthur Rougier and Ricardo Feller. The fact we had an overall win in Sprint proves we were competitive – maybe not all the time, but only because we looked at the Overall result first as a comparison. That was the key for us in Silver: to try to be as competitive as possible. If you only settle for Silver then you fall too far back. And in Endurance we had Rolf [Ineichen] with all his amazing experience and great starts! It was a very solid line-up."

Chris Froggatt, #93 Sky Tempesta Racing Ferrari: "What an amazing weekend. It wasn't quite the way we wanted to finish it – we had the drive-through halfway through the race and lost some positions – but I'm elated. What else could we want? This was the aim at the start of the year and we've achieved it. I'm very happy."

Jules Gounon, #88 AKKA ASP Mercedes-AMG: "I don't like this position [the late Safety Car periods] because the car was fantastic and you're just hoping nothing will happen: not pushing too hard, not taking many kerbs. We worked so hard during practice to make that possible. Look, I'm really happy to win the race but still disappointed to lose the championship. We told you we would try to win it and see what happens after missing out on points at the TotalEnergies 24 Hours of Spa. Well done to Ferrari, and thanks to Mercedes-AMG and AKKA ASP for giving us a fantastic car, Raffaele [Marciello] for the full season and Felipe [Fraga] for the last two rounds. It was a great season.” 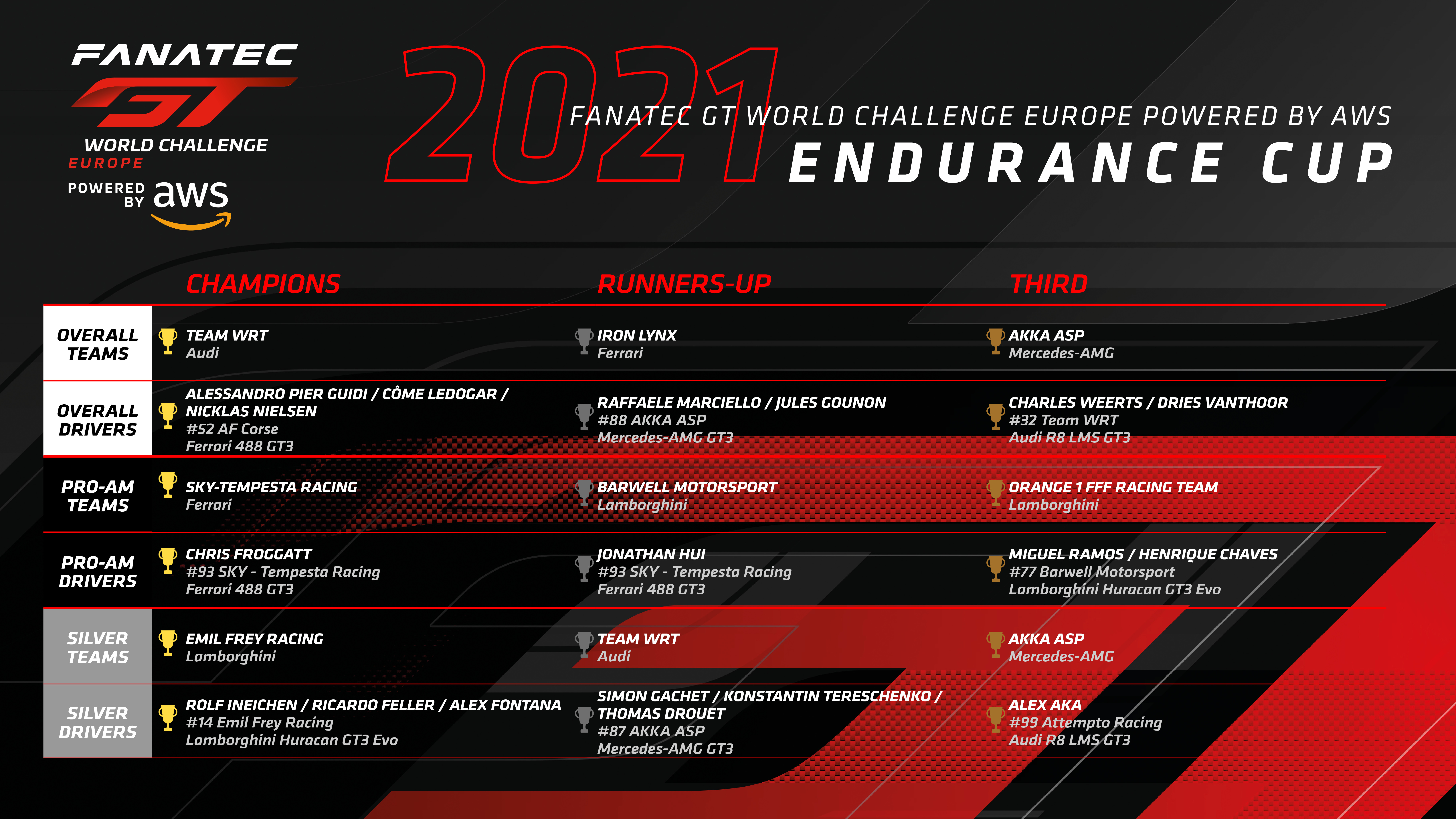