Starting from pole for the third time in four Endurance Cup outings, the Chinese squad finally converted its qualifying superiority into race victory thanks to a faultless drive from Mirko Bortolotti, Andrea Caldarelli and Marco Mapelli. The result earned the crew maximum points and ensured that they will travel to the season-closing Endurance Cup round at Circuit de Barcelona-Catalunya within striking distance of the championship lead.

Mapelli took the start and was comfortably clear of Raffaele Marciello (#88 AKKA ASP Mercedes-AMG) before the field reached turn 1. The gap fluctuated around the two-second mark throughout the opening phase, with Marciello keeping tabs on Mapelli but unable to close on to the rear of the Lamborghini. Behind them the #22 GPX Martini Racing Porsche held on to third in the hands of Earl Bamber, while the #114 Emil Frey Racing Lamborghini occupied fourth spot following a strong start from Konsta Lappalainen.

Marciello pitted before the #63 Lamborghini and handed over to Felipe Fraga, but the Brazilian emerged from the pits between the leading Pro-Am cars and lost significant ground attempting to find a way past. Shortly afterwards Caldarelli replaced Mapelli, by which time the gap had been stretched to more than eight seconds.

The Italian eased further clear during the middle stint, making smoother progress through traffic than Fraga and building an advantage of almost 18 seconds by the final pit stop. He handed over to Bortolotti, who instantly posted a new fastest time and continued to extend the #63 Lamborghini's advantage at the head of the field.

But, as is so often the case in the Endurance Cup, the final hour was packed with drama. It began with 40 minutes left on the clock when the #10 Boutsen Ginion BMW came to a halt in sight of the chicane. After running without serious interruption until this point the safety car was deployed for the first time, bunching up the field.

There was not significant pressure on Bortolotti at the restart, with several lapped cars positioned between the Italian and the second-placed #88 Mercedes-AMG driven by Jules Gounon. But the pack was soon behind the safety car once again following several incidents, including an accident that eliminated the #22 Porsche.

This time racing resumed with just one lapped car between the leaders, which Gounon immediately cleared at turn 1. With barely 10 minutes left on the clock the Frenchman had Bortolotti in his sights and pulled back four tenths on his first representative lap, cutting the gap to just 1.3 seconds. Over the final few tours the leading duo set near-identical times, but despite Gounon's sustained pressure Bortolotti remained cool out front. After showing winning pace all season, the FFF squad finally had its victory.

Gounon brought the #88 AKKA ASP Mercedes-AMG home as runner-up while the #4 HRT Mercedes-AMG completed the podium after an excellent run from Luca Stolz, Maro Engel and new addition Nico Bastian. A pair of Emil Frey Racing Lamborghini crews filled out the top-five with the #163 edging the #114 after running in close quarters throughout.

Sixth went to the #32 Team WRT Audi, giving full-season drivers Charles Weerts and Dries Vanthoor enough points to seal the overall Fanatec GT World Challenge Europe Powered by AWS title with an unprecedented two rounds left to run. Having already clinched the Sprint Cup crown, they will travel to the season finale at Circuit de Barcelona-Catalunya with the aim of completing a championship sweep by adding the Endurance Cup.

To do so they will need to overhaul the #51 Iron Lynx Ferrari crew of Alessandro Pier Guidi, Côme Ledogar and Nicklas Nielsen, who finished seventh at the Nürburgring to ensure that they take a 13-point advantage to the decider. Pier Guidi fought a close battle with Vanthoor during the final stint, reprising their memorable duel from last month's TotalEnergies 24 Hours of Spa. This time, however, Vanthoor emerged on top.

The Silver Cup winner took the chequered flag eighth overall following a dramatic conclusion to the class battle. The #16 Grasser Racing Lamborghini dominated much of the race from pole, only to hit disaster during the final 30 minutes.

The first setback came when Tim Zimmermann lost the lead to the #14 Emil Frey Racing Lamborghini, which had been tipped into a spin during the opening stint before gradually climbing back up the order. By the deciding hour Ricardo Feller was fourth in class and a brilliant closing stint saw the Swiss ace jump ahead of the Grasser Racing entry and into the lead shortly before the second safety car period.

Feller was unmatched thereafter, scoring a win that puts the #14 line-up on the brink of clinching their class title. The Grasser Racing crew suffered heartbreak with just minutes remaining when Zimmermann went off at the chicane, sending the stricken Lamborghini back to the pits and into retirement. The Silver Cup podium finishers completed the overall top-10, with the #99 Attempto Racing Audi beating the #7 Toksport WRT Mercedes-AMG.

Pro-Am was decided in even more dramatic fashion shortly after the final safety car period. The #93 Sky Tempesta Ferrari led early on but lost ground following a slow first pit stop. This allowed the #20 SPS Automotive Performance Mercedes-AMG to assume the lead, but the #19 Orange1 FFF Racing Lamborghini had seized the advantage before the middle stint was complete with Hiroshi Hamaguchi at the wheel. The Japanese driver handed over to Phil Keen for the closing hour, but victory looked lost when Fabian Schiller dived past with 12 minutes left to run.

Yet there was still another twist to come. Amid heavy traffic, Schiller ran wide at the chicane and skated across the gravel. Keen pounced and returned to the lead, this time holding on to clinch victory alongside Hamaguchi and Stefano Costantini. The #93 Ferrari was second after Chris Froggatt also made it past Schiller during the closing stages, while the #69 Mercedes-AMG completed the podium.

The Endurance Cup drivers' and teams' titles in each category will go to the finale at Circuit de Barcelona-Catalunya, which wraps up the 2021 Fanatec GT World Challenge Europe Powered by AWS campaign on 8-10 October. Before that, the curtain will come down on the Sprint Cup with a pair of 60-minute races at Valencia on 24-26 September. With plenty of silverware still up for grabs, the closing races promise to be as action-packed as today’s dramatic final hour at the Nürburgring.

Mirko Bortolotti, #63 Orange1 FFF Racing Lamborghini: “I tried to manage the safety cars as well as possible. The dust was a little bit nasty at the end; the whole track was dirty, so everything came into the cockpit. To win is fantastic and it’s great to be back on top. We managed to turn our third pole position into a win – finally! It was always a matter of time and at last the time arrived.”

Rolf Ineichen, #14 Emil Frey Racing Lamborghini: “This was quite a difficult win. At the start everything was fine, but then unfortunately I was hit and spun. Luckily I just did a full rotation and moved on without losing too much time. Alex and Ricardo had to push to get back the positions and Ricardo in particular did a mega job in the last stint. I’m very happy for everyone in the team and also for Lamborghini, winning overall and with four cars in the top-10.” 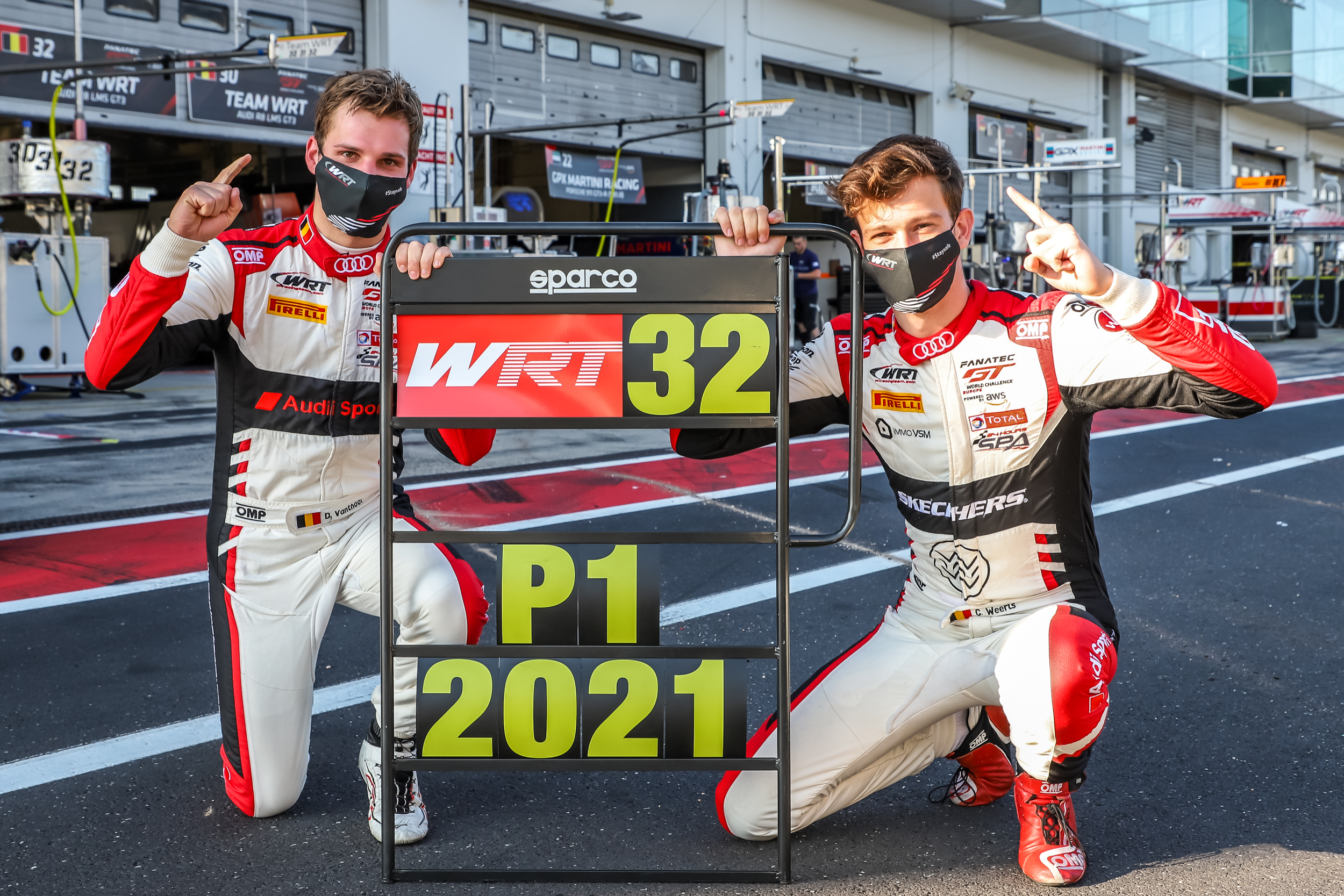 Dries Vanthoor, #32 Team WRT Audi: "I feel quite surprised! To be honest, we didn’t expect to be overall champions this weekend, because our rivals also scored points. It's been a fantastic season: we've won Sprint and the overall title with two race weekends to go. This means we really did our best, together with Team WRT, Audi and all the people who supported us. I want to thank everyone. There is still one championship open and we are in the hunt, so we will do our best to win the Endurance title as well."

Charles Weerts, #32 Team WRT Audi: "As Dries already mentioned, we were surprised to clinch the title here! It was our objective to win Sprint and Endurance and we knew that if we were strong in both the overall points would be in our favour. I'm really happy and still surprised! Now we have everything to play for in Barcelona with the Endurance title up for grabs and we will do our best to win that as well. It will be a challenge, but it's definitely possible."