Charles Weerts and Dries Vanthoor opened a 16-point gap at the top of the Fanatec GT World Challenge Europe Powered by AWS Sprint Cup standings with a comfortable win in this weekend's opening race at Misano.

The eventual margin of victory was only 1.1 seconds, though neither Weerts nor Vanthoor faced a serious challenge for the lead during the 60-minute contest. In contrast, the action behind was relentless from beginning to end, with several battles going down to the final lap.

Costa posed the most serious threat to WRT during the opening stages, posting successive fast laps to close on to the rear of the #32 Audi, but he was unable to make a serious attempt for the lead. Roussel ran third, while Luca Stolz (#6 Mercedes-AMG Team Toksport WRT) had moved into fourth after making an excellent getaway from seventh on the grid.

The race was neutralised before the 10-minute mark after two of the leading Pro-Am contenders found themselves in the gravel, eliminating both Louis Machiels (#52 AF Corse Ferrari) and Valentin Pierburg (#20 SPS Automotive Performance Mercedes-AMG) from the battle for class victory.

Weerts judged the restart well and was already four tenths clear of Costa when racing resumed. The Audi driver did not have to defend on the first green flag lap, allowing him to edge away and build a one-second advantage before the pit window had opened.

There was action behind as Stolz muscled past Roussel to take third at turn 1, sending the Saintéloc Racing Audi off line and presenting Jim Pla (#87 AKKA ASP Mercedes-AMG) with an opportunity. Aurélien Panis had the ideal view of this battle from sixth position and was able to take full advantage, diving past both of his fellow Frenchman to assume fourth.

Emil Frey Racing's challenge for victory was effectively ended in the pits. The #163 was slow to pull away after Norbert Siedler had taken the controls from Costa, losing 14 seconds and dropping the car back. Team WRT reacted quickly and swapped Weerts out for Vanthoor, who returned to the track with a commanding eight-second advantage over Maro Engel in the #6 Mercedes-AMG.

His lead was wiped out by a second safety car, which followed a collision that left #107 CMR Bentley and the #188 Garage 59 Aston Martin beached in separate gravel beds. But it was clear that Vanthoor had the pace to handle the restart and keep Engel at bay, meaning attention was focussed on the battle taking place behind.

Christopher Haase may have caused a few tense seconds in the Saintéloc Racing garage when he swooped around teammate Frédéric Vervisch, but both Audi Sport drivers judged their battle well and the #25 moved ahead of the #26 cleanly. Ben Barnicoat was on a charge in the #38 JOTA McLaren, passing the #87 Mercedes-AMG of Konstantin Tereschenko for fifth, while Raffaele Marciello (#88 AKKA ASP Mercedes-AMG) was on a charge having assumed the controls from Timur Boguslavskiy.

Vanthoor completed the job, taking the chequered flag from Engel and Haase, the latter securing a first podium of the 2021 campaign for Saintéloc Racing and a first in the series for crew-mate Roussel. Vervisch was fourth in the #26 Audi to wrap up a season-best showing from the Saintéloc squad, while Barnicoat completed the top-five in the car he shares with Oliver Wilkinson.* 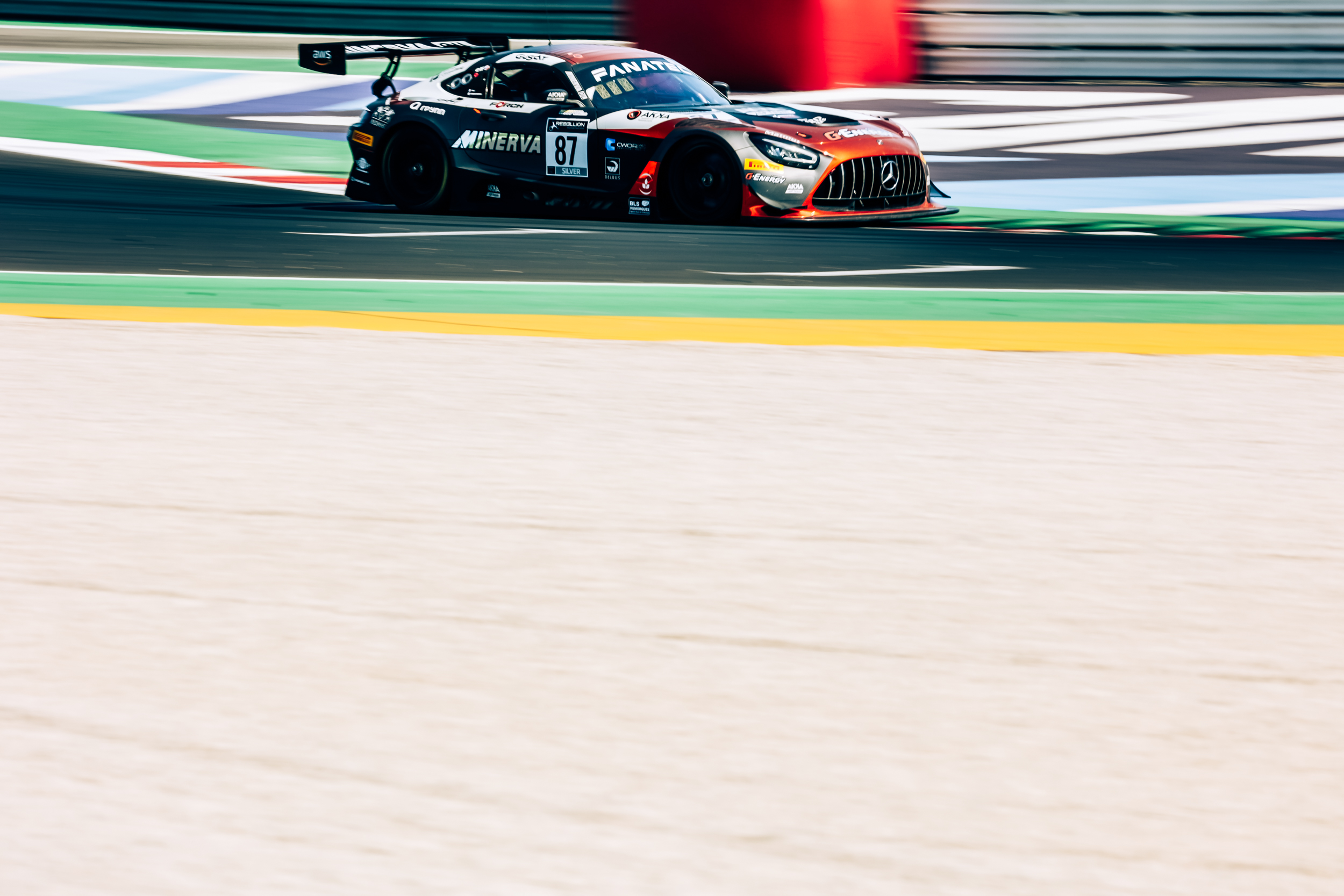 Marciello charged to sixth after a series of overtakes, including a brilliant battle with teammate Tereschenko. The Russian driver held on to seventh and took Silver Cup victory in the process, fending off class rival Ricardo Feller (#14 Emil Frey Racing Lamborghini) with a resilient final-lap performance. Jack Aitken jumped from 10th to eighth on the final tour by passing two of his teammates, leading home the #14 of Feller and the #163 driven by Siedler.

Barwell Motorsport returned to winning ways in the Pro-Am class, sending Miguel Ramos and Henrique Chaves to within half a point of the championship lead. The #77 Lamborghini ran second to pole-sitter Machiels early on, assuming the lead when the Belgian driver went off and staying there for the remainder of the race. Alex West and Jonny Adam (#188 Garage 59 Aston Martin) finished second, while SPS duo Pierburg and Dominik Baumann recovered to take the final place on the class podium with their #20 Mercedes-AMG. 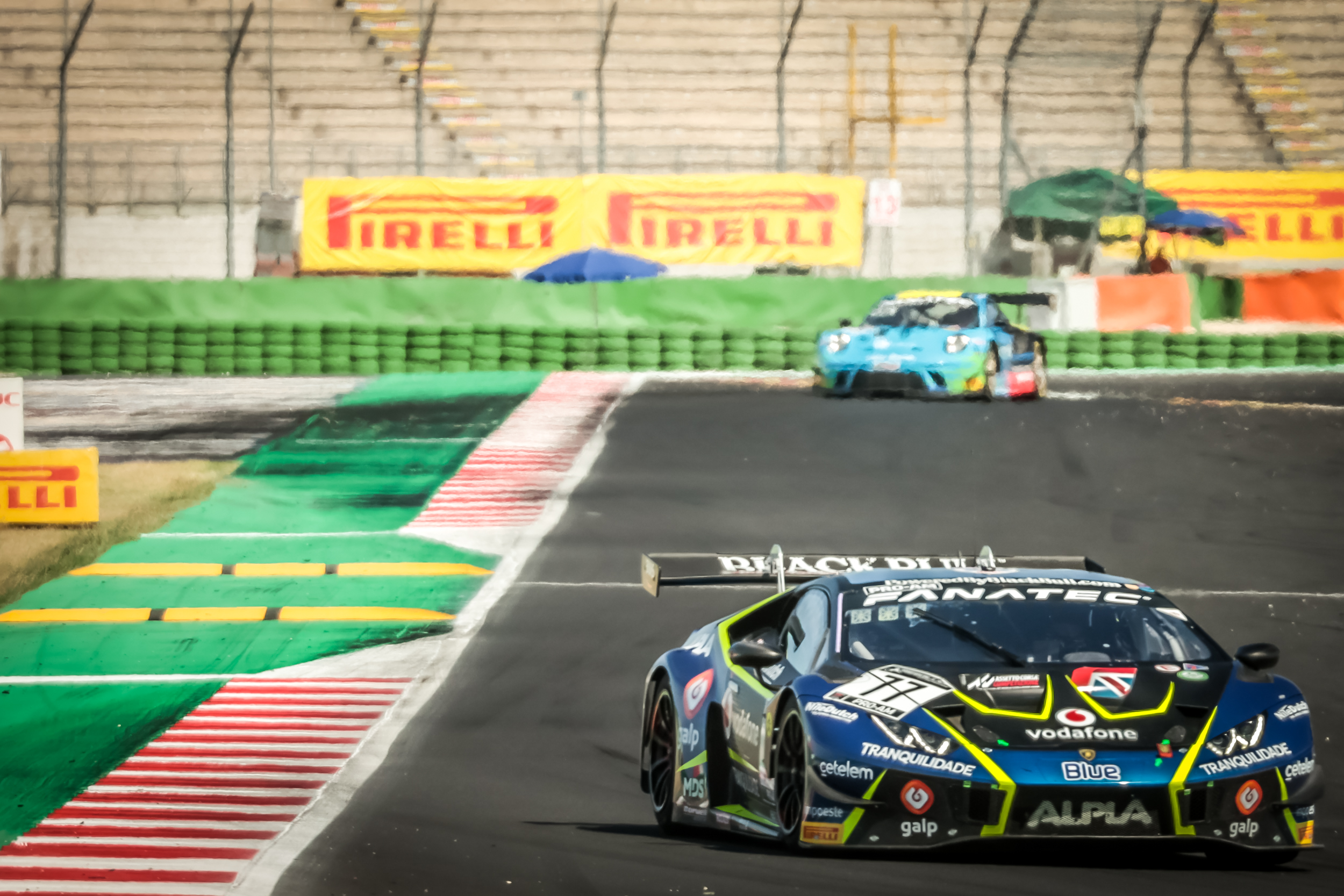 There will be another full day of action tomorrow at Misano with qualifying at 09:00 and the weekend's second contest at 14:00. A 29-car field will contest the sixth race of the Sprint Cup season after De Leener was forced to withdraw as a precaution following today’s opening-lap accident. All of the action will be streamed live across the series' social media platforms and the GT World YouTube channel.

Today's victory means that reigning champions Weerts and Vanthoor will begin the second half of the campaign with a 16-point cushion at the top of the standings. Having earned four wins from the previous five races at Misano, the Team WRT duo will be keen to continue this momentum and extend their advantage still further on Sunday afternoon.

* The #38 JOTA McLaren recieved a 45-second post-race penalty for a pit lane infringement and was subsequently classified 22nd. The full amended result can be viewed here.