It was a particularly sweet success for the Dubai-based squad, which saw championship glory slip from its grasp at last year's Circuit Paul Ricard 1000km after leading much of the six-hour race. This time, however, it was Orange1 FFF Racing that suffered late heartbreak. The #63 Lamborghini led from pole and looked to be on course for a dominant victory, particularly when Andrea Caldarelli pulled 13 seconds clear during the third hour.

But the #22 Porsche was never far from the front. Starting from sixth, Earl Bamber made progress during the first two stints and handed over to Mathieu Jaminet in fifth spot. The French ace was in superb form on home turf, passing the #71 Iron Lynx Ferrari of Callum Ilott and then the #34 Walkenhorst Motorsport BMW of Marco Wittmann to establish the GPX crew as serious contenders. Nevertheless, the #63 Lamborghini remained the strong favourite as the race moved past half distance.

The race ran without interruption until the closing minutes of the fourth hour when the #2 GetSpeed Mercedes-AMG stopped on-track following an incident, causing a full-course yellow period which developed into a safety car. The #63 Lamborghini made its penultimate stop and maintained its position at the head of the field, while the #22 Porsche lost several seconds in the pits and slipped behind the #34 BMW.

Matt Campbell assumed the controls of the GPX machine for the final two hours and quickly re-took second spot from Sheldon van der Linde before setting off in pursuit of long-time leader Caldarelli. The Australian driver edged closer throughout the stint and, with the final round of stops looming, the gap had closed to less than two seconds.

To add to the drama, the leaders dived into the pits together. The #63 Lamborghini maintained its advantage with Marco Mapelli now behind the wheel, but as the clock ticked into the final hour it was clear that Campbell had a pace advantage. The hunt was on.

The Porsche ace quickly wiped out the two-second deficit and was especially fast on the long run down the Mistral Straight. With 40 minutes to go Campbell got a run on the Lamborghini and went around the outside, completing the pass in time to make the corner. It seemed to be the race-winning move, only for the Australian to run wide shortly afterwards and allow Mapelli another chance. There was slight contact, but both lived to fight another day.

It was only a brief reprieve for Mapelli, with Campbell pulling the same move a lap later. Once again the Australian got the job done and this time held his position. From this point onwards the Porsche man had control of the race and brought the #22 car home victorious, securing GPX its first overall win since the 2019 Total 24 Hours of Spa.

Having surrendered the lead to Campbell the #63 Lamborghini fell into the clutches of the chasing pack, first being passed by the #71 Iron Lynx Ferrari and then coming under sustained pressure from the #32 Team WRT Audi of Dries Vanthoor.

The Belgian squad had made superb progress during the race after a difficult qualifying session resulted in a 15th-place starting slot. The race was another story altogether as Charles Weerts and Kelvin van der Linde climbed the order, allowing Vanthoor to take the controls in fifth. The youngster made further progress towards the front and overhauled Mapelli for third spot on the final lap, sparking jubilant scenes among the WRT crew.

They were subsequently promoted to second when the #71 Ferrari was penalised for a pit lane infringement, capping a day that began with Van der Linde scoring victory in the Fanatec Esports GT Pro Series race staged on Assetto Corsa Competizione. The #63 Lamborghini was also promoted to the final place on the podium, rewarding a day in which Bortolotti, Caldarelli and Mapelli combined to lead 166 of 182 laps.

The penalised #71 Iron Lynx Ferrari was classified fourth, followed by the sister #51 machine, AKKA ASP’s #88 Mercedes-AMG and the #54 Dinamic Motorsport Porsche. The #34 Walkenhorst Motorsport BMW beat the sister #35 car to eighth, while Saintéloc Racing completed the top-10 with its #26 Audi. 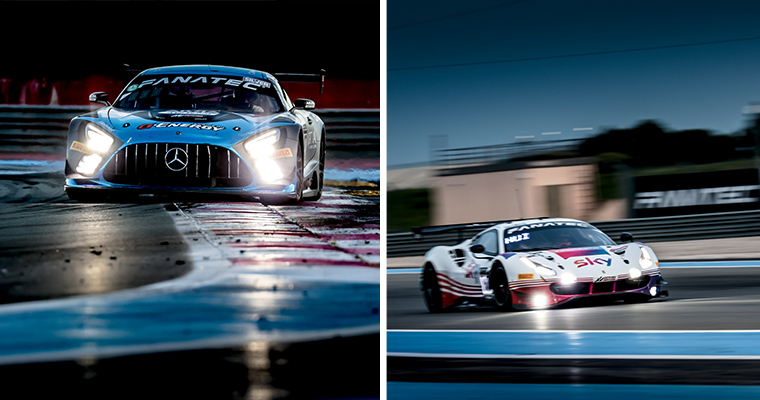 Silver Cup honours went the way of AKKA ASP, which triumphed with its #87 Mercedes-AMG after taking the lead from the pole-sitting #159 Garage 59 Aston Martin on the two-hour mark. Konstantin Tereschenko, Simon Gachet and Thomas Drouet were 11th overall at the chequered flag, two spots clear of the chasing #14 Emil Frey Racing Lamborghini. Grasser Racing completed the Silver Cup podium thanks to a strong run for its #16 Lamborghini.

Sky Tempesta Racing took the Pro-Am win with its #93 Ferrari. Eddie Cheever III made a final-lap pass on the #19 Orange1 FFF Racing Lamborghini, though a time penalty for the long-time class leader meant the result had already been secured. Cheever and team-mates Chris Froggatt and Jonathan Hui led the early stages only to be hit with a penalty of their own, but fought back and chased down the Lamborghini at the finish. The #188 Garage 59 Aston Martin remained a factor throughout and ultimately completed the class podium.

The next stop on the Fanatec GT World Challenge Europe Powered by AWS tour will be Dutch venue Zandvoort, which stages a pair of Sprint Cup contests on 18-20 June. From there, competitors will head to Belgian to undertake the Total 24 Hours of Spa test days (22-23 June). Indeed, the season’s marquee race is now just around the corner

Matt Campbell, #22 GPX Racing Porsche: "Yeah, wow! Going into the race we certainly didn't expect that. we had a troubled lead up but the boys did a fantastic job and the GPX crew were flawless during the pit stops. It wasn't easy – we had a bit of contact in the last stint – but we got it done. I'm so thrilled for GPX. We didn't have the best event at Monza so to fight like this... yeah, it's fantastic."

Dries Vanthoor, #32 Team WRT Audi: "I've never been so happy for third, but now I heard it was second?! We've been struggling all weekend – literally, all weekend – and tried changing everything on the car, but couldn't find pace. We were lacking top speed everywhere so it's really a relief that we could be here. We fought hard and had an amazing strategy. Plus, the boys at the pit stops did an amazing job and my team-mates drove two amazing stints. I've never been so happy for third!"