Porsche is celebrating back-to-back victories at the Total 24 Hours of Spa after a dramatic conclusion to this year’s contest saw ROWE Racing snatch the win during the deciding stages.

The #98 crew of Nick Tandy, Earl Bamber and Laurens Vanthoor did not lead until the conclusion of the 23rd hour but came alive during the closing phase of competition, which was staged in typically challenging Ardennes weather.

The car was towards the lower end of the top-10 at two-thirds distance, playing a patient game in a race that featured more night running than ever before. Indeed, it was not until the 22-hour mark that the #98 Porsche became a firm contender at the front, closing on to the rear of a multi-car scrap that featured Audi Sport Team Attempto, Audi Sport Team Sainteloc and the Ferrari entries of AF Corse and SMP Racing.

As the battle reached its crescendo it was the Attempto outfit that appeared to be in control, looking assured at the front despite increasingly heavy rainfall at Spa-Francorchamps. Frederic Vervisch handed the controls to Patric Niederhauser with two hours left on the clock, giving the Swiss driver a seven-second advantage over the Sainteloc car of Dorian Boccolacci.

Behind them, however, Tandy was hitting his stride. With 90 minutes remaining the British driver put a crucial move on Alessandro Pier Guidi in the #51 AF Corse Ferrari to move into third place, then began cutting the deficit to Boccolacci.

A full-course yellow period with 75 minutes left would prove crucial. All of the leaders ducked into the pits, but the ROWE Porsche elected to double-stint its Pirelli tyres and was therefore able to leapfrog both of the Audi Sport crews.

With the safety car now on-track this advantage was to prove crucial, as the final run through the pits would not change the order. At the start of the final hour, the ROWE Porsche had moved into the lead.

The race was not yet won, however, as Tandy was forced to defend at two separate restarts on older tyres and with developing mechanical gremlins. The final green flag of the day flew with just over 35 minutes remaining and while Tandy made an early break Niederhauser became faster as the final reckoning approached.

The Swiss driver was taking a few tenths out of the Porsche sector by sector, bringing him to within under two seconds of Tandy. This was the prelude to a dramatic final few laps, particularly as the Porsche appeared to be coasting on the final tour with what Tandy would later suggest was a gearbox issue.

In fact the Porsche was dropping oil, making it impossible for the Audi Sport Team Attempto car to launch an attack on the run to the chequered flag. In a remarkable twist, the developing problem helped the ROWE squad to secure Porsche's second successive Total 24 Hours of Spa win following GPX Racing's triumph last year.

Tandy drove the headline stints, but his teammates were also crucial to the victory. Bamber put in the longest shift among the trio, taking the wheel for almost nine hours across the race. Vanthoor's winning experience was also invaluable as the local ace captured his second Total 24 Hours of Spa victory. The ROWE squad must also take huge credit, having secured its second overall win and a fourth podium in five years.

The #66 Audi Sport Team Attempto crew was a valiant second after a sterling drive from Niederhauser, Vervisch and Mattia Drudi. Dinamic Motorsport put a second Porsche on the podium, taking third spot from the #51 AF Corse Ferrari during the closing stages after a thrilling battle between Matteo Cairoli and Pier Guidi's #51 Ferrari. The AF Corse man then slipped behind the #12 GPX Racing Porsche, giving the Stuttgart marque four of the top-five finishers. 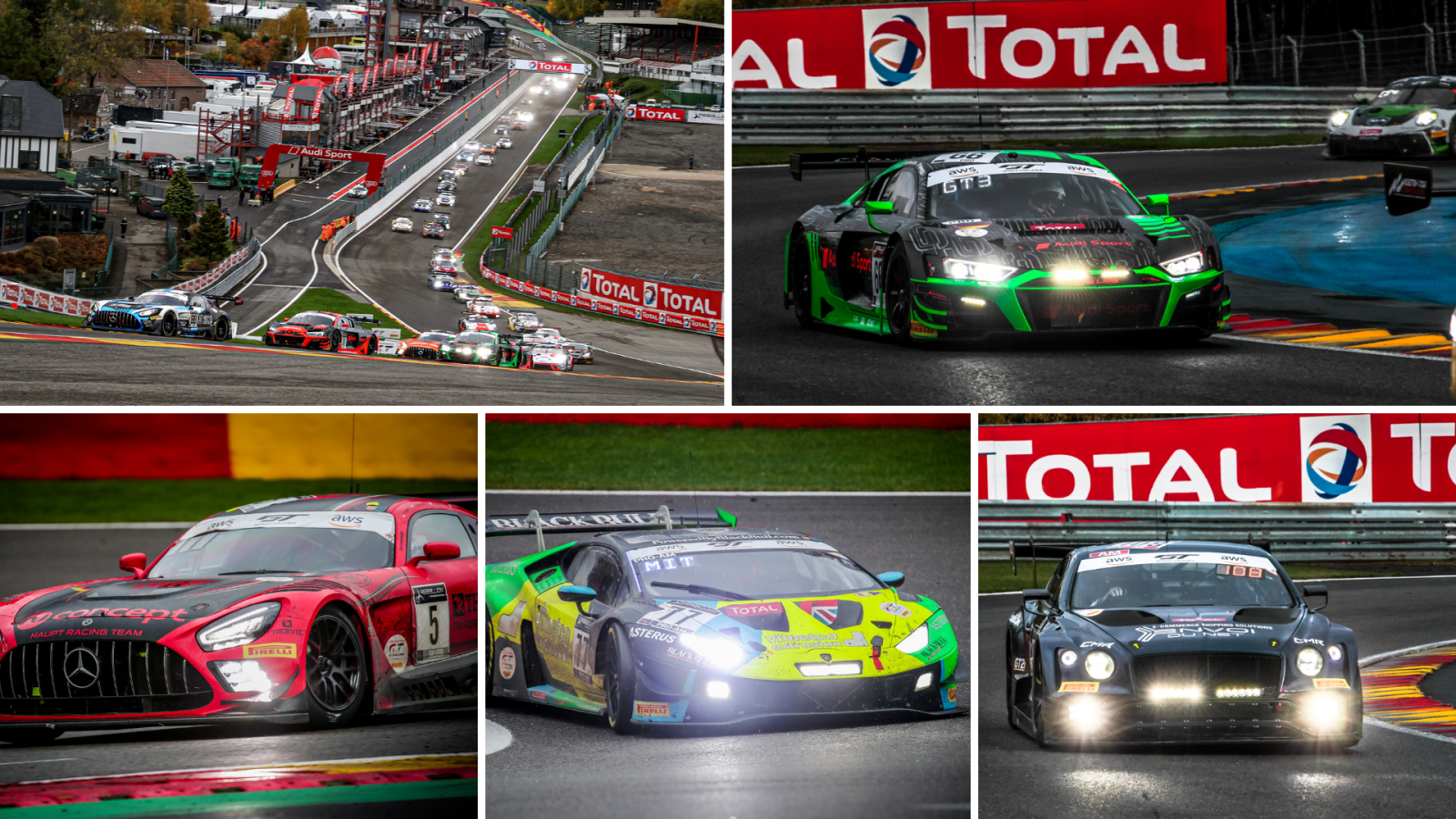 Three crews emerged as the pick of the Pro-Am runners at an early stage of the race, each taking turns to lead the class. Ultimately it was the #77 Barwell Motorsport Lamborghini that clinched victory with a fine 16th place overall, having made major progress by taking wet tyres just as heavy rain began to fall.

The star of the show was Sandy Mitchell, whose pace and poise on a wet track was crucial to Barwell's success. Indeed, this was the young Scot's second successive class win with the squad following a Silver Cup triumph last year. Leo Machitski also drove a strong race to add a Pro-Am win to his 2018 Am Cup victory, while father-son duo Rob and Ricky Collard brought an ideal blend of experience and speed to the effort and sealed an emotional result.

They beat two very worthy opponents, the #93 Sky Tempesta Racing Ferrari and the #188 Garage 59 Aston Martin, both of which had spells at the front of the order. The first three Pro-Am finishers were among the overall top-20 at the chequered flag, a superb achievement in a uniquely challenging edition of the 24 Hours. The result also sealed GT World Challenge Europe Powered by AWS Pro-Am titles for Sky Tempesta Racing and its full-season drivers, Chris Froggatt and Eddie Cheever III.

HRT clinched Silver Cup honours with its #5 Mercedes-AMG, running largely unopposed during the final quarter of the race after the rival #78 Barwell Motorsport Lamborghini was eliminated in a multi-car accident at Raidillon. The HRT crew of Hubert Haupt, Gabriele Piana, Sergey Afanasiev and Michele Beretta was in the mix from the early stages and always looked set to battle for class glory at the finish.

Damage during the early morning hours cost them time, but they were not out of the hunt and pushed to recover ground. Their task was made simpler by the departure of the Barwell car with which they had been swapping the lead for several hours. The win will be especially sweet for Piana and team boss Haupt, who finished on the Silver Cup podium in 2018 and 2019. Fittingly, the latter was at the wheel for the chequered flag.

The #84 HTP Mercedes-AMG was second after completing an excellent recovery from early problems. Fast since the beginning of practice, the squad was caught up in the opening skirmishes and fell to the rear of the Silver order, but made good progress to emerge as a contender on Sunday morning. Orange1 FFF Racing Lamborghini rounded out the class podium, continuing Lamborghini's fine run in the Silver category and contributing to the Italian brand's Coupe du Roi victory.

The #108 CMR Bentley claimed Am Cup honours thanks to Clément Mateu, Romano Ricci, Stéphane Tribaudini and Stéphane Lémeret, the latter celebrating his second class win in the Ardennes after clinching Pro-Am honours in 2015. The Bentley was the last of the four Am cars running at the finish and was still performing strongly at the chequered flag, placing an excellent 30th overall.

As is the case at every edition, there were several hard-luck stories. In particular, the #63 Orange1 FFF Racing Lamborghini was a clear contender for the win before Dennis Lind crashed at Raidillon during the morning phase. The sight of a distraught Lind slouched beside the track was not easy to watch, but it perfectly encapsulated the emotion and passion that drives competitors to test themselves at the Total 24 Hours of Spa.

It was a landmark event, too. Earlier in the race, Lind's teammate Marco Mapelli had set the fastest racing lap in GT3 machinery by posting a 2m18.146s at the wheel of the #63 Lamborghini, while an all-time record of eight cars finished on the lead lap after a full day and night of fierce competition.

These were fitting footnotes to a milestone race, but the event was not complete without the passionate fans who pack into Spa-Francorchamps each year and bring the weekend to life. Their absence was felt keenly throughout proceedings, particularly during the 24 Hour.

To this end, SRO Motorsports Group wishes to thank everyone involved with making the 2020 Total 24 Hours of Spa possible despite the challenges posed by the ongoing COVID-19 restrictions. In such a challenging year, it was a pleasure to share this great race with the world.

Nick Tandy, #98 ROWE Racing Porsche – overall winner: “Halfway through the penultimate lap I had a small lock-up into turn eight, and when I exited the corner I heard this loud knocking noise. I thought a driveshaft joining had broken, but the car was still running. Apparently the gearbox casing was damaged as well, and unfortunately for our competitors we coated the track with oil. We can only apologise for that, but it kind of saved us! I had to drive the last lap and a half without pushing, and I had to coast through the corners in order not to cause more damage. But, in the end, to win this with these two guys is an incredible feeling, and so is sharing it with all the team at ROWE. They have been so good this week, and I’m so happy that they could win Spa and the Nürburgring in the same year.”

Leo Machitski, #77 Barwell Motorsport Lamborghini – Pro-Am winner: “2020 has been difficult for everybody. With Barwell we have had a pretty good run here at Spa, winning the Am Cup in 2018, but it seemed like we were out of luck this year. This was my seventh or eighth Total 24 Hours of Spa, and I have finished a couple of times on the podium before, but this is a very, very nice one. Being the first Lamborghini at the finish, beating the Silver Cup winners and some former F1 drivers in the process… I’m sure it will only sink in tomorrow!”

Hubert Haupt, #5 HRT Mercedes-AMG – Silver Cup winner: “We started this project only in June, and to win the Silver Cup here in Spa is a fantastic achievement. It is a dream come true. We had a strong line-up and the team did a fantastic job. Our main aim was to avoid trouble, and apart from a small issue at the front of the car, which cost us five minutes, we ran trouble-free until the end. Fantastic.”

Stéphane Lémeret, #108 CMR Bentley – Am Cup winner: “This was my 22nd participation in the Total 24 Hours of Spa, and this edition was the most difficult one by far. During my first stint I called the team on the radio to tell them I wanted to come back to the box and cry! These conditions were incredible. I have to thank my team-mates; they did a perfect job.”