GT World Challenge Europe Powered by AWS will welcome leading series from across the continent to its 2020 support line-up.

The 10-round championship is once again split equally between the Endurance Cup and Sprint Cup, with the Total 24 Hours of Spa set to provide the season's marquee event on 23-26 July. Each weekend will feature a wealth of high-calibre support races, placing fans in the grandstands and those watching from home at the heart of the action.

The prestigious Formula Renault Eurocup will occupy the most prominent position, with the junior category joining for eight events during the upcoming campaign. This will include the Total 24 Hours of Spa, where it will be the only single-seater series competing in front of the Belgian classic's packed grandstands.

Indeed, Formula Renault Eurocup will be part of all five Endurance Cup events this year, taking its young hopefuls to Monza, Silverstone, Circuit Paul Ricard Spa and the Nürburgring. The series will also be present for the Sprint Cup rounds at Zandvoort, Hungaroring and Circuit de Barcelona-Catalunya, ensuring a varied schedule at the continent’s premier circuits.

The popular GT4 European Series will also play a major role in 2020. With grids featuring everything from Aston Martin and Porsche machinery to the Ginetta G55 and KTM's X-Bow, the series has experienced tremendous growth in recent years. With all six of its doubleheader events playing out on GT World Challenge Europe weekends, it will once again enjoy an ideal platform during the season ahead.

The GT4 European Series begins at Silverstone before contesting rounds at Circuit Paul Ricard and Zandvoort. Next it will return to the support package at the Total 24 Hours of Spa for the first time since 2014, providing the series with a marquee event in the Ardennes. Following the traditional August break the championship will resume at the Nürburgring before culminating at the Hungaroring.

The 2020 season will see the popular Lamborghini Super Trofeo form part of the support package for a 10th year in succession, extending a relationship that stretches back to the formation of the Blancpain Endurance Series in 2011. Indeed, the long-running Super Trofeo category was present for the very first Endurance contest at Monza.

In 2020 it will stage five of its six rounds at GT World Challenge Europe events and, as in 2011, will begin the campaign on home turf at historic Monza. The action will then move to Circuit Paul Ricard, before the series resumes its place on the Total 24 Hours of Spa support package. It will also be part of the on-track entertainment for September's trip to the Nürburgring and the GT World Challenge Europe season finale at Circuit de Barcelona-Catalunya.

Catering solely for Bronze-graded drivers, GT Sports Club Europe will embark upon its sixth season of competition in 2020. It promises to be fascinating year, with the championship expanding to encompass the new breed of GT2 machinery alongside the established GT3 entrants.

What’s more, each of its five events will be staged alongside GT World Challenge Europe at the continent’s premier circuits. The season will begin at Monza for a third successive year before heading to the south of France and Circuit Paul Ricard. GT Sports Club Europe will then join the festivities at the Total 24 Hours of Spa before concluding with events at the Nürburgring and Circuit de Barcelona-Catalunya.

In addition to the series that will make regular appearances on the support bill, several championships will join GT World Challenge Europe on a one-off basis this term. When Brands Hatch opens the Sprint Cup season, fans will enjoy a wealth of domestic action from the Radical Challenge, 7 Race Series, Porsche Club and Sports 2000 categories. Indeed, there will be little pause between on-track action during this packed two-day event.

There will be plenty of local flavour at Zandvoort, too, with the Porsche Carrera Cup Benelux staging its third round of the season at the North Sea venue. Further on-track entertainment will come from the Benelux region's Mazda MX-5 Cup championship, which attracts big grids featuring the popular Japanese machine.

The X-Bow Battle series will continue to form part of the GT World Challenge Europe support package this term. Having been present at the Hungaroring last year, the championship will join the Misano round in 2020. The Italian venue will also feature the Alpine Europa Cup, a one-make series for the French brand's A110 model, as well as domestic touring car category TCR Italy.

As was the case last year, the French FFSA F4 Championship will make an appearance on the GT World Challenge Europe support bill at the Hungaroring, adding a second single-seater category to the line-up. Finally, the popular TCR Europe series will head to Circuit de Barcelona-Catalunya to bolster the season-closing event's support package, bringing a highly competitive grid that features Audi, Honda and Volkswagen machinery.

With such a variety of support categories set to join GT World Challenge Europe Powered by AWS, the 2020 season promises to deliver unmissable action at the continent’s premier motorsport venues. The official test days at Paul Ricard (12/13 March) will signal the start of the new season, before racing gets underway with a three-hour Endurance Cup contest at Monza on 17-19 April. 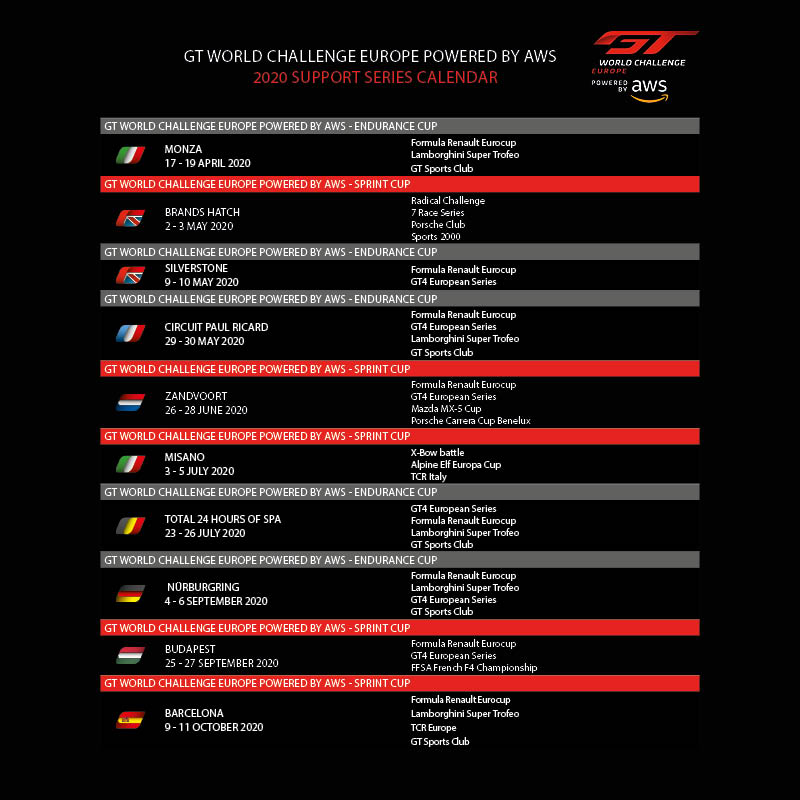