Skip to Main Content
The #107 Bentley Continental GT3 has won the Circuit Paul Ricard 1000kms, converting pole position into victory to secure the British manufacturer a landmark success as it celebrates its 100th anniversary year.

The win is sweet redemption for the M-Sport crew of Jules Gounon, Steven Kane and Jordan Pepper, who came within a lap of conquering this race last season. On that occasion, Gounon was passed on the final tour of the six-hour contest. This time, however, the young Frenchman was on board for the final stint and took the chequered flag to seal Bentley's triumph.

Victory at Circuit Paul Ricard represents a return to winning ways for the M-Sport outfit two years after its most recent triumph, which came at the very same event. Indeed, this is the team's third win at the track since taking its maiden Endurance Cup success there in 2014.

Though it came from pole position, the Bentley squad had to work extremely hard to earn their place on the top step of the podium after six hours of racing. Pepper was passed for the lead at the start by the #4 Black Falcon Mercedes-AMG, but the South African fought back into P1 between two safety car periods to hand over to Kane in the lead.

The British driver also faced stiff opposition and was overtaken by the #563 Orange1 FFF Racing Lamborghini Huracan of Andrea Caldarelli. Kane then made clever use of a safety car to stop for fuel and fresh Pirelli tyres, which allowed him to return to the front of the field once more.

The #107 Bentley remained at the head of the pack as the four-hour mark approached. This meant Gounon, who set the absolute best time during the morning's qualifying session, only needed to bring the car home during the final two hours.

It would not be that simple, however, as a slow stop dropped the #107 Bentley into second position and a full eight seconds behind the #72 SMP Racing Ferrari 488.

Gounon immediately showed his pace, taking significant chunks of time out of Miguel Molina's advantage in the Italian machine. The Bentley was closing on to the rear of the Ferrari, but ultimately did not need to make an overtake as the SMP car was hit with a drive-through for an earlier pit stop infringement.

After Molina had served the penalty with 90 minutes remaining, Gounon held a lead of 14 seconds. The French ace showed impressive maturity to maintain his advantage over the closing stages of the race, resisting the temptation to over-work the car while still pulling away.

When his final pit stop ran without major incident, Gounon was on his way to victory. He extended his advantage over the concluding hour, eventually winning by a hugely impressive margin of 37 seconds.

Second spot went to the #72 SMP Ferrari, an excellent result for the squad following its drive-through penalty and after starting 15th on the grid. What's more, the crew of Aleshin, Rigon and Molina now lead the Endurance Cup drivers' standings.

The podium was completed by the #563 FFF Lamborghini, which snatched the place during the final five minutes. Marco Mapelli was at the wheel and found his way past the #76 R-Motorsport Aston Martin Vantage AMR to secure another top-three for the Chinese outfit.

The Silver Cup class was typically competitive, with several crews contending for the win. The pole-sitting #55 Attempto Racing Audi R8 LMS was eliminated early on, after which the #333 Rinaldi Racing 488 showed very strongly at the top of the order before running into trouble.

The #90 AKKA ASP Mercedes-AMG then assumed the class lead, but the French squad was subsequently hit with a penalty for crossing the white line at pit exit. This allowed the #5 Phoenix Racing Audi R8 LMS to seize P1, but a stellar final stint by Felipe Fraga in the AKKA ASP machine saw the Brazilian re-take the lead with less than 10 minutes left on the clock.

It capped another superb showing by the #90 Mercedes-AMG crew, which secured its second class win of the season following victory at the Monza opener.

In Pro-Am, the all-French AKKA ASP line-up took a popular home victory with its #87 Mercedes-AMG. The crew of Jean-Luc Beaubelique, Mauro Ricci and Jim Pla led for a large portion of the event, but there was no opportunity to relax as the #74 Ram Racing Mercedes-AMG stayed in the hunt until the finish.

Pla remained in command, however, beating Tom Onslow-Cole to secure class honours and ensure a double victory for AKKA ASP at its local event.

The Am Cup category was won in truly commanding fashion by the #188 Garage 59 Aston Martin Vantage AMR, which led from pole and never looked troubled on its drive to victory. Given the length of the race and the on-track incidents that occurred, this was a remarkably cool performance from the British outfit.

It represented a return to the top step for the crew of Chris Harris, Alexander West and Chris Goodwin, whose last triumph was at this event 12 months ago. It also broke a run of four successive wins by the #77 Barwell Motorsport Lamborghini Huracan, which finished second in class after making a late pass on the #488 Rinaldi Racing Ferrari.

The major incident of the race occurred on the opening lap, when the #2 Audi R8 LMS of Ezequiel Perez Companc (Belgian Audi Club Team WRT) and the #444 Ferrari 488 of Florian Scholze (HB Racing) made heavy contact with the barriers at high-speed. Both were attended to quickly by the on-site staff, allowing the race to resume after the safety car period.

There was no such drama for Bentley Team M-Sport. The British squad could relax during the latter stages of the contest as the hugely impressive Gounon built an insurmountable gap. As fireworks lit up the skies over the circuit to mark the race's conclusion, all was calm inside the #107 car.

It sets the squad up perfectly for next month's Total 24 Hours of Spa (25-28 July), which Bentley will tackle with an expanded line-up of four cars as it seeks to conquer the Belgian endurance classic in its centenary year. If their performance at Circuit Paul Ricard is anything to go by, the British brand will be a serious contender for victory at the season's marquee event. 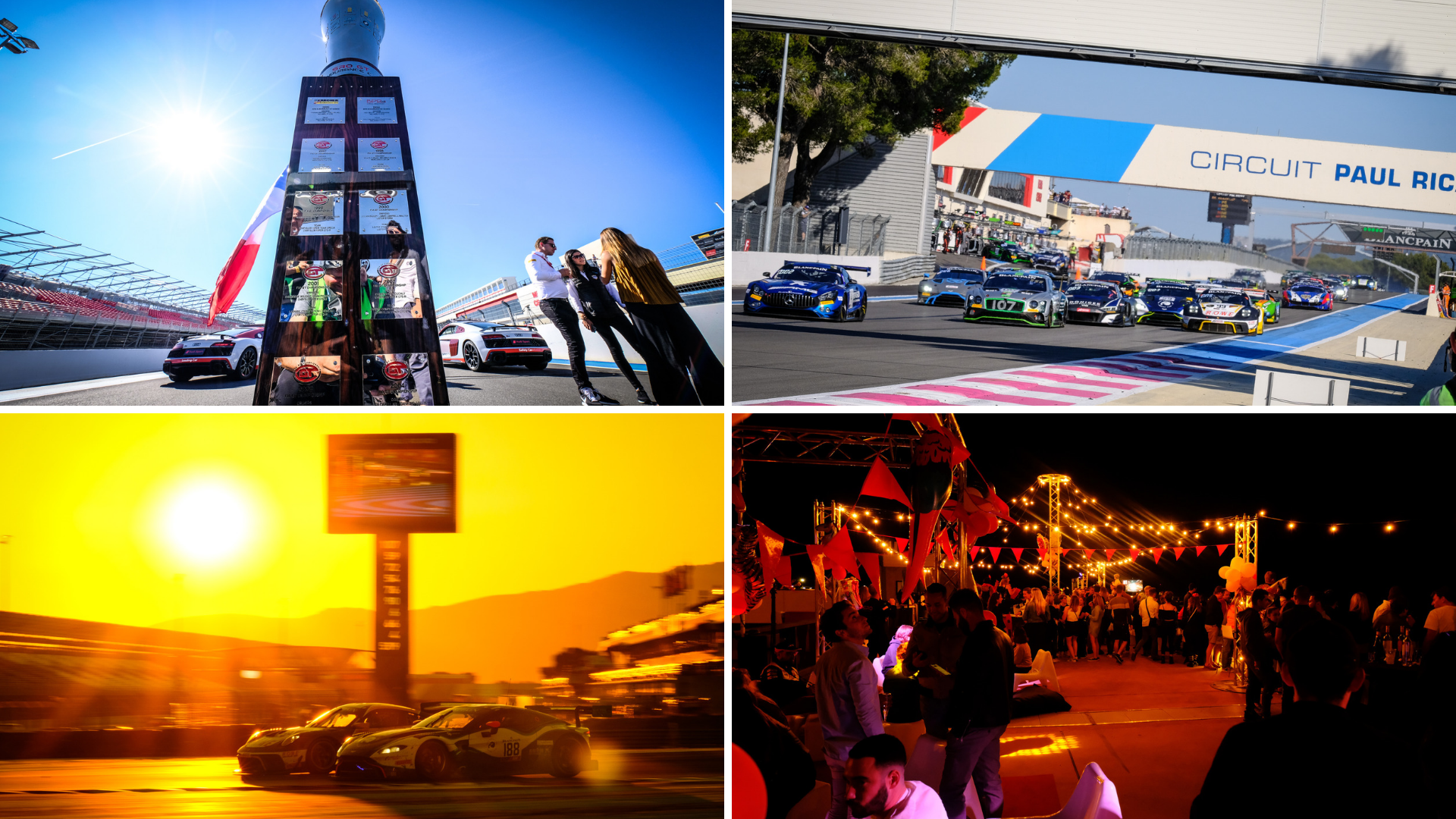 Jules Gounon, #107 Bentley Team M-Sport Continental GT3: “Last year it was so hard talking about losing the victory. The team has done such a great job over the winter, working on the car, and our engineers have done a fantastic job as well. Jordan ran an absolutely amazing stint, Steven went from the lead to the lead – what else can I say? Massive thanks to Bentley, to M-Sport, and to my two teammates.”

Mikhail Aleshin, #72 SMP Racing Ferrari 488 GT3: "We had technical issues at the start of the race after another car hit me during my stint, which meant we took an extra pit stop. We also had the drive-through, so to finish P2 is a great result for SMP Racing and Ferrari."

Andrea Caldarelli, #563 Orange1 FFF Racing Lamborghini Huracan GT3: “So far we've been on the podium at every round, which is a great achievement. The race was really tough and I think we all did an amazing job. The team was mega and the car was really well balanced."

Felipe Fraga, #90 AKKA ASP Team Mercedes-AMG GT3: "The final laps where pretty hectic. We got a drive-through for crossing the pit exit line, which lost us the class lead, but I managed to close the gap to Ivan Pareras in the #5 Audi. As I was getting closer he made a mistake, which was the perfect moment to take back the lead. Thanks to the whole team for their work."

Jean-Luc Beaubelique, #87 AKKA ASP Team Mercedes-AMG GT3: "We had a pretty aggressive strategy. Mauro did the first stint as we were pretty sure that there could be problems at the start, which there were. I did my first stint with the sun in front of me, which was very hard, then I drove at night and that was great. After this we got the job done along with Jim. The car was very good and we are super happy for the team.”

Chris Harris, #188 Garage 59 Aston Martin Vantage AMR GT3: "The new Aston Martin is very easy to drive and really suits this track. We had good traction and, as the tyres degraded, the balance was fantastic. Alex drove brilliantly and Chris [Goodwin] was very steady at the end. I love this circuit and I'm over the moon with the result."