The two 20-minute sessions were staged in dramatically varying weather conditions, with glorious sunshine one moment followed by heavy rain the next. This made qualifying a true test of the drivers' mettle as the 26-car field attempted to pick the perfect moment to post a lap. Ultimately, it was the two Mercedes-AMG squads that mastered this challenge the best.

The opening session began on a damp circuit, with times improving throughout the early minutes. A crash for Diego Menchaca (#555 Orange1 FFF Racing Lamborghini Huracan) brought out a red flag after eight minutes, the Mexican emerging unharmed from a heavy rear impact at turn 1.

But it was Stolz in his #4 Black Falcon Mercedes-AMG who posted a stellar lap to establish himself in provisional pole with just a few moments remaining. Bortolotti then set out to recapture top spot and looked capable of doing so, only to crash on his final fast lap. This brought out a red flag to end the session early, confirming Stolz in P1.

The second session would prove just as dramatic, albeit in different circumstances. It began on a dry surface, but with dark clouds over the circuit rain seemed a certainty. This led to an extremely busy track in the opening moments as drivers endeavoured to set a fast lap before the heavens opened.

Schiller was quickest after the opening few minutes, edging out Nick Foster (#66 Attempto Audi) to secure provisional pole. Then the rain began to fall and, just as it did, Christopher Mies (#2 Belgian Audi Club Team WRT Audi R8 LMS) and Stephane Ortelli (#24 Sainteloc Racing Audi R8 LMS) went off at turn 1. The two Audi machines tangled, bringing out a red flag, and as the rain intensified Schiller was effectively assured pole position.

This represented a major achievement by the German youngster, who will compete for Silver Cup honours this weekend. He will be joined on the front row by Nick Foster, with Maro Engel placing the car he shares with Stolz third.

Pro-Am pole for the second outing was secured by Jim Pla, who completed a standout day for Mercedes-AMG by taking the brand’s fifth pole position from a possible six in his #87 AKKA ASP machine. In the Am Cup category, the lone HB Racing Ferrari 488 secured an excellent 16thoverall for the second outing after judging its lap to perfection.

Sunday will see a pair of 60-minute sprint races take place at the British track and should provide just as much excitement as Saturday’s qualifying exploits. A number of potential race-winners have been left out of position by today's events and will be looking to charge through the field, notably the #88 AKKA ASP Mercedes-AMG of Raffaele Marciello and Vincent Abril which will start both races from sixth.

The opening race gets underway at 12.10, with the second run scheduled for a 16.35 start. It promises to be an explosive start to a new era as Blancpain GT World Challenge Europe contests its maiden round. 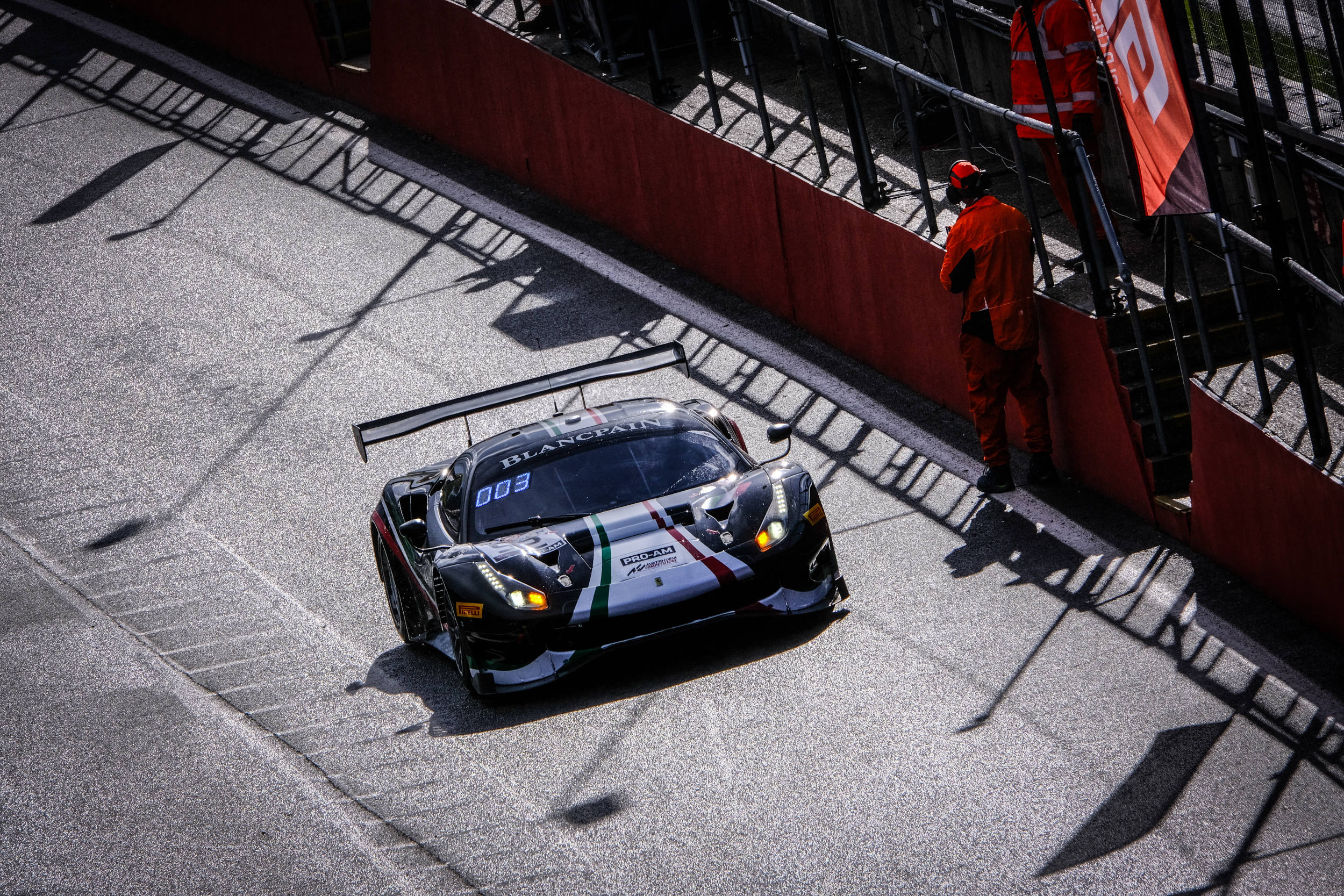 Luca Stolz, #4 Black Falcon Mercedes-AMG: “It was not the easiest qualifying given the conditions. We started on wet tyres and that was not so easy, because it looked like the track was much quicker on the slicks. I went to change, then there was a red flag. I thought at that point we weren't in the game anymore because we were P24. My engineer was a bit nervous! But the red flag helped as the track dried up and in the end the team decided really late to go to new tyres. This was the key because it allowed me to do a good lap. It still wasn't easy as there were some wet parts, especially the last corner. I finished the last Sprint Cup race on pole and now I'm on pole for Blancpain GT World Challenge Europe, so this feels really good.”

Fabian Schiller, #90 AKKA ASP Team Mercedes-AMG: “It’s a great result. We didn't really expect to be on pole. In qualifying I had my first new set of Pirelli tyres this year, so it was quite a surprise! Conditions played into our hands, but we have a very good team. Nico [Bastian] came to my car after Q1 to tell me where the wet and dry patches were. That definitely helped as I could go out there and attack straight away. It was a good lap and I'm really happy with the result.”

Nico Bastian, #89 AKKA ASP Team Mercedes-AMG: “I can do exactly the same recap as Luca! I also started on rain tyres, my engineer also got nervous, we also put slicks on, but I think we went to the second set a little too early. I think I missed a bit there, but I am satisfied with pole in Silver and P3 overall. It's a nice starting position at Brands Hatch. It is difficult to overtake so if you survive the first corner in P3 you have a good chance to be on the podium.”

Louis Machiels, #52 AF Corse Ferrari 488: “I am very happy because I have never been here before! This is my first time at Brands Hatch and it was very difficult to find the right moment in qualifying. It's good to be here and good to be a Ferrari among these Mercedes guys!”

Jim Pla, #87 AKKA ASP Team Mercedes-AMG: “Our team has done a really good job today and so have the drivers. I was struggling a lot with the tyres on my first lap and then the rain came towards the end, but we still managed to be on pole in Pro-Am. I'm not happy with my lap, but we're in a good position for the race.”