The stars of the Blancpain GT Series descended on London’s Old Billingsgate Grand Hall last night (24 November) as the annual SRO Motorsports Group awards ceremony brought the curtain down on a thrilling 2018 season.

Saturday’s event was attended by representatives from across the spectrum of SRO series and saw the champions of 2018 rewarded for their efforts at a spectacular evening of celebration.

Old Billingsgate Grand Hall provided the ideal venue for the traditional end-of-year ceremony. Situated at the heart of the city, overlooking the River Thames, the Grade II listed building combines a stunning example of London’s architectural history with contemporary chic.

Raffaele Marciello and AKKA ASP took home the most coveted prizes of the evening, winning the overall drivers’ and teams’ titles after sharing a remarkable year with their Mercedes-AMG.

It represented a first major honour at this level for both, with the Italian triumphing in only his second season of GT racing and Jerome Policand’s squad establishing itself as a world-leading operation. AKKA ASP’s success was achieved using TM Performance brake pads and the team received a cheque from the company to recognise their accomplishment.

There were further awards for the class champions who triumphed in 2018. In the Silver Cup category, the overall and Sprint Cup titles went to Nico Bastian and Jack Manchester (AKKA ASP Mercedes-AMG) after an impressively consistent showing across the campaign. In the Endurance Cup, Silver honours were awarded to the #54 Emil Frey Jaguar crew of Alex Fontana, Adrian Zaugg and Mikael Grenier.

Pro-Am also saw one crew scoop both the overall and Sprint Cup titles. Markus Winkelhock and Nyls Stievenart received their rewards for an excellent 2018 campaign, while the Sainteloc Racing Audi squad for which they drove took home the teams’ trophy. In the Endurance Cup, drivers’ honours went to the Strakka Racing Mercedes-AMG trio of Nick Leventis, Chris Buncombe and Lewis Williamson, while the accomplished AF Corse outfit took home the teams’ title.

Finally, Am Cup honours for the overall and Endurance Cup championships went to Barwell Motorsport and its pairing of Adrian Amstutz and Leo Machitski, who also took class honours at the Total 24 Hours of Spa with their #77 Lamborghini. Along with overall champion Marciello, all of this year’s Endurance Cup drivers’ title winners were presented with a Blancpain watch to mark their achievements.

Saturday evening’s event saw many successes celebrated as a total of 17 drivers’ champions were rewarded for the efforts in 2018. Six teams took home trophies, with five different automotive manufacturers represented among the title-winners.

It was not just the champions who were crowned in London. Now in its third year, the Sean Edwards Trophy is awarded to a driver under the age of 21 who has shown outstanding attributes during the season.

Presented in memory of the 2006 FIA GT3 European Champion and chosen by the late racer’s mother, Daphne Mckinley, this year’s recipient was Sheldon van der Linde, whose campaign was highlighted by an exceptional third-place overall finish at the Total 24 Hours of Spa. The 19-year-old receives the coveted Lalique Trophy and will be awarded 20 sets of Pirelli tyres for the 2019 season.

The TM Performance Pit Stop Challenge recognised the crew that performed the fastest stops during the 2018 Blancpain GT Series Sprint Cup. Once again, it was the rapid work of Belgian Audi Club Team WRT that secured the award, which was accepted by Cedric Darrimont and Pierre Emmanuel Cary.

While the 2018 championships are complete, a final race remains on the calendar with the inaugural Bapco Bahrain GT Festival set to take place next weekend (30 November 1-December) at the Bahrain International Circuit. A number of Blancpain GT Series competitors will tackle the FIA GT Nations Cup contest, including title-winning squads AKKA ASP, Belgian Audi Club Team WRT and AF Corse, while AKKA ASP and Sainteloc Racing will be part of the GT4 International Cup field.

On Saturday evening, however, the emphasis was firmly on celebrating what has been achieved in 2018, as well as looking forward to even bigger and better things in the year that lies ahead.

Raffaele Marciello, AKKA ASP Team Mercedes-AMG: “I think I can be really satisfied with this season. After the summer break we showed that we were able to win and be the most consistent. It’s an honour to work with Jerome  [Policand] because he is so passionate about motorsport and AKKA ASP is a big family, so I am very proud to win with them. I am also grateful to Mercedes-AMG. They took me on after my single-seater career and I am very happy working with them. The season has just finished, but already I can’t wait to be back on track! Next year we have to win some big races. We are really good over a championship but perhaps miss some performance at a single event, so I’d like to win the Total 24 Hours of Spa. We will take December to rest and then in January we will start again.”

Jerome Policand, AKKA ASP Team Mercedes-AMG: “To be honest, I never expected this! My goal was to be on the overall podium, because I thought we were not yet completely ready. During the weekends we concentrated on ourselves and tried to always score points. We did not dominate at all. To win a championship, you need to have a different perspective. Sometimes you need to sacrifice a place and make sure you take the points. It’s very difficult because we are all fighters. The drivers are all quick and they want to win, but there are so many cars on the track and it is so easy to get a penalty. You have to always concentrate, keep calm and do your job. I am proud we achieved that this season.”

Stephane Ratel, SRO Motorsports Group founder & CEO: “Firstly, I must offer my congratulations to all of those who were recognised this evening. Our series grow more competitive by the year and so to be crowned champion is a tremendous achievement. This awards ceremony is the perfect way in which to conclude a year of hard work and celebrate the successes of our competitors. Indeed, I am grateful to everyone who has been a part of our championships in 2018. We have seen great developments in many areas and it is thanks to the involvement of such high-quality participants that we never stop improving. I wish everyone an enjoyable winter break and look forward to another fantastic year in 2019.” 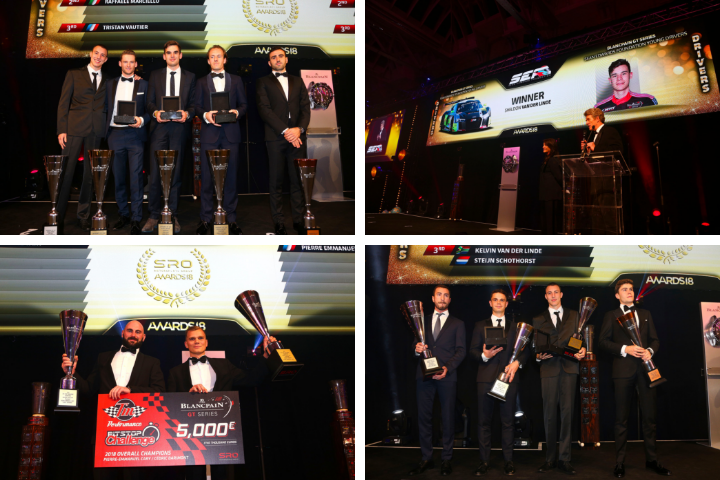