The Italian venue played host to a number of firsts for the 2018 season: Chris Mies and Alex Riberas became the first crew to sweep a Sprint Cup weekend; Nicolas Jamin earned the first overall pole position for a Silver Cup entry; while a torrential downpour on Friday saw drivers undertake their first wet running of the campaign.

The rain stayed away for the remainder of the weekend, and while there was no shortage of on-track action Misano proved to be a straightforward event. But, with the season-defining Total 24 Hours of Spa on the horizon, this might well have been the calm before the inevitable storm. 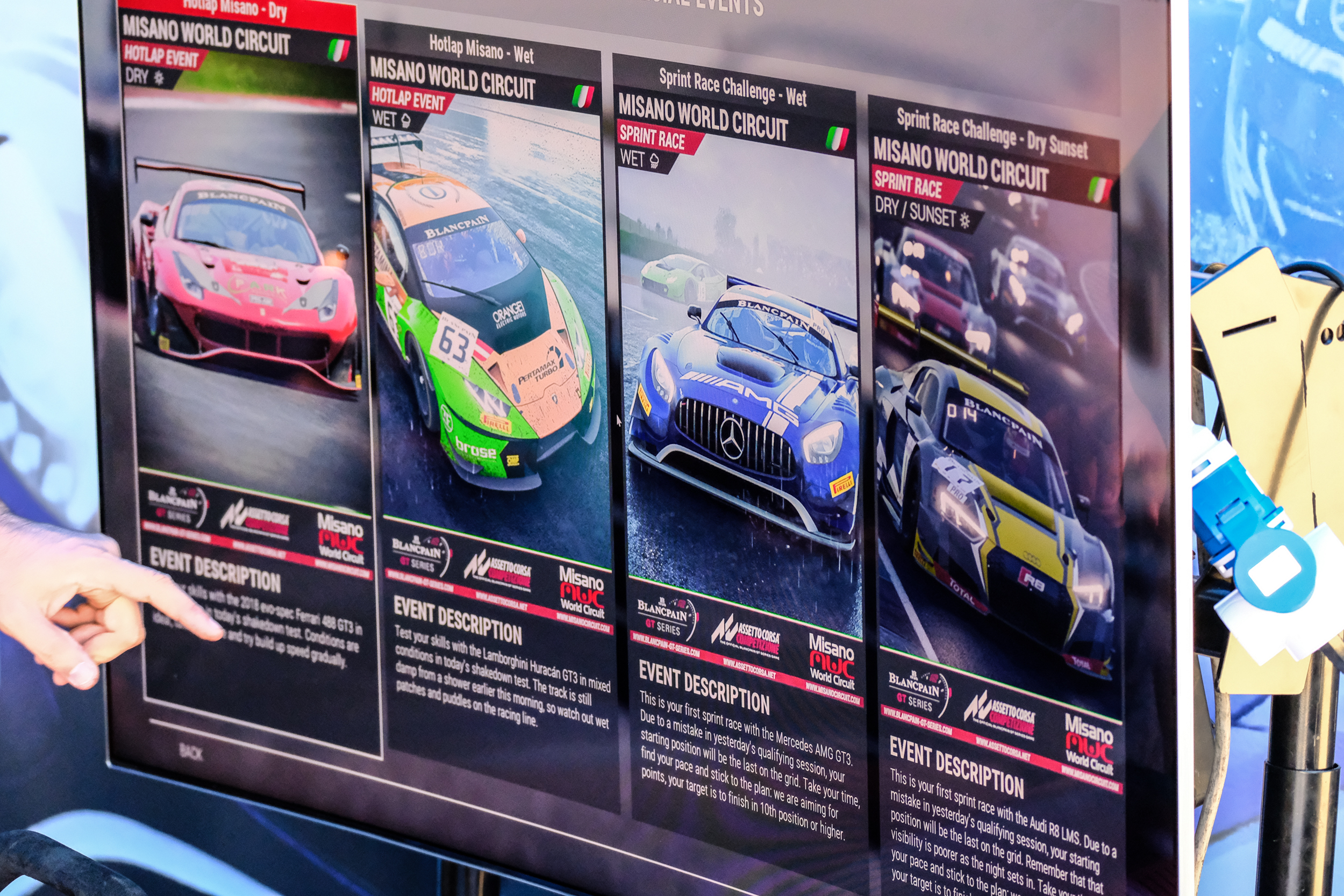 Aside from events taking place on the circuit, the biggest point of interest at Misano came courtesy of Assetto Corsa Competizione. Developed by Kunos Simulazioni, this eagerly awaited sim racing title will become the official video game of the Blancpain GT Series when it gets its full release next year.

Though it is still a work in progress, the game’s developers brought a preview to Misano to give the public a chance to see the latest version for themselves. Dedicated cockpits were installed in the paddock, while the development team was on hand to hear any feedback.

Among those to take it for a test drive was Attempto Racing driver and keen sim racer Kelvin van der Linde. The South African was impressed, making particular note of the weather simulation and night driving aspects of the new game. 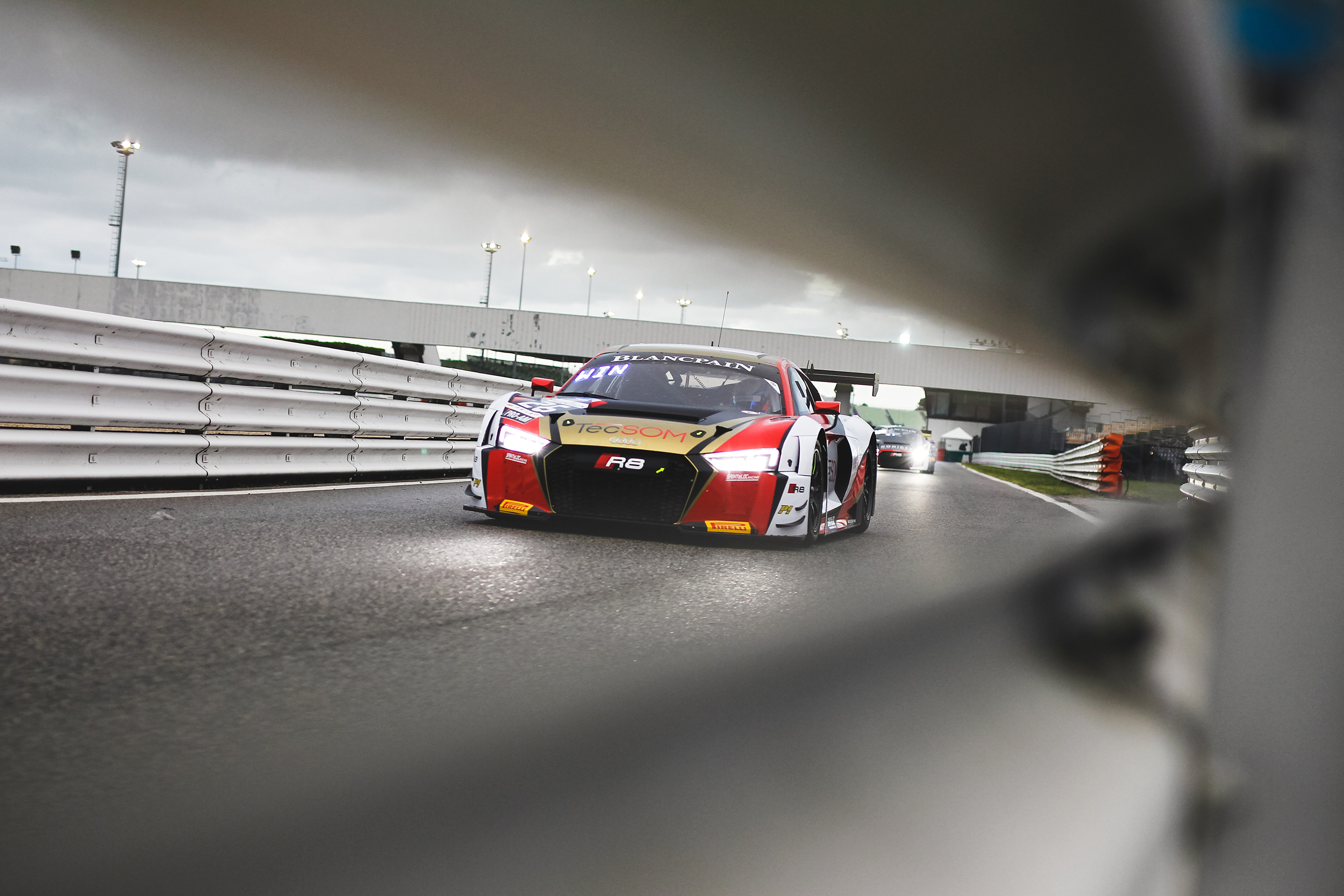 The #26 Sainteloc Racing Audi of Nyls Stievenart and Markus Winkelhock scored a third successive Sprint Cup victory in the Pro-Am class at Misano. Their performance in the weekend’s second race was particularly impressive, with 18-year-old Stievenart coming home ninth overall among a competitive group of drivers.

It marks a considerable improvement from the #26 crew. In the season’s early races, the #39 TP-12 Kessel Racing Ferrari of Piti Bhirombhakdi and Carlo van Dam was dominant in the Pro-Am class, but the momentum has now swung towards the Sainteloc pairing.

Though he is the youngest driver on the grid, Stievenart in particular has made clear progress alongside the highly experienced Winkelhock. The Audi duo now trail their class rivals in the Sprint Cup by just six points and lead the overall Pro-Am classification. 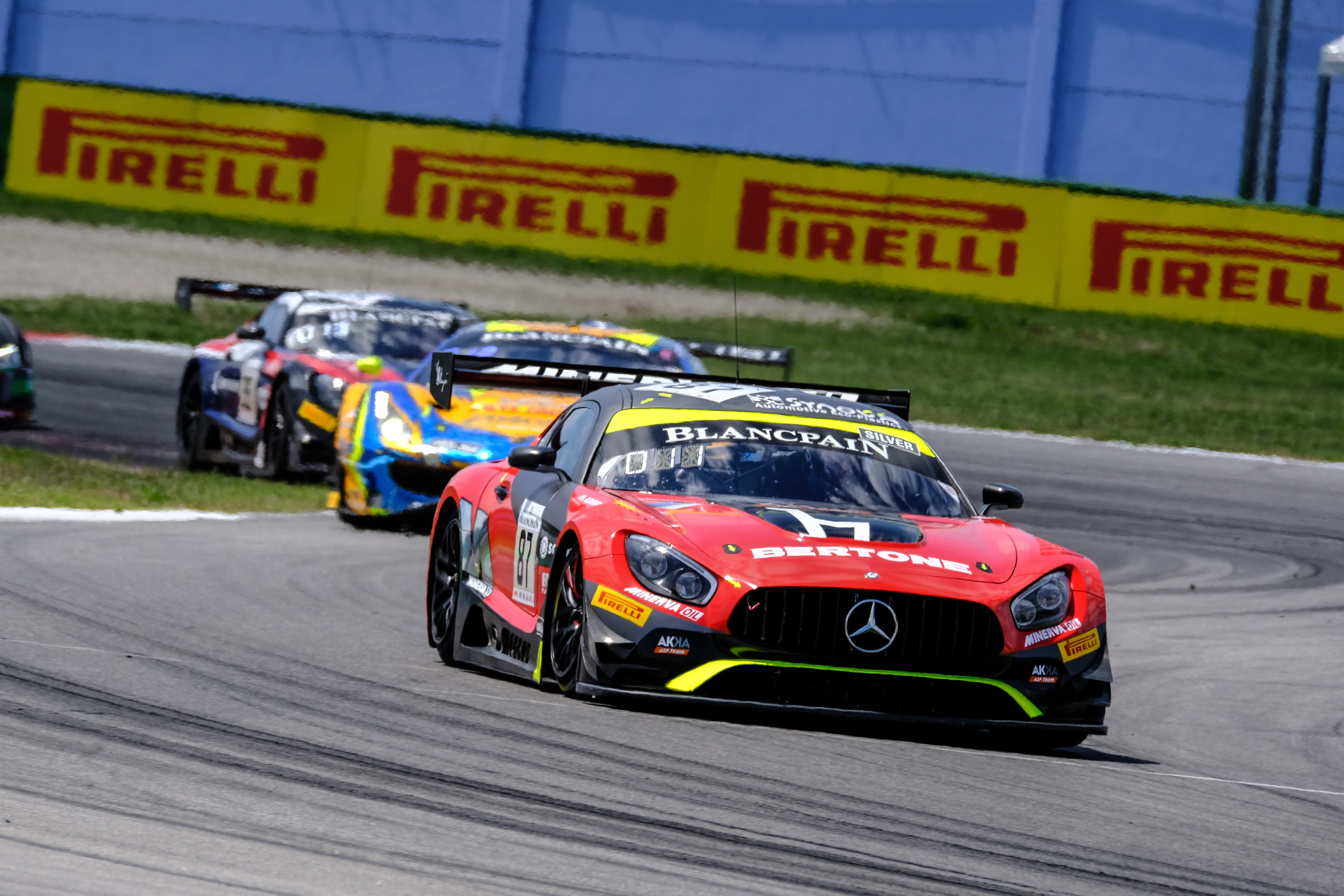 The young Frenchman is back in Europe this season after a successful spell on the U.S. junior single-seater ladder. He has already shown well during the early rounds of 2018, but Misano saw him contending at the very front of the field for the first time.

Jamin took outright pole for race 1 with a blistering lap aboard his Mercedes-AMG GT3. There was no shortage of pressure at the start of the race as he lined up alongside the #1 Belgian Audi Club Team WRT entry, but Jamin held his advantage and was able to pull away at the head of the field.

But disaster struck, with an electrical problem forcing him out of the race before crewmate Denis Bulatov had even had a chance to take the wheel.

Jamin and Bulatov were fast again in race 2, with the Russian making good progress in the opening stint before handing over to Jamin in P6. The Frenchman once again had the pace to fight the front-runners and made a crucial pass on the #17 WRT-Audi to secure the Silver Cup class win.

At a circuit that suited Mercedes-AMG equipment, Jamin made his mark on the Blancpain GT Series. 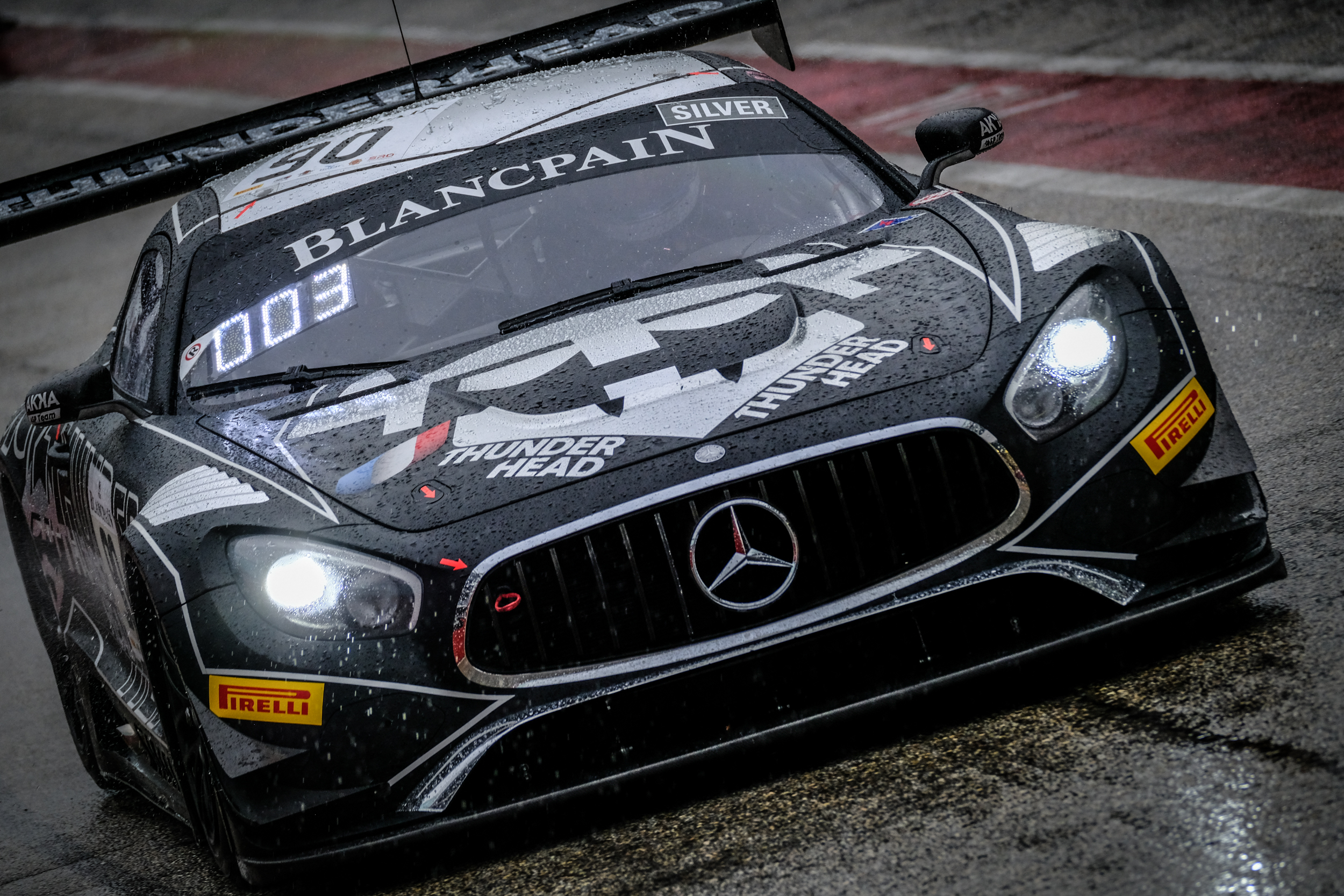 The Jamin-Bulatov pairing at AKKA ASP Team was part of a very competitive Silver Cup field at Misano. Eight cars were competing for class honours at the Italian venue, with some able to challenge at the top of the overall classification

Nico Bastian and Jack Manchester took race 1 in their AKKA-Mercedes after a stellar first stint from the German driver, who looked very much at home at the head of the field. Manchester continued his rapid progress since joining the series this year by fending off a late charge from the #54 Emil Frey G3 Jaguar for the class win.

Jamin overhauled the #17 WRT-Audi of Stuart Leonard and Sheldon van Der Linde in race 2, giving Mercedes-AMG a clean sweep of the Silver Cup class. With Audi machinery triumphing in both Pro and Pro-Am, it was an important result for the rival manufacturer.

NO TRACK TIME? NO PROBLEM FOR BORTOLOTTI 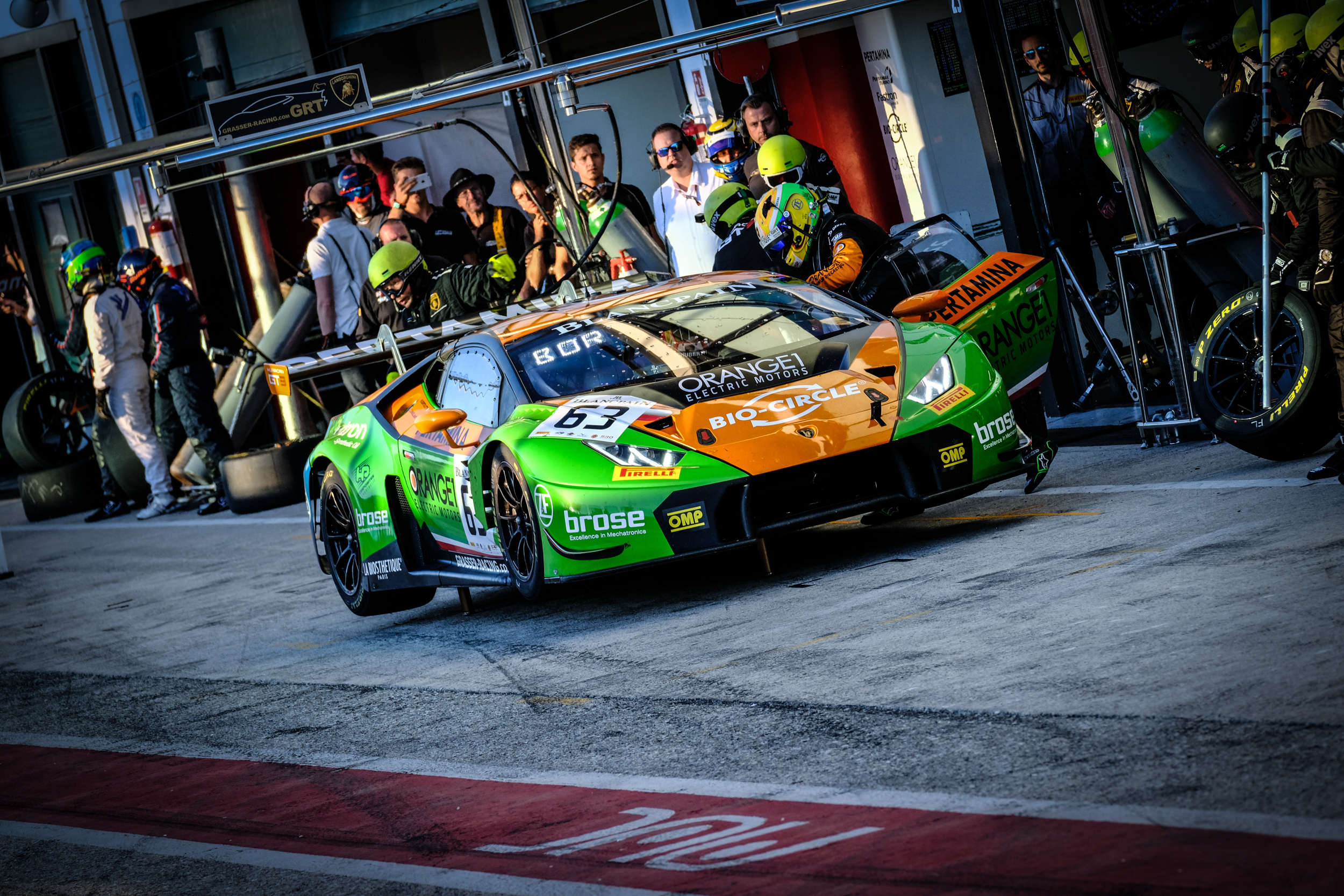 Practice is an essential part of any racing weekend. But, when circumstances prevent a driver from completing any running, they just have to make the best of it.

That is exactly what Grasser Racing ace Mirko Bortolotti had to do at Misano. Heavy rain during the first practice session kept the #63 Lamborghini Huracan GT3 in the garage, while crewmate Christian Engelhart managed only five laps in the second session before a technical fault sidelined the car.

This meant Bortolotti entered his qualifying session on Saturday afternoon having not completed a single lap of the Misano circuit during the weekend. With that in mind, the fact that he managed to put the Grasser machine fourth on the grid for the second race is all the more impressive.

The #63 crew followed this up with a third-place finish in race 1, ending a long spell off the podium for the reigning overall and Endurance Cup champions. 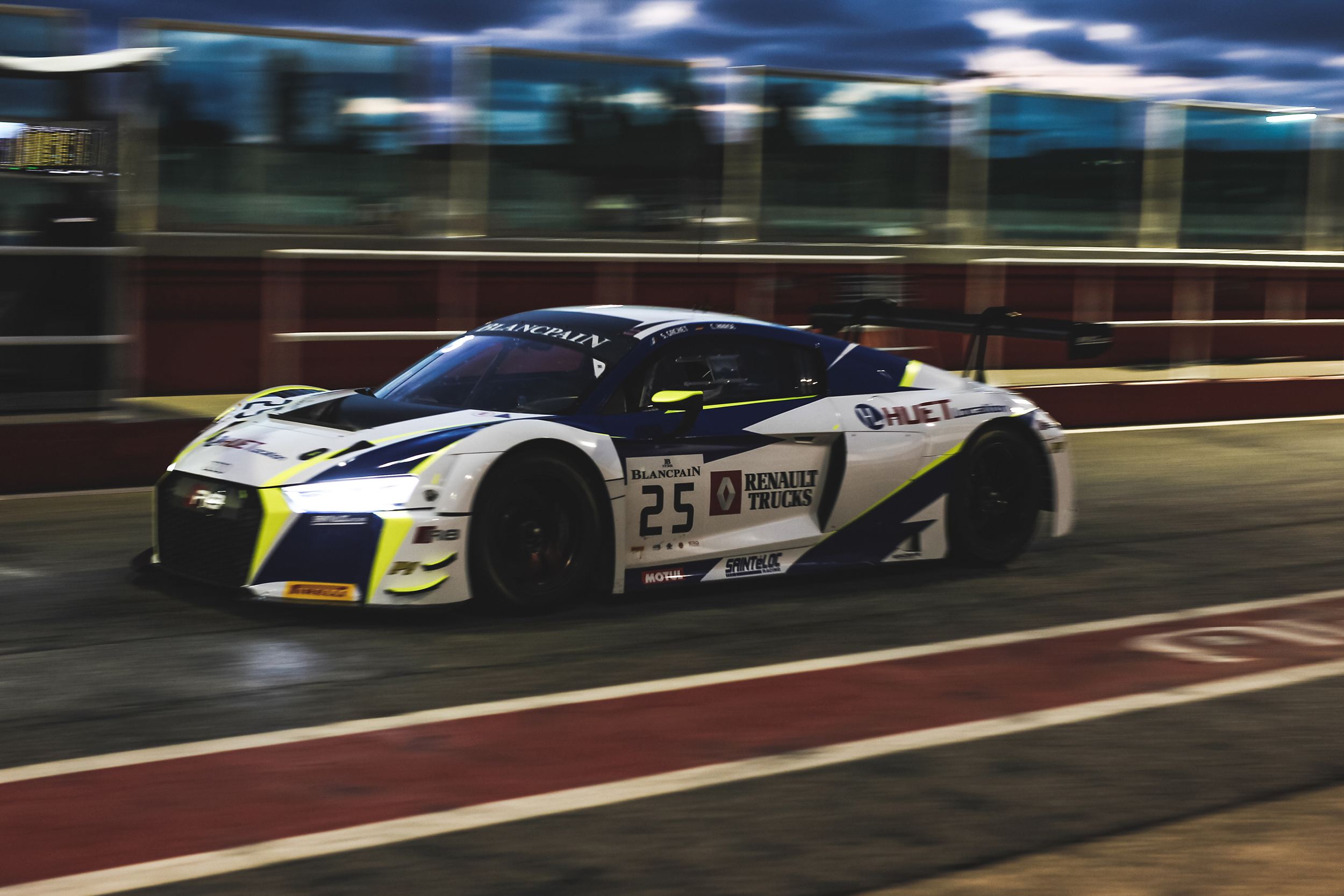 While the #26 Sainteloc-Audi secured a double class win, the sister #25 R8 LMS also enjoyed a strong weekend at Misano. Indeed, a third-place finish in race 2 represented a season-best result for the crew of Christopher Haase and Simon Gachet.

Notably, this was the first top-three finish for Gachet in the Blancpain GT Series. For the more experienced Haase, it marked a return to the podium for the first time since he claimed victory for Sainteloc Racing at last year’s Total 24 hours of Spa.

For both drivers and their team, it was a case of hitting form at the right time, with this year’s 24 Hours now just over four weeks away.

PLENTY OF RACING REMAINS IN 2018

With six out of 10 races complete, you might think that we’re more than halfway through the 2018 Blancpain GT Series season. That is true enough if you are simply ticking off the events, but in terms of distance it is not entirely accurate.

Let’s break it down. There have been 18 hours of racing thus far in 2018: six in the Sprint Cup and 12 at Endurance events. That is still some way short of the halfway mark, with a 24-hour race coming up next month.

In total, there will be 49 hours of racing during the 2018 Blancpain GT Series season. So, the championship will actually reach its halfway point at exactly six and a half hours into the Total 24 Hours of Spa.

If you feel like setting a reminder to mark the occasions, that’s 23:00 CET on Saturday 28 July.

The #1 Belgian Audi Club Team WRT crew of Chris Mies and Alex Riberas entered the Misano weekend leading the Endurance Cup and overall standings, though they were still a little way off the top of the Sprint Cup classification.

Their double win has changed that. Mies and Riberas now lead all three drivers’ championships, while Team WRT top the overall and Sprint Cup standings. The only exception is the Endurance Cup, where they sit second to Emil Frey Racing.

On the drivers’ front, Mies and Riberas have earned themselves a useful advantage. In the Sprint Cup they hold a 23-point lead over teammate Stuart Leonard and the #88 AKKA-Mercedes duo of Raffaele Marciello and Michael Meadows, while in the overall classification they are 24 points clear over WRT teammate Dries Vanthoor.

But, as Mies was keen to point out, the complexion of the championship could change dramatically during the Total 24 Hours of Spa. With points awarded at the six and 12-hour marks, as well as the finish, their place at the top of the overall standings is far from secure.

With Misano complete, the 70thedition Total 24 Hours of Spa is now the full focus of the entire Blancpain GT Series community. Preparations for the race will continue at next week’s official test day (3 July), which will see drivers and teams reacclimatising to the iconic Belgian circuit. The full entry list is also set to be revealed during the test, which promise to build anticipation for the annual endurance classic even further.