Skip to Main Content
What could be nicer than a few days in the summer sun on Italy’s Adriatic coast?

But next weekend will be anything but a holiday for the competitors in the Blancpain GT Series. Following back-to-back Endurance Cup events, attention will shift back to short-format Sprint racing when a closely-matched field of 22 cars tackles the 4.2km Misano World Circuit Marco Simoncelli.


With little over a month remaining before the Total 24 Hours of Spa, the meeting takes on added significance by providing teams and drivers with a final chance to flex their competitive muscles before the most important event of the year.

Competition is especially fierce in the Pro class, where every car entered is a genuine contender for a spot on the podium. And, with an expanded Silver Cup grid and the always-entertaining Pro-Am category also on-track, action is guaranteed.

Fresh from their maiden Blancpain GT Series win at the Circuit Paul Ricard 1000km, the Emil Frey Racing squad will travel to Misano with renewed confidence in their Lexus RC F GT3.

Though their first success with the car came in an Endurance Cup event, the Swiss outfit have shown impressive single-lap pace this term and will be bullish about their chances in the one-hour Sprint format races.

Victory at Circuit Paul Ricard has pushed the #14 Emil Frey Lexus crew of Albert Costa and Christian Klien into contention for the overall Blancpain GT Series title, while the #114 machine of Stephane Ortelli and Norbert Siedler has been equally impressive since the team made a major breakthrough at Silverstone. They will head to Italy with added confidence and even greater incentive to perform.

If the Emil Frey squad are to contend for titles this term, they will need to overcome the might of Belgian Audi Club Team WRT. The Badour-based outfit leads the overall teams’ and drivers’ championships and also top the Sprint Cup standings, with the Audi R8 LMS particularly well known for its ability to win short-distance races.

Their Sprint Cup line-up remains formidable, with two Pro class cars set to compete at Misano. Alex Riberas and Christopher Mies will once again pilot the #1 Audi R8 LMS, while Dries Vanthoor and Will Stevens take their usual place in the #2 machine.

The French squad AKKA ASP Team are also challenging for the overall title. The French outfit have been impressively consistent this term and have put Mercedes-AMG within striking distance of its fierce rival Audi at the top of the standings.

Raffaele Marciello leads the line-up for the AKKA squad and pairs with Michael Meadows in the #88 car, while Nicolas Jamin and Felix Serralles share the #87 Mercedes-AMG.

Since winning the opening event of the year Grasser Racing have not returned to the podium in 2018. They will hope to take their Lamborghini Huracan GT3 back to the top step on home turf, with three cars entered in the Pro class.

Reigning champions Mirko Bortolotti and Christian Engelhart lead the way in their #63 machine, with Ezequiel Perez Companc and Andrea Caldarelli aboard the #19 Huracan GT3 and Loris Hezemans paired with Franck Perera in the #82.

A further trio of Audi R8 LMS entries complete the Pro field. The #55 Attempto Racing crew of Steijn Schothorst and Kelvin van der Linde remain strong contenders for the Sprint Cup title having bagged a win at the Zolder season-opener and a podium at Brands Hatch. The sister #66 car of Pieter Schothorst and Pierre Kaffer is yet to score a headline result in 2018, but their R8 LMS has shown flashes of pace this term.

Finally, the Sainteloc Racing squad will field their #25 Audi R8 LMS for experienced campaigner Christopher Haase and his young teammate Simon Gachet. They complete a hugely competitive Pro class in which every car has the ability to claim victory at Misano.

The Silver Cup class will enjoy an expanded field next weekend, setting up an intriguing contest in which eight cars will fight for top spot.

Having previously competed in the Pro category, reigning Sprint Cup champion and current points leader Stuart Leonard will be on Silver Cup duty at Misano.

Driving the #17 Belgian Audi Club Team WRT entry, Leonard will be joined by regular Endurance Cup teammate Sheldon van der Linde. The young South African is set to make his first Sprint outing of the year and completes a formidable line-up in the #17 machine.

Belgian Audi Club Team WRT will be represented by a second Silver Cup entry at Misano, with the #3 R8 LMS returning to the fray with a brand-new driver line-up.

Belgian racer Adrien De Leener returns to the Blancpain GT Series following a two-year absence, having most recently contested the Total 24 Hours of Spa for the WRT squad in 2016. Alongside him will be 18-year-old Swiss rookie Ricardo Feller, who makes his series debut for the Belgian outfit.

At this season’s Endurance Cup rounds, the Silver Cup benchmark has been set by the Emil Frey Jaguar crew. The #54 machine will make its first Sprint Cup appearance of 2018 at Misano, with Alex Fontana and Michael Grenier taking the wheel of the venerable G3 Jaguar and hoping to display the same kind of pace.

Consistent podium finishes have sent the AKKA ASP Team to the top of the Silver Cup standings, and the #90 Mercedes-AMG crew of Jack Manchester and Nico Bastian will be targeting more of the same at Misano. As ever, the AKKA squad will also run the #35 SMP Racing-backed machine for Vladimir Atoev and Aleksey Korneev.

Team Parker Racing are set to field their #31 Bentley Continental GT3 for Josh Caygill and Aron Taylor-Smith, who scored their maiden class win last time out at Brands Hatch, while French squad 3Y Technology will campaign their BMW M6 GT3 for Lukas Moraes and Andrew Watson. The latter is back in a BMW for Sprint Cup duty following an impressive Endurance Cup display at Circuit Paul Ricard with the Garage 59 McLaren squad.

An extremely competitive Silver Cup field is completed by the Audi Sport Slovakia squad with their R8 LMS. Jirko and Christian Malcharek will pilot the #21 machine, making their first appearance as a father-son duo in the Blancpain GT Series Sprint Cup.

In the Pro-Am class, TP 12-Kessel Racing have won three out of four Sprint Cup races this year thanks to Piti Bhirombhakdi and Carlo Van Dam. Combining speed with consistency, the #39 Ferrari 488 GT3 should once again prove to be a formidable opponent at Misano.

Their challenge will come from another strong line-up, with Audi stalwart Markus Winkelhock partnering French youngster Nyls Stievenart aboard the #26 Sainteloc Racing R8 LMS. The pair will be hoping to repeat their breakout result at Brands Hatch, where they finally toppled Bhirombhakdi and Van Dam to secure a maiden class win.

On-track action at Misano begins on Friday, with free practice sessions taking place at 16.20 and 20.10. Drivers will undertake qualifying for both races on Saturday, with the sessions running back-to-back from 13.50 local time.

Saturday’s race will get underway at 19.40, while Sunday’s contest is scheduled to begin at 14.00. Both will last for 60 minutes and pay equal championship points.

A number of support events will also be on-track at Misano – including the GT4 European Series, Lamborghini Super Trofeo, Smart EQ Fortwo e-cup and Blancpain GT Sports Club – ensuring a full programme of high-octane entertainment at the Italian venue.
____ 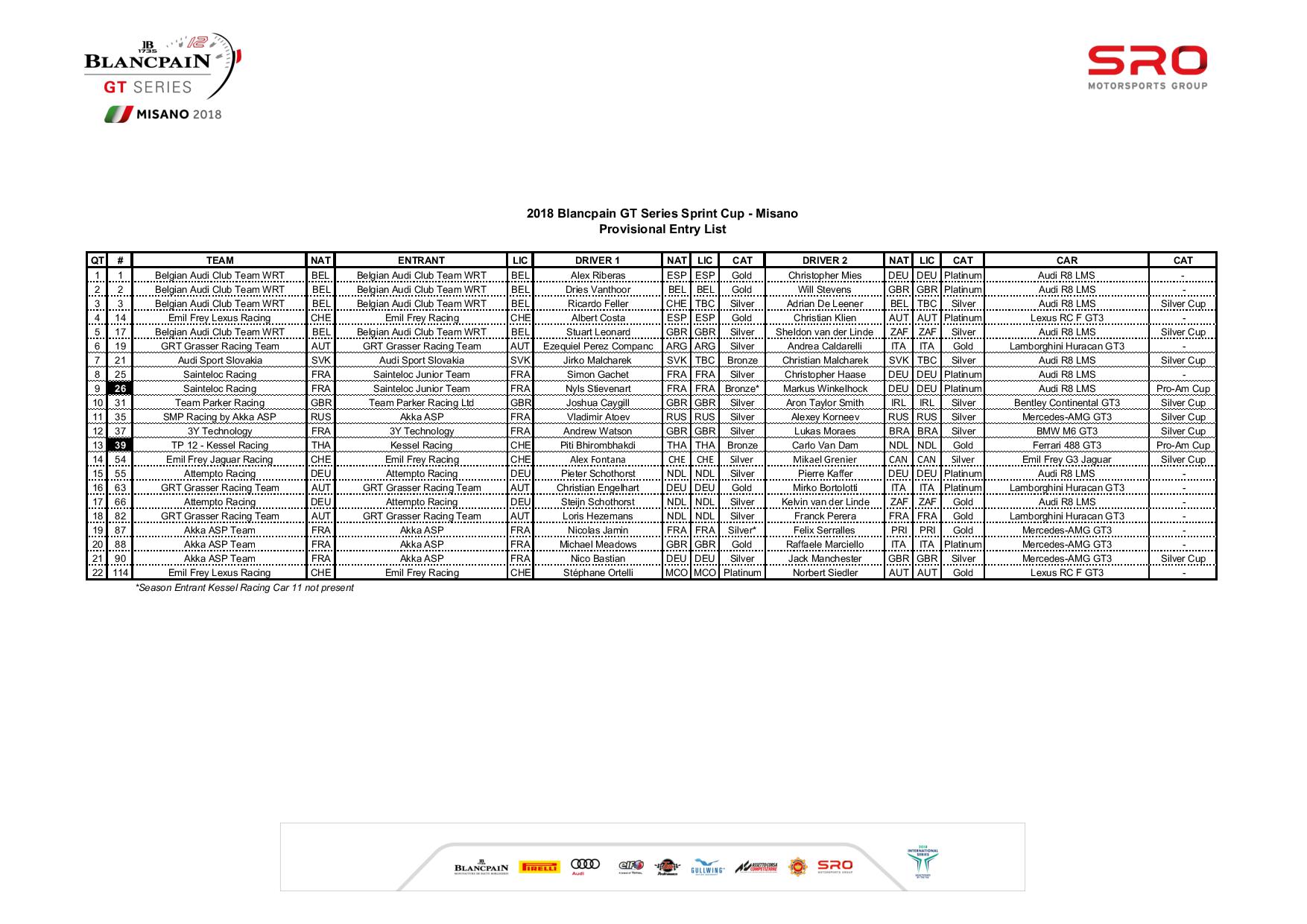