The Blancpain GT Series made its annual visit to Monza last weekend, where sizzling temperatures amid the scenic Italian parkland were topped only by the heat of the competition.

Sunday’s three-hour race may have been the opening round of this year’s Endurance Cup, but there was never an opportunity to cool down. The on-track action was relentless, with the eventual destination of the winners’ trophy never seeming certain.

For much of the race, local favourite Ferrari looked to be on course for a popular victory. The #72 SMP Racing car of Davide Rigon, Miguel Molina and Mikhail Aleshin started from pole and led for much of the first two hours.

But, despite a spirited effort by the Ferrari, it was German machinery that dominated the podium as the Belgian Audi Club Team WRT squad led home the Mercedes-AMG GT3s of Strakka Racing and Black Falcon respectively.

This was the first win at the historic Italian venue for Audi and the WRT outfit. With Monza having been part of the Blancpain GT Series calendar since the inaugural season in 2011, the victory was a long time coming.

The #1 crew of Christopher Mies, Alex Riberas and Dries Vanthoor played a canny game, placing all of their effort into the final stint of the three-hour race. After Mies and Riberas had navigated the first two hours safely, Vanthoor took over for the run to the flag and fought his way to victory.

At last, he and his teammates had a chance to cool off with a champagne shower on the top step of the podium. 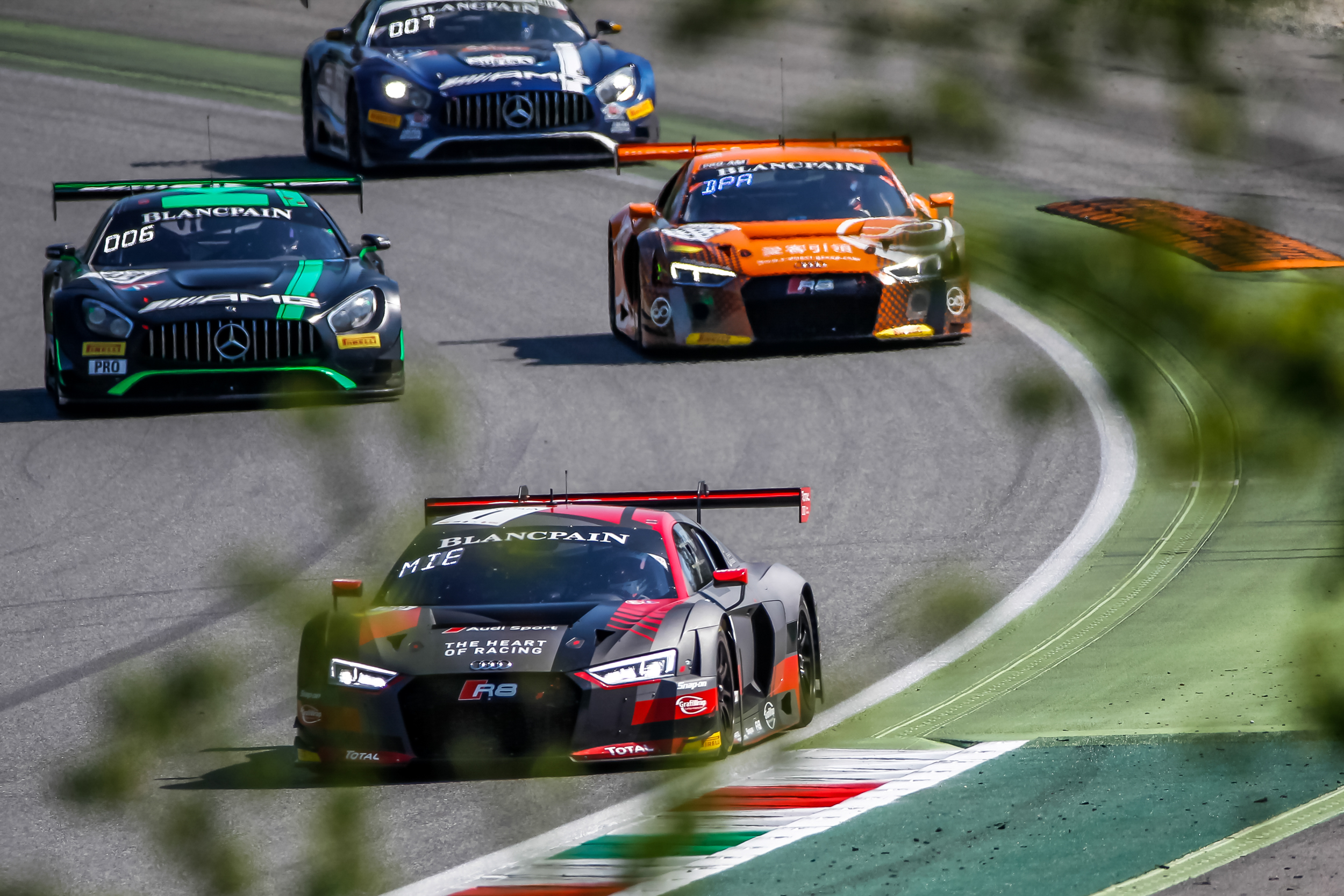 Ultimately, Sunday’s race was decided by a fierce battle between Vanthoor and Maxi Götz in the Strakka-Mercedes.

The first skirmish saw Vanthoor catch the #43 machine and pass the German driver, but he was instructed to hand the position back for exceeding track limits.

But their fight was far from over. After getting a good run out of the Parabolica, Vanthoor made efforts to pass the Mercedes on both sides of the pit straight. Götz moved left and squeezed the Audi, which drew immediate attention from the stewards.

The decision to penalise Götz was therefore not particularly contentious and he was soon ordered to allow Vanthoor past. This punished the Strakka driver for his move, but also allowed the possibility of further on-track competition between the two.

Afterwards, both drivers seemed happy to accept their penalties, while Vanthoor was also quick to point out that he didn’t believe Götz’s move to have been malicious. 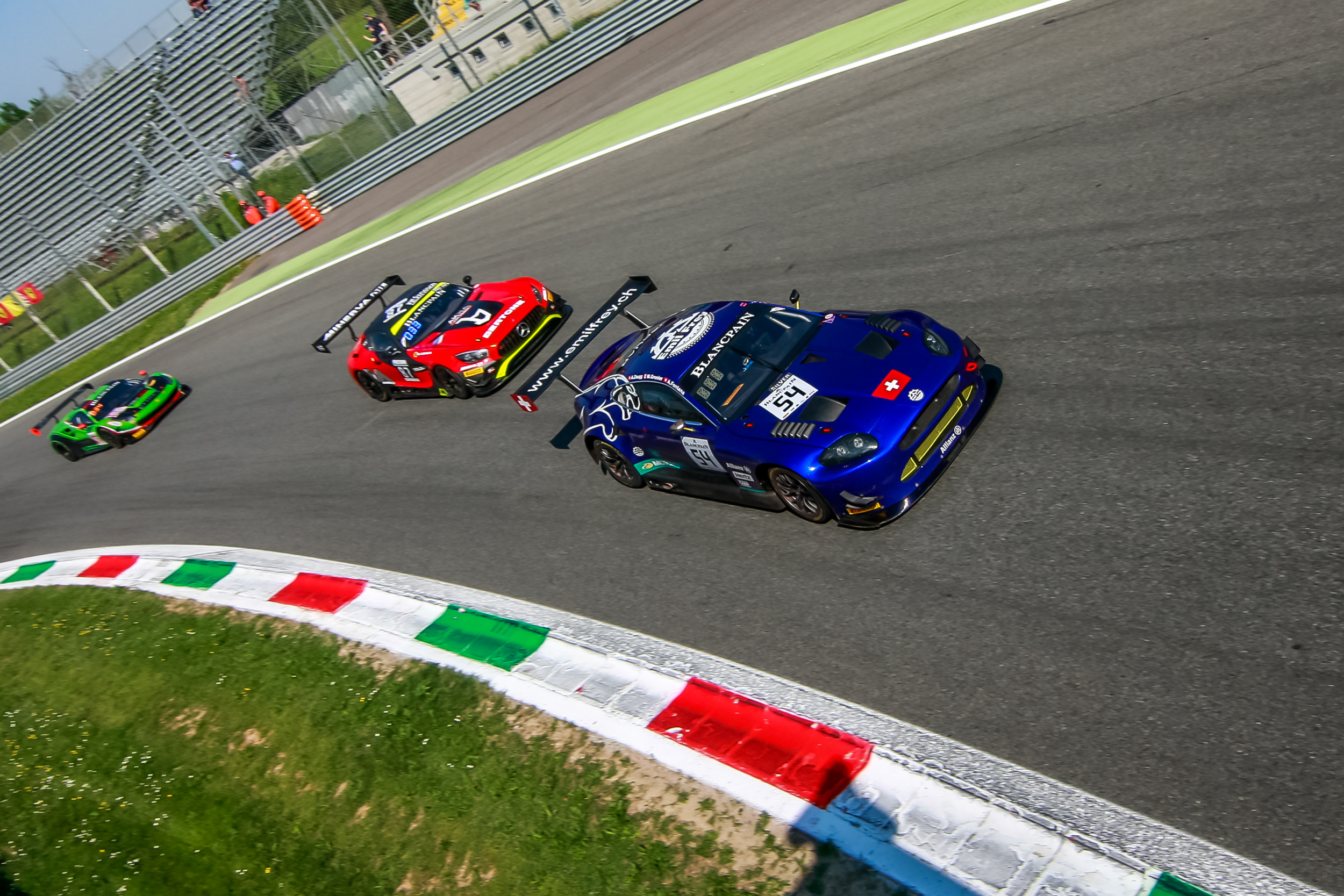 One of the real standouts of the Monza event was the #54 Emil Frey Racing G3 Jaguar. Entered in the Silver Cup class, the young crew of Alex Fontana, Adrian Zaugg and Mikael Grenier were the stars of qualifying, with all three drivers setting similarly fast times to bag a superb second on the grid.

Each driver raced with the front-runners and acquitted themselves extremely well. Were it not for issues at the end of full-course yellow periods, the Jaguar might even have had a sniff at the overall podium. As it was they took P5 and were comfortable class winners.

The veteran Jaguar is competing in the Blancpain GT Series on a part-time basis this season, and Fontana explained that the Emil Frey squad have identified the tracks that it will work best at to maximise its chances of success. If their showing at Monza is anything to go by, 2018 should be a fitting send-off for the Jaguar in what is the final year of its homologation. 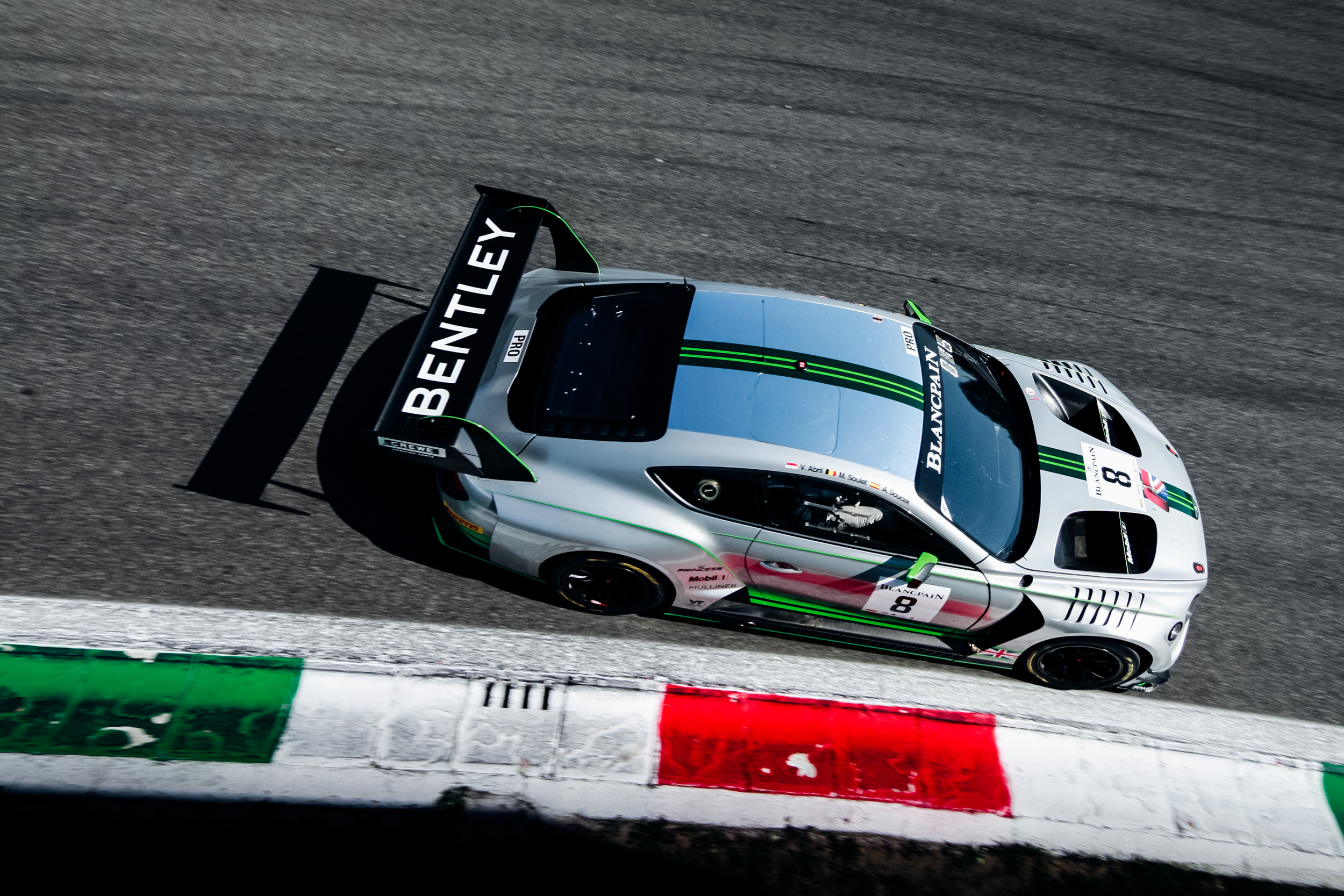 Both showed good pace in qualifying. Nissan ace Lucas Ordonez was quickest of all in the second session, suggesting that the new-spec GT-R is a fundamentally fast machine. The #23 entry eventually slipped to 10th once all three segments were complete, but it represented a very respectable start for the GT Sport Motul Team RJN-run car. 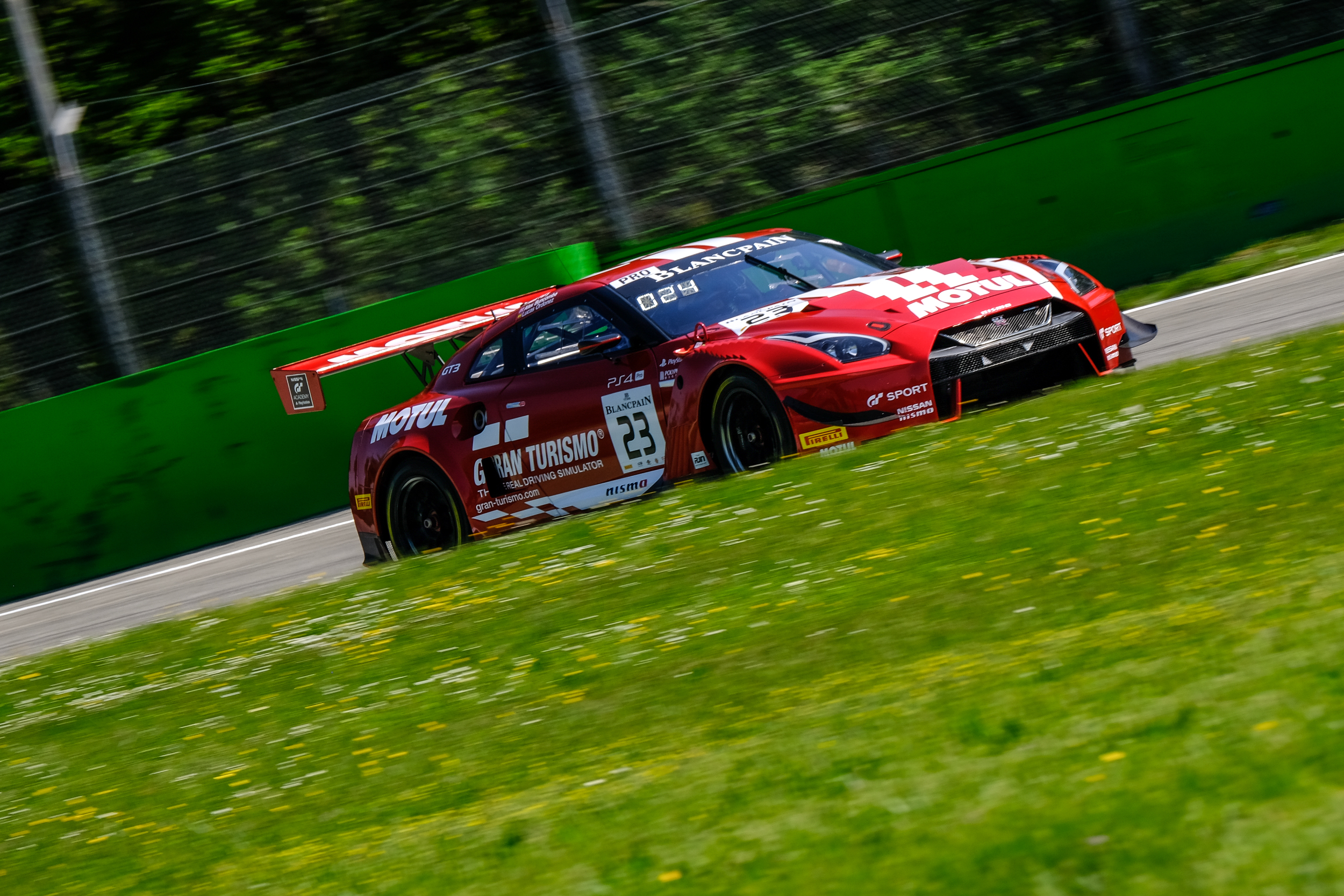 Unfortunately, their race was scuppered before it had begun when a technical problem forced the #23 to start from the pits. They eventually finished 42nd, five laps down on the leaders, but Ordonez still left Monza pleased with the pace he was able to show in qualifying.

Bentley also broke into the top-10 on the grid thanks to their #8 car, driven by Andy Soucek, Maxime Soulet and Vincent Abril. The M-Sport-run team endured a fraught race, with a number of on-track incidents leaving the #7 of Guy Smith, Jules Gounon and Steven Kane to finish 23rd. The #8 came home behind the Nissan in 43rd, but there was satisfaction at the fact that both new Continental GT3s had finished the three-hour contest 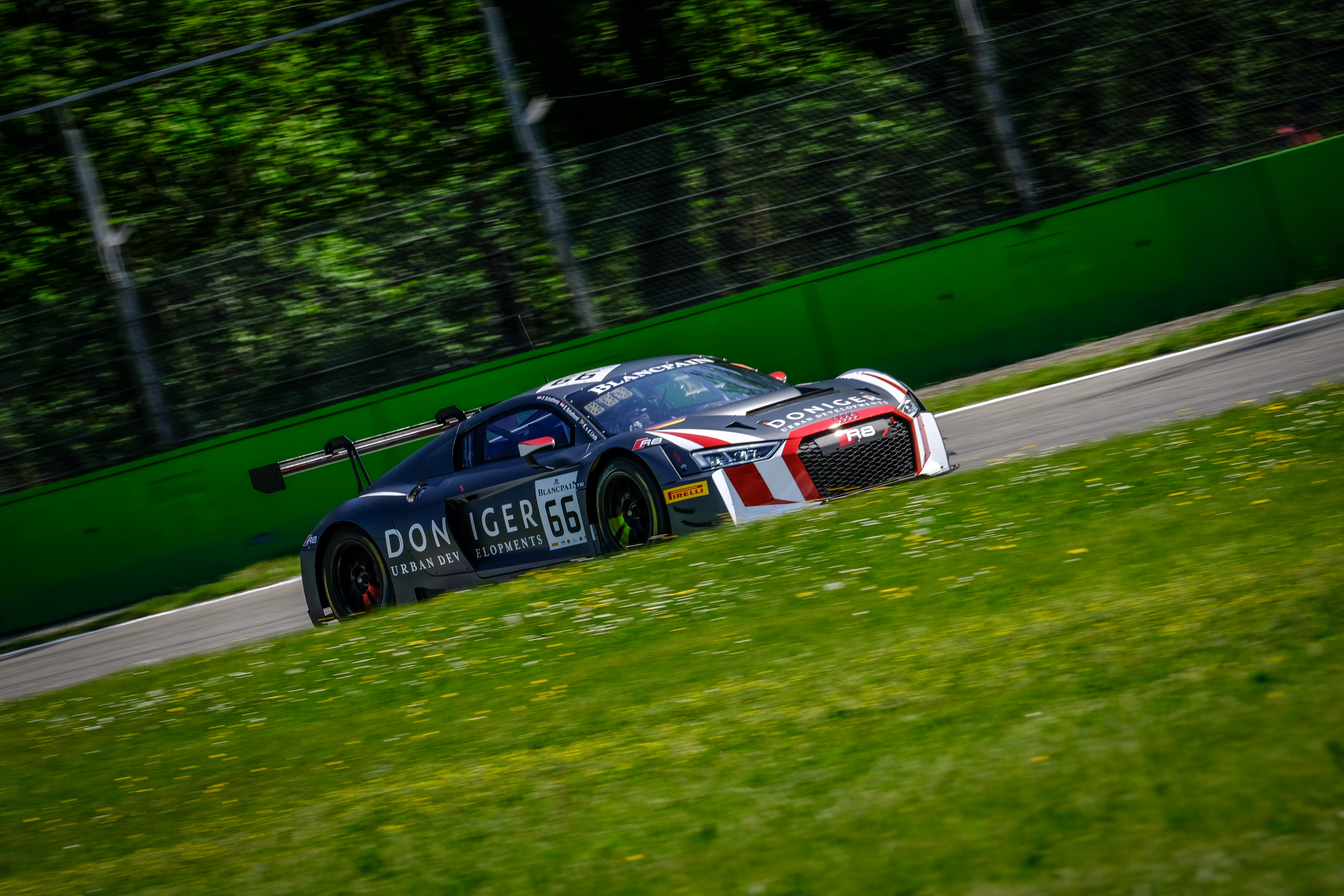 Team WRT’s win put them at the front of the Audi runners at Monza. But, while their #1 was the leading R8 LMS, the next in line was the Attempto Racing machine shared by Kelvin van der Linde and the Schothorst brothers, Pieter and Steijn.

The #66 Audi had a quietly impressive run at the Italian venue, and it was felt that a podium was within reach were it not for a re-fuelling issue.

The #66 took Sprint Cup victory at Zolder with Steijn and Kelvin at the wheel and both drivers have since said they are hopeful of mounting a title challenge. A strong finish at Monza – not a circuit that traditionally favours Audi equipment – will only strengthen their belief. 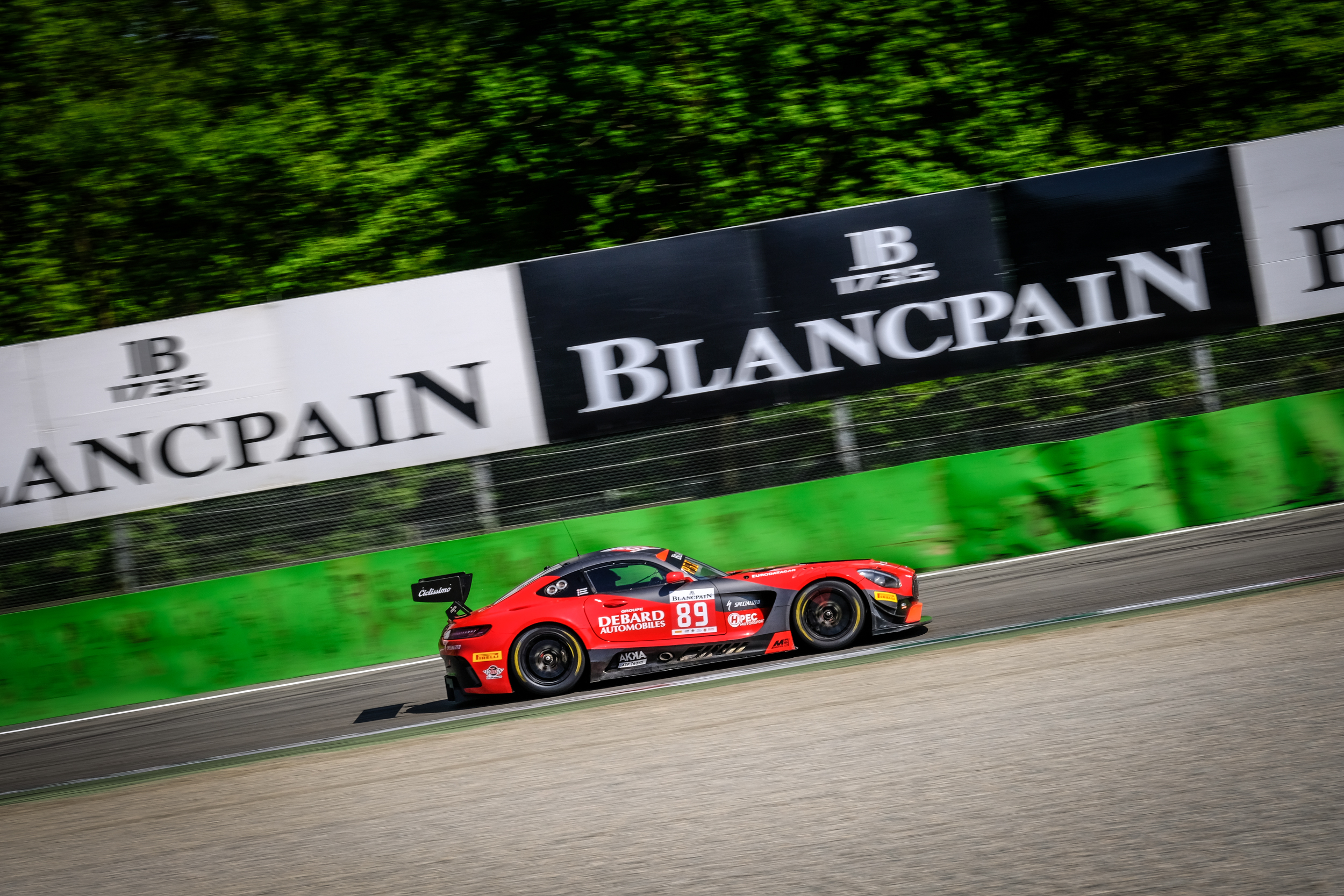 Monza was the first time that Philippe Giauque, Eric Debard and Fabien Barthez had raced together, but the AKKA ASP Team trio looked like old friends in their run to Am Cup victory.

The trio started from pole in their Mercedes-AMG GT3 and were a lap ahead of their nearest class rivals by the chequered flag, suggesting that this new team has gelled quickly.

Giauque was in buoyant mood after the race, his first in the series for more than a year, speaking enthusiastically about his return to competition – as well as the perfect weather enjoyed at Monza over the weekend.

The trio are signed up to contest the full Endurance Cup campaign and look a strong early bet for the Am Cup title.

Any spectators who remained at the circuit after Friday’s testing session had concluded might have witnessed a unique sight.

Rather than heading back into their garages, cars were being pushed out on to the start-finish straight. At first there seemed to be no order about what was taking place, but over the next few minutes a shape began to emerge on the Monza tarmac.

The cars were spelling out the letter P – specifically, the elongated P used by tyre manufacturer Pirelli, which provides rubber for every competitor in the Blancpain GT Series.

A total of 41 cars were used, with each of the 12 manufacturers participating at Monza represented. The shot recreated a historic photo captured in 1978, though this time the cars were racing machines rather than road-going models.

The image celebrated the long-running partnership between Pirelli and the Blancpain GT Series – and what better place to do so than Monza?

With the Sprint and Endurance portions of the Blancpain GT Series season now underway, the battle for the overall titles is beginning to take shape.

In the teams’ standings, Belgian Audi Club Team WRT lead the way with 45.5 points from the opening two events, followed by reigning champions Grasser Racing on 39 and Attempto Racing on 34.

Vanthoor leads the drivers’ table on 38 points. The Belgian is paired with Will Stevens for Sprint events but joins Mies and Riberas for Endurance Cup rounds, so he stands alone at the top. Mies and Riberas are close behind on 34.5 points, with reigning champions Mirko Bortolotti and Christian Engelhart also keeping close company on 32.5.