Glorious April sunshine saw fans flock to the Italian venue in impressive numbers, with the roar of GT3 engines providing a fitting soundtrack to a closely fought contest.

The #1 crew of Christopher Mies, Alex Riberas and Dries Vanthoor took the win – the first in Blancpain GT Series history for Audi in Monza – ahead of a pair of Mercedes-AMG GT3 machines, with the #43 Strakka Racing and the #4 Black Falcon crews completing the podium.

The #1 Audi R8 LMS started in fourth with Mies at the wheel, slipping to fifth during the first stint and remaining there when Riberas took control.

But their focus was always on the concluding stint, which would be handled by Vanthoor. The young Belgian emerged from the pits for his run and quickly passed the #63 Grasser Racing Lamborghini, bringing the #1 car into contention for victory. 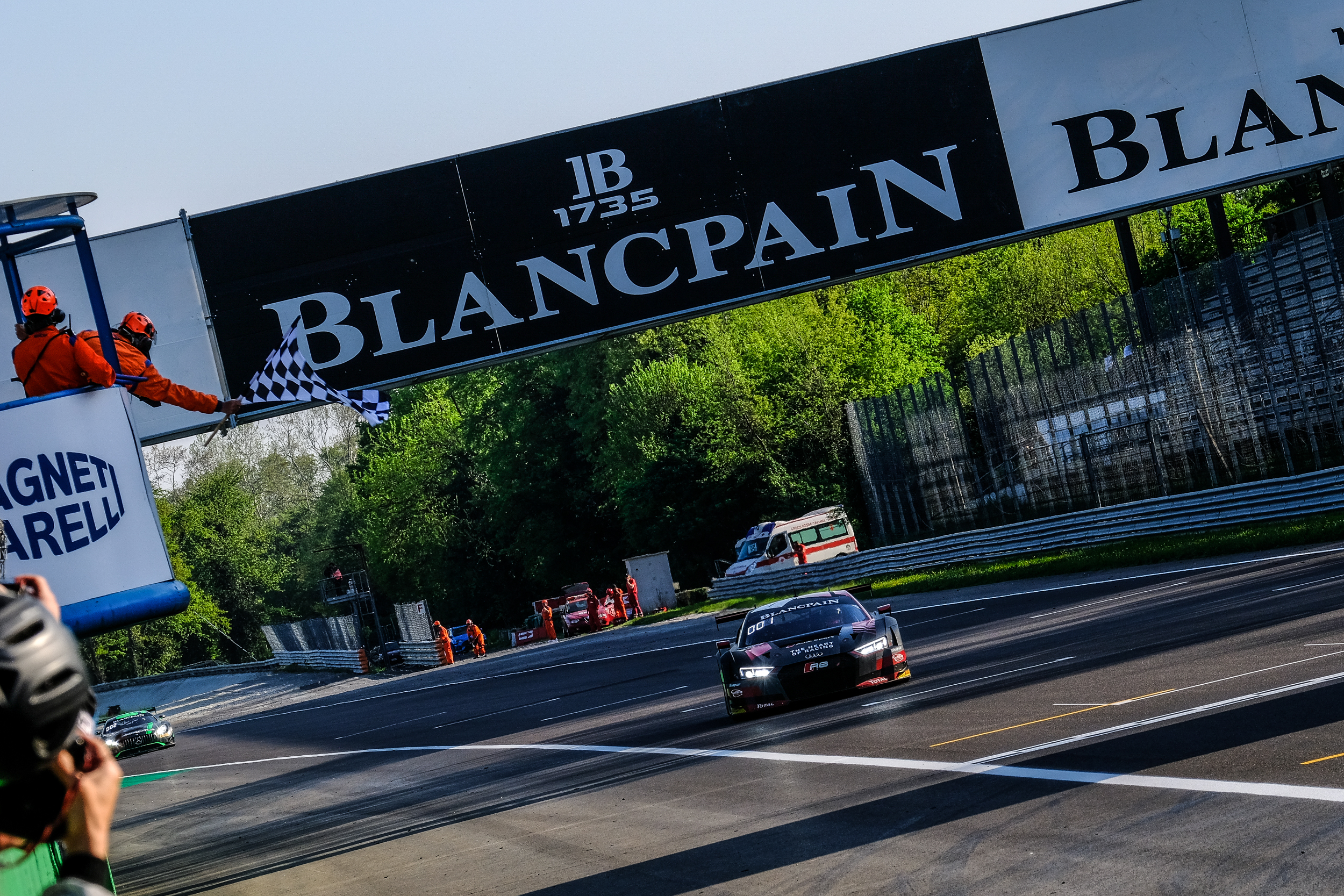 As the final stint developed, the Audi was in sight of the leading #43 Strakka Racing Mercedes-AMG GT3. After Alvaro Parente took the first stint, the British-based team hit the front during the second phase of the race when Maxi Buhk made a stunning pass on the #72 SMP Racing Ferrari around the outside of Curva Parabolica.

Götz took over for the final stint, but Vanthoor quickly closed up to the rear of the Mercedes. The Belgian was able to make a pass, but was then required to hand back the position having exceeded track limits.

Vanthoor was on a charge, however, and got an excellent run on his rival heading to the first chicane. Götz squeezed the Audi and was adjudged to have pushed the #1 car. The Strakka driver was soon instructed by the race director to give up the lead and Vanthoor duly took top spot. He did not face a major threat thereafter, eventually securing the win by a little over two seconds.

Third was just as hotly contested. The #63 Grasser-Lamborghini had quietly made good progress from 14th on the grid thanks to Mirko Bortolotti and then Andrea Caldarelli, allowing Christian Engelhart to run third during the final stint.

But the German driver faced huge pressure from the #4 Black Falcon Mercedes-AMG GT3, which had shown excellent pace at all stages of the race. Yelmer Buurmann handled the final stint and, after a superb defensive display from Engelhart, was finally able to make the pass with only six minutes of racing remaining.

That completed an eventful run to the podium for the German squad. Maro Engel had been fast in the first stint, but the #4 lost track position due to a drive-through penalty for a full-course yellow infringement. But, after Luca Stolz tackled the second stint and recovered ground, Buurmann made a strong finish to secure a spot among the top three.

For much of the race it looked as though local favourites Ferrari would occupy one of those positions. The #72 SMP Racing machine had started from pole and led for much of the first two hours, with Miguel Molina pacing the first stint and Mikhail Aleshin retaining P1 for much of his time aboard the car.

But after the Russian was passed by Buhk the crew subsequently lost time during the final driver change. Davide Rigon took over the #72, but it was soon pushed into the garage with problems, calling time on what had been a promising effort.

Silver Cup honours were never in doubt, with the #54 Emil Frey Racing G3 Jaguar dominating the class in both qualifying and the race. After holding second overall during the first stint the #54 was eventually shuffled back to fifth, but finished well clear of its nearest Silver Cup rival.

In fact, it took the chequered flag just 3.3 seconds shy of a spot on the overall podium, capping a superb weekend for the team and drivers Alex Fontana, Adrian Zaugg and Mikael Grenier.

Rinaldi Racing ensured that Ferrari emerged with silverware from the Monza weekend by taking class victory in Pro-Am. The #333 team recovered from an early spin to steadily climb back up the order and eventually hit the front, where they spent the second half of the race.

Rinat Salikhov handled the opening stint, after which Domink Schwager took the controls of their Ferrari 488 GT3. Alexander Mattschull brought the car home, completing an excellent display by the team.

In the Am Cup category it was the pole-sitting Mercedes-AMG GT3 of AKKA ASP Team that took top honours. The crew of Fabien Barthez, Eric Debard and Philippe Giauque were a lap clear of their nearest challengers, completing a very polished performance from the #89 drivers.

Following the three-hour Italian encounter the Blancpain GT Series returns to Sprint Cup action in two weeks’ time at British circuit Brands Hatch, where a pair of 60-minute races will be contested on 5/6 May.

The next Endurance Cup engagement is at Silverstone on 18-20 May, where the Belgian Audi Club Team WRT crew will be looking to capture another long-distance win at a historic circuit.

Dries Vanthoor, #1 Belgian Audi Club Team WRT Audi R8 LMS: “After Alex gave me the car in P4 I managed to gain two positions quite quickly. First I overtook the #72 Ferrari, then the #63 Lamborghini. Next I managed to get on to the tail of the Mercedes, which led to a good fight. This track does not suit us the best, but we had a good strategy and that helped us to take a first Blancpain GT Series win for Audi at Monza.”

Maxi Buhk, #43 Strakka Racing Mercedes-AMG GT3: “I was struggling a bit with the balance, but I still managed to make progress, have a few nice fights and overtake some cars. Then I managed to get some clear laps without too much traffic, which enabled me to push a lot. I think the #72 Ferrari had some tyre issues and I managed to overtake it at Parabolica. I am really happy about this weekend and I think it was a great effort from Strakka Racing.”

Yelmer Buurmann, #4 Black Falcon Mercedes-AMG GT3: “When I came out of the pits I wasn’t sure what position we were in. I realised that we were P4 thanks to a really good stop, and managed to close the gap to the Lamborghini of Christian Engelhart. The corners at Monza are not easy and it’s all about managing the tyres and trying to find a gap. Finally, I managed to stay on the inside of the Parabolica before passing him at the first corner.”

Mikael Grenier, #54 Emil Frey Racing G3 Jaguar: “We had a strategy issue during the full-course yellow, which lost us some positions. This was unfortunate as the team did a great job throughout the whole weekend. I had  a good stint even if we did struggle in the traffic. The Jaguar can’t break as late as the others and I didn’t want to take any risks.”

Alexander Mattschull, #333 Rinaldi Racing Ferrari 488 GT3: “I just had to bring the car home safely as my team-mates did a perfect job by giving it to me in such a good position, which we did not expect after the start. Overall we had a great weekend and winning with a Ferrari at Monza is a very special emotion.”

Philippe Giauque, #89 AKKA ASP Team Mercedes-AMG GT3: “This was my first Blancpain GT Series start in more than a year, so it was tricky – especially at Monza. We decided to stay calm and wait for others to make mistakes, which happened a few times during my hour of racing. I really enjoyed it. This is the first time we three have driven together and we won, so it was a pleasure. We’ll do the whole Endurance Cup season, including the Total 24 Hours of Spa, so I am very happy.”