The quiet of the winter months will be broken by the roar of engines when the Blancpain GT Series launches its 2018 campaign at Zolder on April 7th-8th.

The season-opening encounter will see teams and drivers looking to lay the foundations for a successful year at the undulating Belgian track, which has traditionally been a happy hunting ground for local favourites Team WRT.

The event will see reigning Sprint Cup champions Stuart Leonard and Robin Frijns kick off their title defence with the Baudour-based squad, once again piloting the team’s #17 Audi R8 LMS.

Last year it was the sister machine of Will Stevens and Markus Winkelhock that clinched victory in Zolder’s main race and both drivers will be targeting more of the same this weekend, though Winkelhock has decamped to rival Audi squad Sainteloc Racing for the 2018 season. Stevens remains in situ at WRT, where he is paired with young charger Dries Vanthoor.

The four-car Team WRT effort, which also features Christopher Mies and Alex Riberas, leads a formidable charge by Audi. The German brand will have eight cars on the grid at Zolder, making them the best-represented manufacturer at the event. Their contingent is completed by two entries each from Sainteloc Racing and Attempto Racing.

The opening Sprint Cup round also sees Mirko Bortolotti and Christian Engelhart begin their defence of the overall Blancpain GT Series title aboard Grasser Racing’s Lamborghini Huracan GT3. In what was a near-perfect 2017 season Zolder was the only event at which the champions failed to score points, something they will be hoping to put right this weekend.

The Grasser Racing outfit will deploy a trio of their Pro class Huracan GT3s at Zolder as they take aim at yet more silverware in 2018. The Italian marque is also represented by Belgian squad Boutsen Ginion Racing, who will field a Lamborghini Gallardo R-EX in the Am Cup.

Team and manufacturer will combine to field a brace of cars in the both the Sprint and Endurance Cups this term as they look to challenge Grasser Racing for the overall Blancpain GT Series title. They will be represented at Zolder by Christian Klien and Albert Costa in the #14 Lexus RC F GT3, while Stephane Ortelli and Norbert Siedler will handle the #114 machine.

The AKKA ASP squad will field a trio of Mercedes-AMG GT3s this weekend, with full-season driver Raffaele Marciello leading the assault aboard the #88 car. He is joined by British ace Michael Meadows, while Felix Serralles and Nico Jamin will share the sister #87 machine.

The French squad will field a third entry in the Silver Cup for Jack Manchester and Nico Bastian. Among their rivals will be Team Parker Racing, who will deploy their Bentley Continental GT3, with Joshua Caygill pairing up with series newcomer Aron Taylor Smith. The 3Y Technology squad will also compete for Silver Cup honours, with Andrew Watson and Lukas Moreas piloting a BMW M6 GT3.

Finally, Ferrari are represented by a pair of Pro-Am entries from Kessel Racing. The #11 Ferrari 488 GT3 will be driven by Michael Broniszewski and Giacomo Piccini, while the #39 – which competes under the TP 12-Kessel Racing banner – combines the talents Thai racer Piti Bhirombhakdi and Dutch ace Carlo Van Dam.

The weekend will see the Sprint Cup return to a traditional format with two 60-minute races – one on Saturday, another on Sunday – each of which pays equal points. In both races, there will be a mandatory driver change between the 25th and 35th minute.

There will also be two qualifying sessions, with each driver contesting one and starting the corresponding race. What’s more, points will be awarded to the team and drivers that take pole in each session.

This highly competitive field should ensure the new season starts with a bang at Zolder, which moves from its previous June date to become the curtain-raising event for the 2018 Blancpain GT Series.

The on-track action begins with free practice on Friday (6 April). Both qualifying sessions will take place on Saturday morning, followed by one-hour races on Saturday at 15.25 and Sunday at 13.30 local time.

Mirko Bortolotti, Grasser Racing Lamborghini Huracan GT3: “Obviously the championship is long and it’s not going to be won at Zolder. We showed last year that the potential is there, but the competition is not resting and the level is very high in the Blancpain GT Series. We’ll really try to focus on ourselves and do our homework as best as possible and be well prepared. Then we need to take our chances, be consistent and quick throughout the year.”

Stuart Leonard, Team WRT Audi R8 LMS: “Winning the Sprint Cup title last year with Robin was the greatest sense of satisfaction I’ve had in my career. The standard of competition is really high so to win it was just amazing. Testing has gone well, but in the end you don’t know what’s going to happen until the first race. Last year the first two rounds weren’t great for us but we pulled it back to win the title, so anything can happen over a season – that’s motorsport.”

Christian Klien, Emil Frey Lexus Racing Lexus RCF GT3: “This will be the first time for me doing the full Blancpain GT Series and I’m particularly excited about the Sprint Cup. It’s proper racing – one hour, flat out – so I’m really looking forward to that. We know we have a good product from Lexus and Emil Frey Racing has put all the pieces together to be successful this year.” 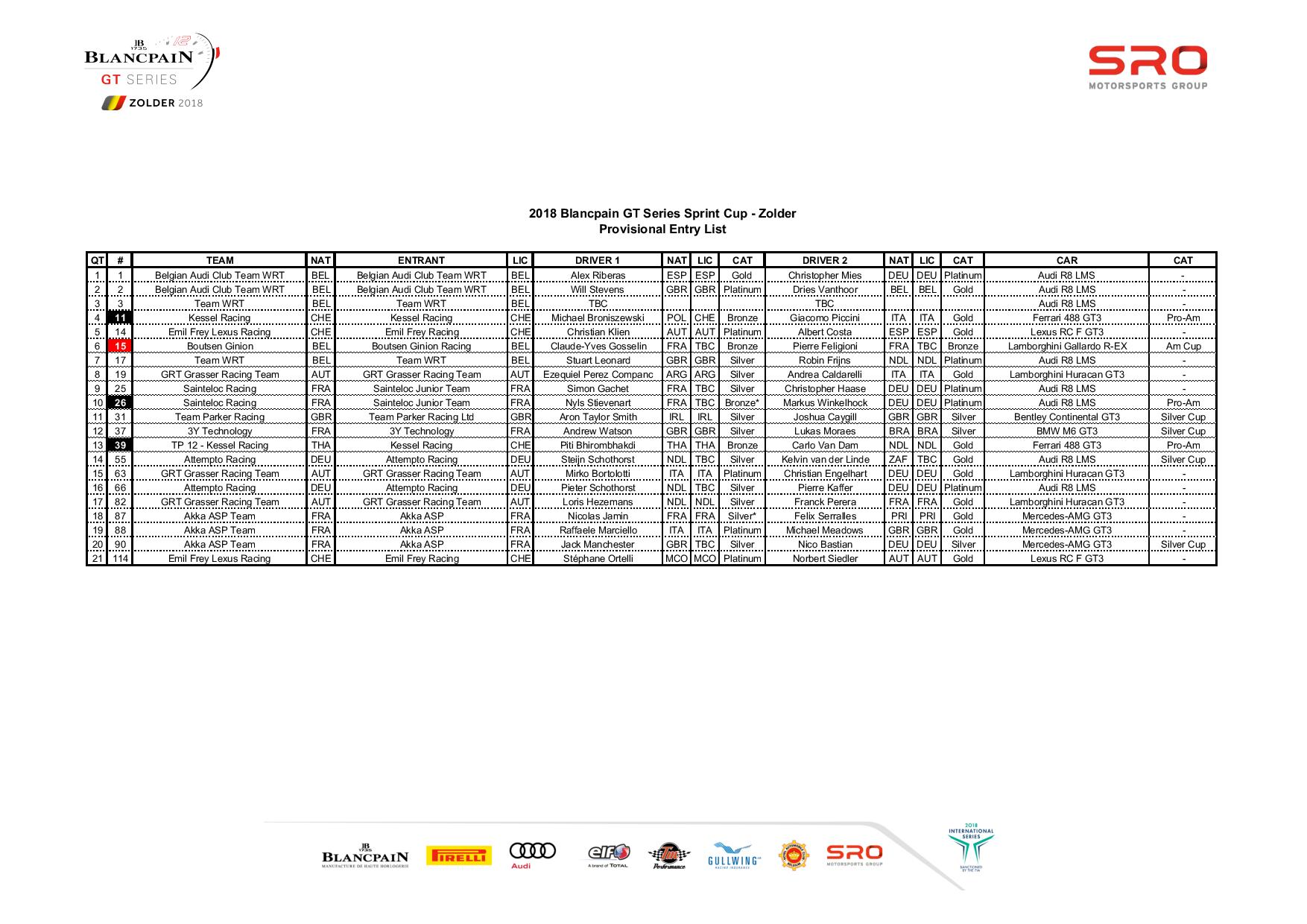