Blancpain GT Series fans across the globe will enjoy extensive coverage of the 2018 season, with TV and online broadcasts combining live programming and highlights packages of the most competitive GT racing on the planet.

The series will continue its successful relationship with Eurosport in 2018. The pan-European network of channels is available in 54 countries across the continent and broadcasts in 20 different languages.

Eurosport will broadcast all five Sprint Cup races live or as-live this season, while each Endurance Cup event will combine live action with highlights. What’s more, the channel’s dedicated coverage will also include a highlights programme that will air on the Tuesday following each race weekend at 23:30 CEST.

In the UK, leading broadcaster BT Sport will continue their association with the series by airing live coverage of all five Sprint Cup rounds and highlights from each Endurance event, including the 70th edition Total 24 Hours of Spa.

European viewers will also be able to follow the championship on Motorsport TV, which will once again broadcast all 10 rounds of the Blancpain GT Series live and in full. The channel’s extensive list of territories includes France, Germany, the Netherlands, Belgium and the UK.

Further agreements in individual countries across Europe will ensure extensive coverage in the series’ heartland, such as RTL 7 in the Netherlands, Sport TV in Portugal, Nova Sports in Greece and Cyprus. And of course Belgian broadcaster RTBF will have extensive live coverage of the Total 24 Hours of Spa.

Across the Atlantic, the Blancpain GT Series will also continue to command a significant presence in the United States and Canada this season following the extension of its partnership with CBS Sports Network.

This agreement will comprise full as-live broadcasts of all five Sprint Cup races, with the action slated to air on the Sunday of each race weekend in prime slots. Added to this, there will be highlights of each Endurance race throughout the upcoming campaign.

To ensure a truly global presence, further partnerships have been agreed with a trio of regional Fox networks. Fox Asia will take the series to an extensive audience that includes Indonesia, Malaysia and Thailand. Fox Latin America ensures coverage that extends to Mexico, South and Central America and the Caribbean. And Fox Africa will add a list of territories that includes Nigeria and South Africa to the Blancpain GT Series roster.

What’s more, China will be served by highlights aired on the Star Sports network.

Some global motorsport magazine programmes carry the Blancpain GT Series, such as Mobil 1 The Grid, Sports Unlimited, Pure Outdoor, Only Live Once and Action Sport World.

As well as comprehensive television coverage, fans will have access to every racing lap of the 2018 season thanks to live web streaming on YouTube, Dailymotion, the official Blancpain GT Series website, the free Blancpain GT Series app and its social media channels. Commentary in both French and English will be available for free.

These broadcasting agreements and the live web streaming provide fans with multiple ways to follow the full 2018 Blancpain GT Series season. With a grid of world-class drivers representing 11 different manufacturers set to do battle over 10 races, it promises to be appointment viewing from green lights to chequered flag. 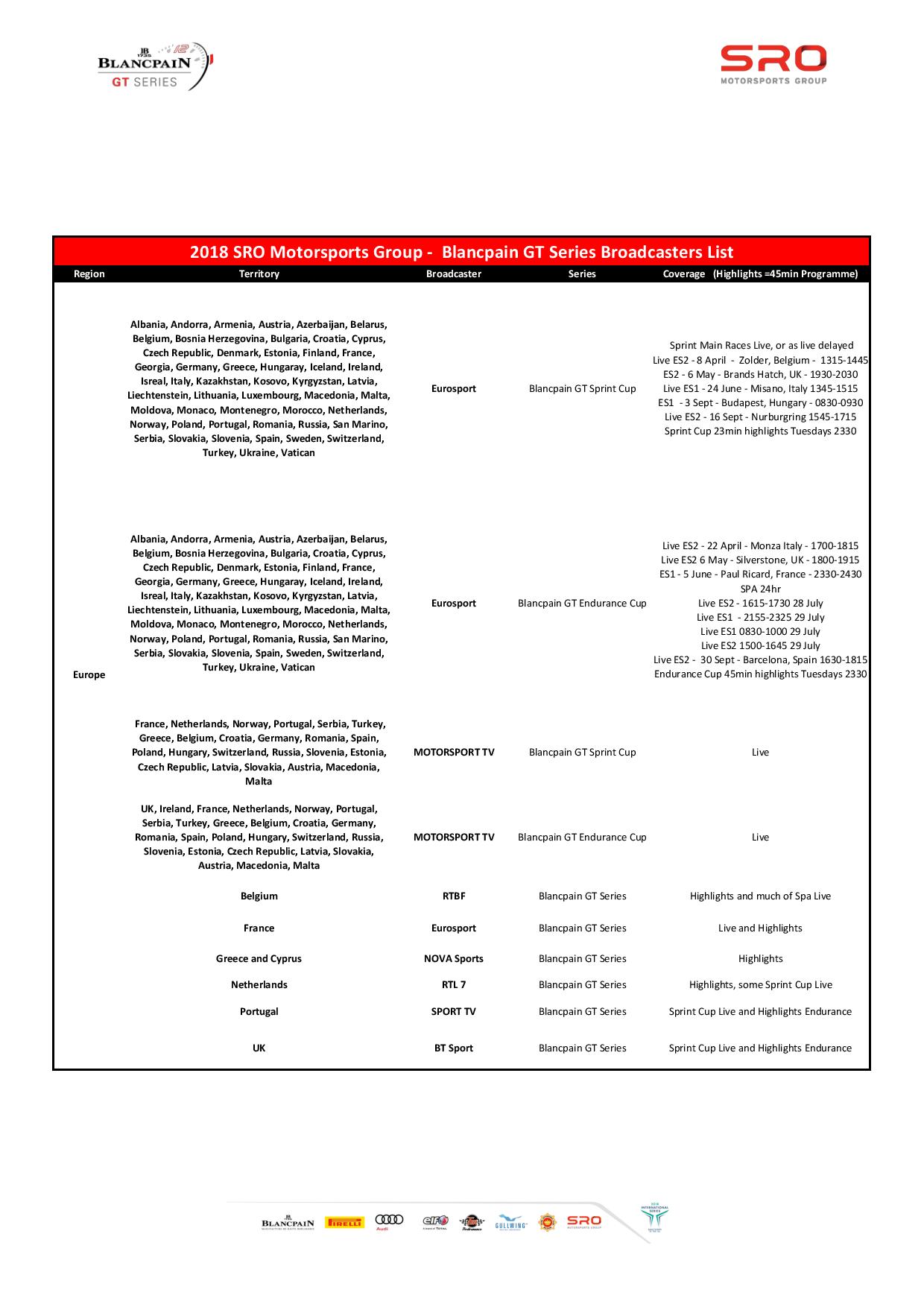 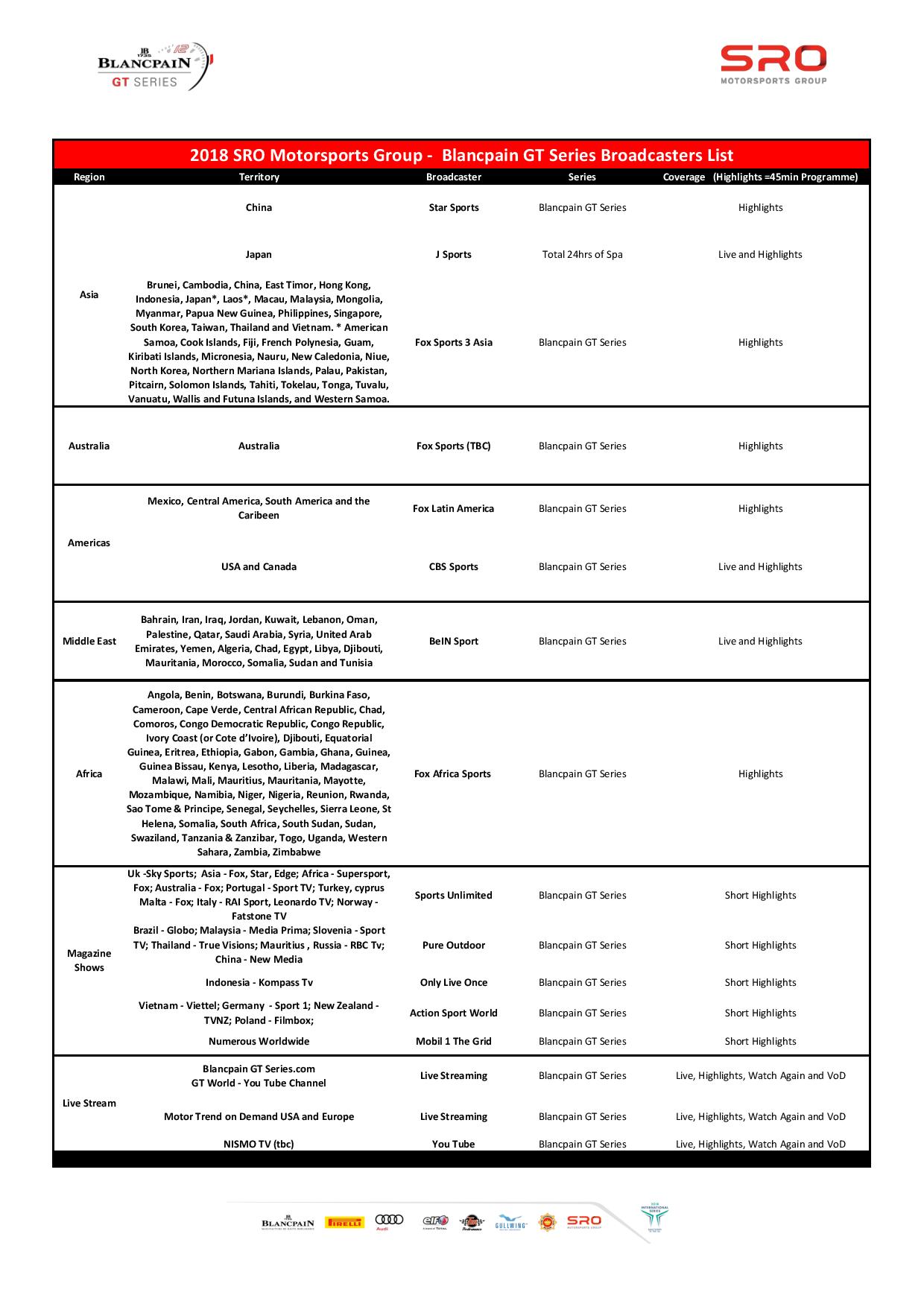